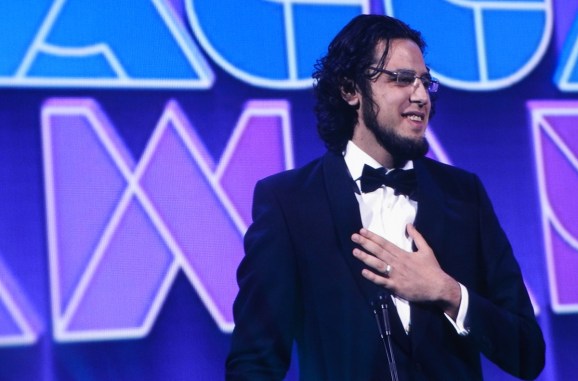 Rami Ismail, cofounder of Vlambeer, accepted one of the gaming industry’s highest honors — the Game Developers Choice Ambassador Award — for his work in speaking out against injustices and raising awareness about them.

Ismail is a Dutch video game maker of Egyptian descent, and he is the first Muslim to receive the honor at the Game Developers Conference in San Francisco. Among his deeds: Helping to organize the #1ReasonToBe diversity panel at the GDC, at significant financial expense for his company. He travels frequently and often speaks out on issues related to fairness and diversity.

“Their presence here tonight means the world to me,” he said in his acceptance speech.

He said he realized he was far from perfect, and he was thankful for those who helped him and supported him, including his cofounder Jan Willem, who Ismail said has helped him without reservation in supporting causes on Vlambeer’s time — “and pushes me to stand up for what is right.”

He said he was thankful for his wife, Adriel, who he met through games and who proposed marriage to him through games. He said she pushes him to be a responsible, hard-working, generous, and inspiring creator. He thanked players and game developers.

And Ismail said he was thankful for all those who enable people to make games, regardless of sex, race, gender, sexuality, ideology, heritage, history, country, culture, disability, socio-economic reality, age, or situation.

“I am thankful to those of you who participate in this medium despite feeling or being treated as different, or out of place,” he said. “Being an ambassador can only be a point of pride if you believe that that which you represent is valuable. Throughout my life, I have seen games give people joy, wonder, curiosity, expression, education, friendship, and love through both play and creation.”