Roblox has built a Lego-like virtual world where kids and teens can create their own games, and now it is drawing more than 50 million players every month on PCs, consoles, and mobile devices.

Those players come to play games that are created by other players, who can make money from the number of times their games are played. In 2017, 11 million titles were produced by two million creators on Roblox, said Craig Donato, chief business officer at Roblox, in an interview with GamesBeat. Roblox had a million creators just a year earlier.

On top of that, 1,500 of those titles have received more than 1 million views. And the company had hundreds of millions of dollars in billings in 2017, up 158 percent from a year earlier, Donato said. And Roblox is now cash-flow positive, he added.

“Our mission is about inspiring the imagination,” Donato said. “With the style of play on Roblox, our experiences are open and experiential.” 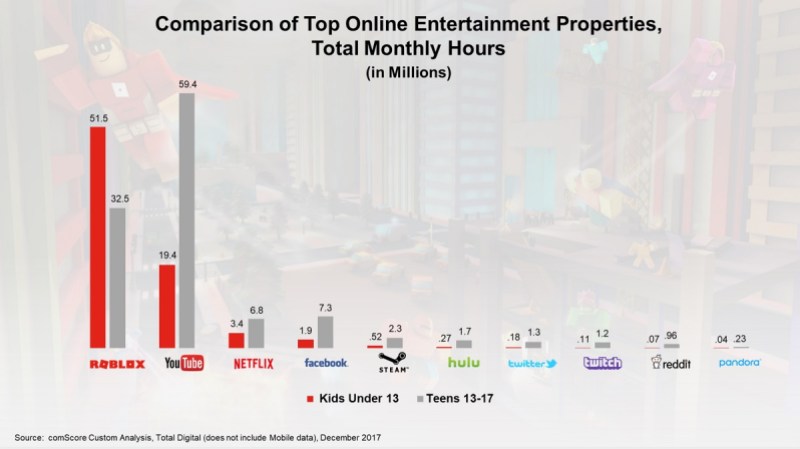 Above: Roblox beats out YouTube at the younger demographic.

And the company shares proceeds with game creators. In 2017, game creators received more than $30 million from Roblox.

“At the high end, kids are forming virtual studios, and our top creators are making $2 million to $3 million a year,” Donato said.

A study by measurement firm ComScore found that for kids under 13, Roblox gets more monthly hours on the desktop from its visitors than YouTube.

“We feel really good about those numbers,” Donato said.

“I am very excited to be joining Roblox at this time of hyper growth,” said Guthrie. “2017 was a pivotal year for the company and I am confident we will continue to deliver strong financial metrics as the Roblox platform continues to scale.”

Roblox is based in San Mateo, California, and it has more than 300 employees. The company hopes to double its staff and built out its international teams. 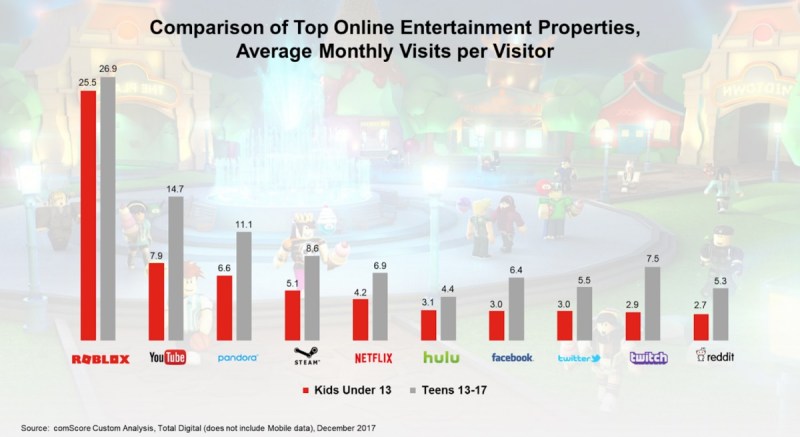 Above: Roblox is coming out on top with teens and kids.

“Our goal is to be a next-generation entertainment platform,” Donato said. “Audiences are shifting from passive to immersive interactive experiences.”

Right now, Roblox is running a partnership with Steven Spielberg and Warner Bros. on the upcoming Ready Player One film, which debuts next week. Roblox’s members can reproduce the big quest from the film (and its book by Ernest Cline) inside the world of Roblox.

“We see Roblox as today’s version of the Oasis,” the virtual world of Ready Player One, Donato said.