I’ve finished playing the new two-player co-op game A Way Out from Electronic Arts and development studio Hazelight. Josef Fares, the writer director of the game, comically told me that “you can break my legs” if I didn’t like the game. This story about two convicts who escape from prison together turned out to be an enjoyable tale that was worth the long wait. I’m glad I won’t have to break his legs.

As it was a two-player game, I played it on a PlayStation 4 with my friend Gary Roberts, who took a vow of silence not to talk about it until this review appeared. He kept his promise and I won’t have to break his legs either (though he kind of did that to himself). We played it on my couch in one seven-hour sitting. The game comes out as an EA Originals title on consoles and PC for $30 on March 23.

I can’t say that I’ve ever played a game like A Way Out. The closest thing was Fares’ previous work, Brothers: A Tale of Two Sons, which was one of my favorite games of 2013. But that was very different, as it was a single-player game that received a lot of kudos for its emotional story. A Way Out shares the emotional tug, but it’s like a cousin to Brothers, and it is unique. Here, two players use controllers to pry the story out of the game.

In this game, two players play together and try to solve problems at the same time. Each can choose a different path, since each can play fully on one side of the split screen. Sometimes they come together into a single cinematic or gameplay scene. There were plenty of moments when that was satisifying, as if we achieved a goal and kicked back to collect our reward.

I played the brash and impetuous Leo while Gary played the calm and collected Vincent. It was an interesting experience that taught me that subtle differences in behavior can lead to some drastic differences in life-or-death choices. 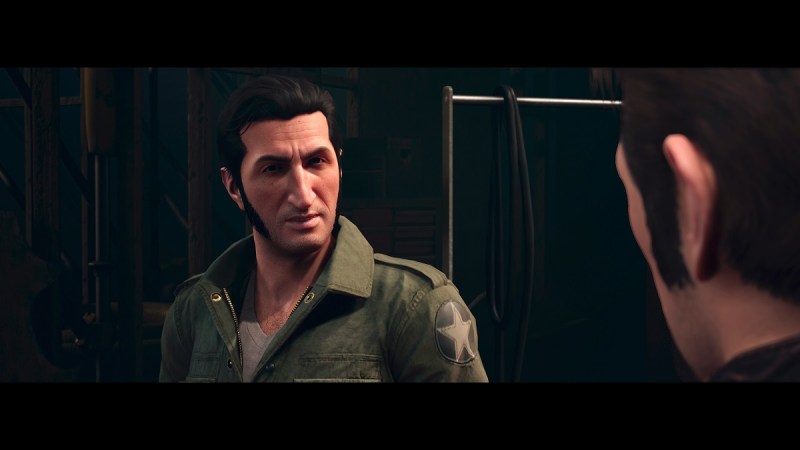 Above: Leo is on the left, and Vincent on the right.

At the outset, you make a choice between playing Leo or Vincent. They have different personalities, and the story throws circumstances at them where it makes sense that they overcome these differences and learn to work together.

Leo is the kind of guy who is willing to charge into a gas station store and pull a fast holdup with his gun drawn (see the video). Vincent, by contrast, is thoughtful. He will casually walk into the store, case the joint, and then act in way that achieves the optimal outcome.

The story has a filmmaker’s pacing 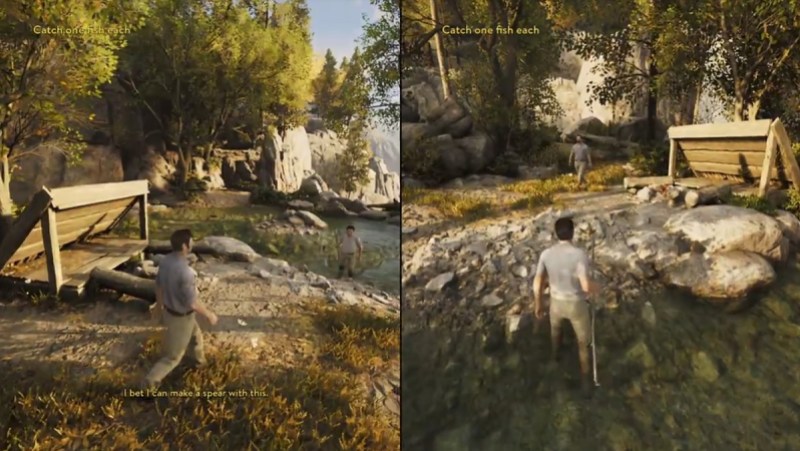 Above: Leo and Vincent go fishing in A Way Out.

The narrative of A Way Out isn’t just a straight line of constant action. It has its slow points, like when the escaped duo realizes they have to eat. They go fishing and try to catch some fish using spears. This slows down the pace of the escape and gives the characters some quiet time to become reflective.

And that’s one of the moments where you find out more about one of the characters, like what makes them tick and why they make the decisions they do. That slow moment for fishing serves its purpose of creating the opportunity impart an important part of the story. Then the action picks up as you pick up the escape again and proceed with the fast-paced events that come next.

This kind of pacing feels like the way a filmmaker sets up both emotional highs and lows, and it kept me from getting bored. The circumstances change, surprises happen, and the pace picks up again.

It doesn’t waste your time 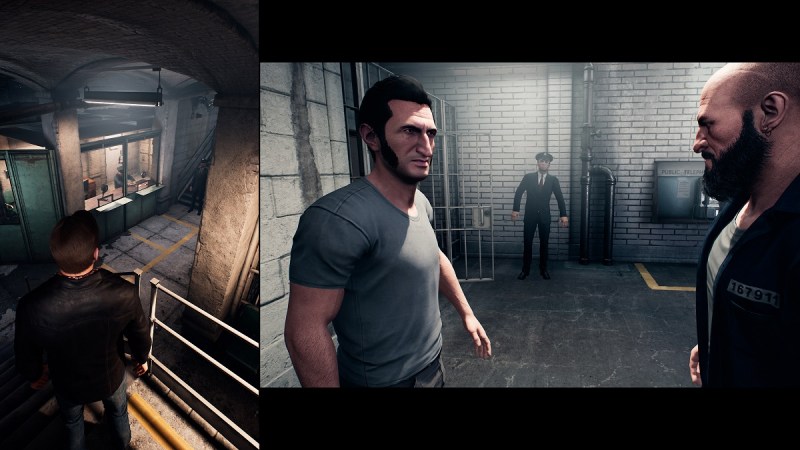 Above: Leo can distract somone while Vincent moves down a different path in A Way Out.

There’s a moment when the two prisoners are on the cusp of a breakthrough. Then they realize they forgot something, and it sets them back. But rather than force the players to repeat the whole exercise, Fares just skips ahead to the next scene.

There’s also a moment when Leo has to do some side-scrolling fighting. Rather than have this happen again and again, it happens just once during the whole game. It is a complicated system created so that it works right, but it only appears once. That’s because Fares doesn’t want it to be a boring and repetitive experience. 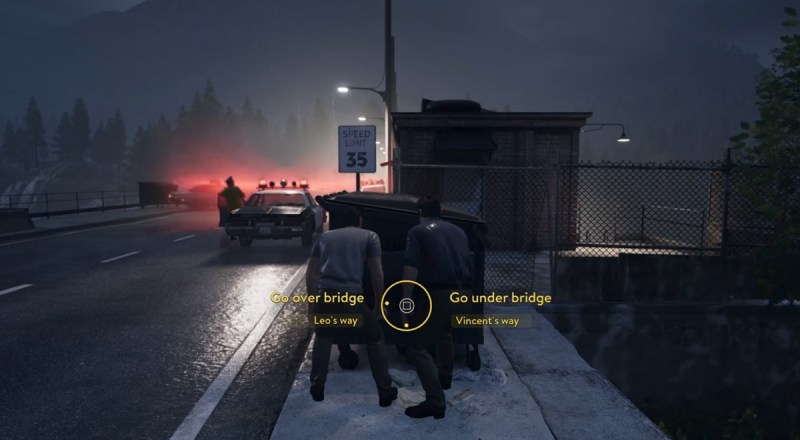 Above: Leo and Vincent face a big decision in their escape in A Way Out.

Sometimes the biggest choice you have in a game is whether to use a machine gun or a sniper rifle. Leo sees problems this way, and you have to restrain him from using violence to get what he wants. That’s because Vincent can see past the quick fix and assess the consequences of being too brash.

When we finally got on some weapons, the guns felt odd in our hands. They weren’t that easy to shoot, and I could tell I wasn’t playing a precise shooting game like Battlefield or Call of Duty. Not only is it smarter to avoid combat. It’s also clear that combat doesn’t always pay off because it is hard. The enemies aren’t particularly smart, but if you can avoid getting into a direct firefight, you should.

There’s one point where Leo and Vincent get in an elevator. A security guard comes close to recognizing them. Leo is ready to pounce on the guy, but Vincent pretends to have a contagious disease. The guard freaks out and gets out of the elevator as fast as he can. It was Vincent’s elegant way of avoiding a fight and staying under the radar as an escaped convict.

I marveled at one scene in a hospital lobby, where our job was to find out some information from the nurses. But the escaped convicts were in the news, and we saw a newspaper sitting on the counter of the nurse’s desk. As one character I had to choose to move the newspaper into the garbage can. I was thoughtful that way. But something different happens when the other character does it. He moves the newspaper aside and folds it, but doesn’t throw it away. It’s possible, then, for the nurses to notice the faces later on, identify them, and put the heat on them.

These little nuances will make you want to go back and replay the game from a different point of view. In fact, you won’t feel like you’ve finished until you have finished playing both Leo and Vincent. 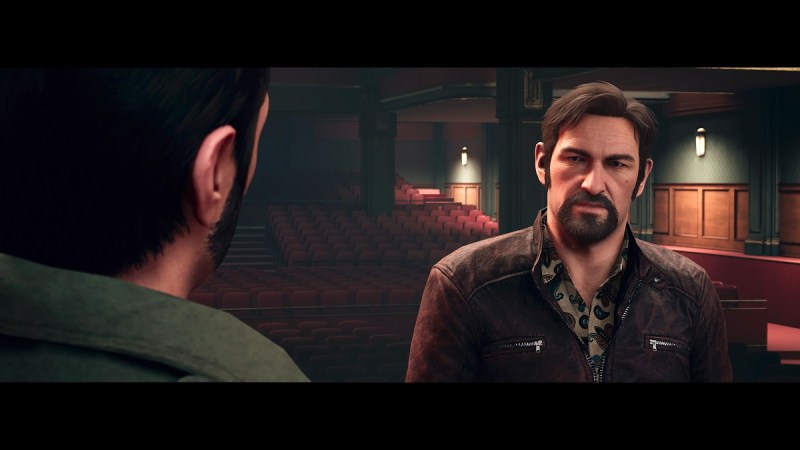 Most of the time, it turned out that being impetuous was dumb and being rational was smart. That may not come as a surprise. But for the most part, Gary and I didn’t agonize over our decisions when we had a choice about pursuing Vincent’s recommended path or Leo’s.

These choices were too easy. We could go on Vincent’s path underneath a bridge and have to deal with Leo’s fear of heights above the raging waters. Or we could take Leo’s way on the surface of the bridge. That required us to knock out a guard, steal his squad car, drive it past the road blocks, and escape past cops who were bound to look in the windows of the police vehicle.

Leo’s way was just too risky. We found that going Vincent’s way was mostly the best choice, and that seemed to rob us of the illusion of choice that the developers worked hard to create.

We encounter occasional bugs. One of the most annoying was when Vincent was hanging by a thread over a steep waterfall. Leo comes to his rescue, but Vincent appears to be hanging in thin air. Vincent tries to maneuver sideways so Leo can help him more easily, but Vincent gets stuck along the way for along moment. I hope the fix this with a patch. 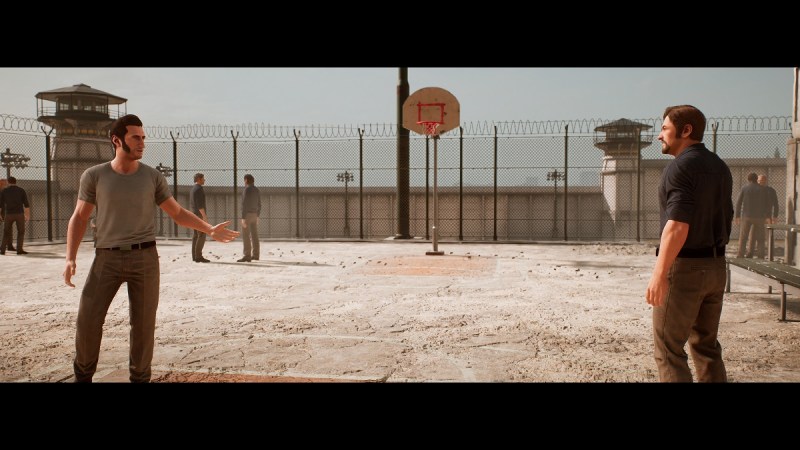 Above: Leo (left) and Vincent are very different personalities in A Way Out.

Sometimes it’s easy to get stuck and waste some time in the game. There’s a part where you have to dump some sheets in a bin. If you don’t dump enough sheets into the bin, you run the risk of being discovered. This trips you up, and you have to do that scene over, for no real good reason.

We had a few places where we had trouble figuring out a simple part of the puzzle, like getting lost in a sewer or figuring out how to break out of a cell. Of course, this is normal in games. But getting stuck in the middle of an urgent story always makes you feel like you’re holding up the show. 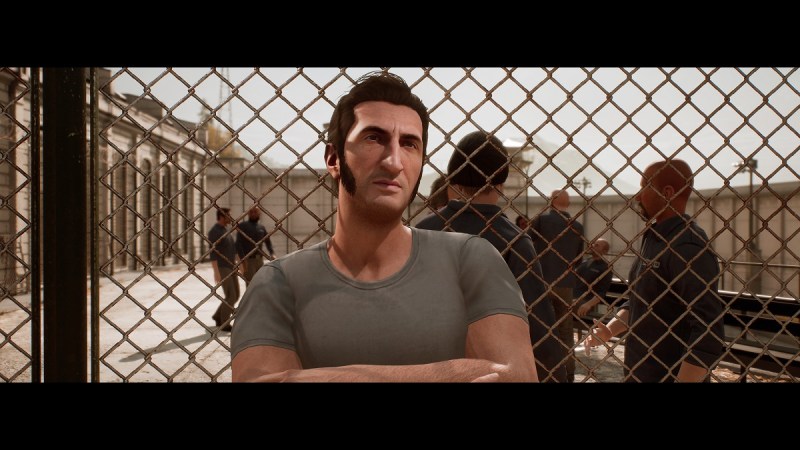 Above: Leo is bold and brash in A Way Out.

Fares promised that we wouldn’t be doing the same things over and over again. With the exception of a few too many boosts, he was right. The gameplay has a lot of variety. You don’t get bored, and sometimes you get surprised. The game’s ending is quite good, and we won’t spoil it here.

You may feel split between the lack of complete agency and the recognition that you are being told a story.

It’s not a long game. On the other hand, it only costs $30, and you can play it with a friend using a Friend Pass, which allows both of you to play it online with only one purchase of the game. That’s quite a bargain, and one that Fares himself argued for.

The game and story have a couple of execution flaws, but A Way Out tells a good story, and much of the vibe about the themes of trust, brotherhood, revenge, and loss are conveyed through gameplay in a novel way. That’s reflects a good understanding about the cutting edge of interactive achievement.

A Way Out launches on March 23 on the PlayStation 4, Xbox One, and PC. The publisher sent us a PS4 digital code for the purposes of this review.