In what’s beginning to become a tradition, Ubisoft is using the Game Developers Conference in San Francisco to announce more studios are joining its sizable crop of global offices. Today, the French game publisher unveils Ubisoft Mumbai and Ubisoft Odesa.

Mumbai is Ubisoft’s second outpost in India — it opened its Pune studio 10 years ago in 2008. Odesa is the publisher’s second outpost in Ukraine — Kiev opened in 2008 — and they join the studios in Bucharest and Sofia to form a new Eastern European development hub.

Ubisoft’s global network of studios help it in creating and maintaining its successful — and growing — live operations games such as Rainbow Six: Siege, The Division, and Ghost Recon: Wildlands.

Mumbai will fall under the umbrella of Jean-Philippe Pieuchot, the managing director for Ubisoft Pune in India. The publisher will also continue its long tradition of partnering with local educational institutions, as it noted when launching Ubisoft Philippines in 2016. In this case, Ubisoft will work with the Indian Institute of Technology Mumbai & Intuit Lab, one of India’s foremost universities. Mumbai opens in June.

Odesa falls under Adrian Serbanescu’s purview. He’s the studio manager at Kiev, and Odesa has already started operations with a small crew. It does not have university partner at this time, Ubisoft said.

“We don’t have anything to share with regards to partnerships, but we’re always on a lookout for young talent and to see how we can contribute to foster talent in the region whether it is by partnering with schools or in any other ways,” the publisher said via email.

Ubisoft first came to India 10 years ago, and Pune has become critical in the development of games such as Just Dance, Rayman, Steep, and South Park. “This year we celebrate our tenth year in India. We have 10 teams in console development, mobile development, and QC. Thanks to hard work and passionate people, we have one of the most talented teams in India today,” Pieuchot said. “We’re very proud of this.” 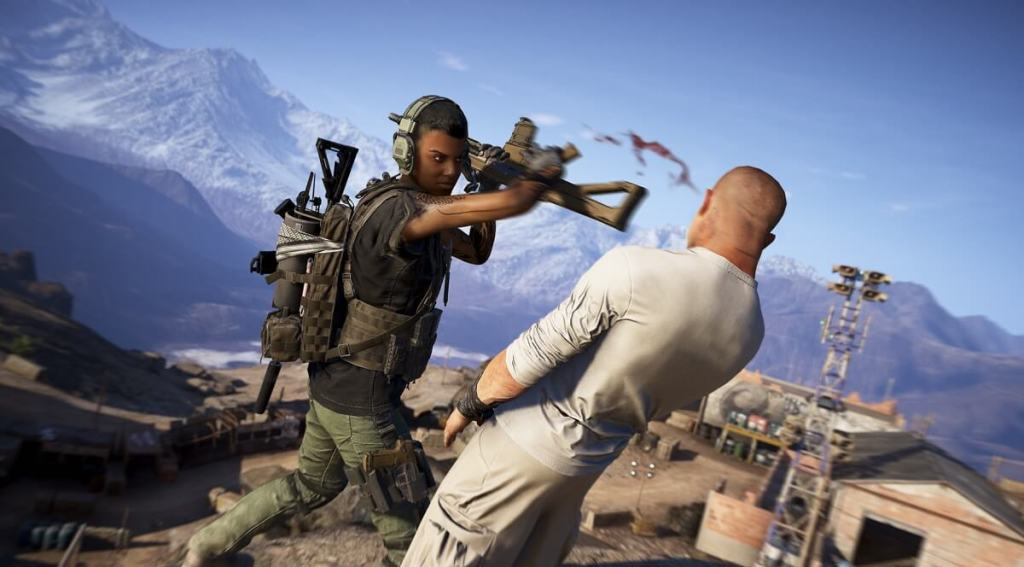 Above: Ghost Recon is one of the series that Odesa will work on.

In a presentation on Monday to the press, Pieuchot laid out the logic of expanding in India — especially Mumbai, one of the five largest cities in all the world. The studio will call the Powuai neighborhood home. Mumbai the hub for Bollywood, India’s film industry, and it’s one of the nation’s top cities for the tech industry. He said it’s an hour-and-a-half-to-two hours away from Ubisoft Pune.

“It’s unique,” Pieuchot said. “[Mumbai]’s an amazing mix of many cities, of cultures and trends. It’s a very creative crowd. For us it’s something very unique, which we believe our team will benefit from in terms of inspiration and new opportunities.”

The goal is to hire 100 people in the next two years.

A slide of the Ubisoft Mumbai team showed five leadership positions, all men. GamesBeat asked why the slide didn’t have any women.

“You know Ubisoft is open to any people, globally speaking. We hope to hire a good mix of people, women and men, of course,”Pieuchot said. “Progressively, we’ll have a bigger headcount of women in our studio, and we’ll continue to add them. We need years of experience before taking the leadership in such initiatives, so we hope to add more women sooner. We’d definitely like that to be happening in the future.”

Ubisoft senior director of global communication Michael Burk said, “That’s the leadership that exists today. We want to be genuine in what we represent. That doesn’t mean we don’t have ambitions to improve the diversity within the studio or improve diversity within other studios globally. We also don’t want to airbrush reality.”

And Ubisoft does have women in leadership roles at Mumbai, officers who also work at Pune: Harsha Sershiya is the head of finance, Harsha Malkan is head of Operations and Samira Chabani is the head of HR for Ubisoft Pune. In an email to GamesBeat, Burk added, “The initial team members in Mumbai volunteered to move there to help start the studio. As the studio grows, it will keep Ubisoft’s commitment to being an equal opportunity employer while increasing the diversity of our teams around the world.”

Odesa will also work on the Trials series with Kiev in addition to being one of seven studios working on the Ghost Recon franchise. Ubisoft’s goal is to staff 60 people there.

“Ubisoft Kiev, our first studio in Ukraine, opened in 2008, about 10 years ago. It has matured and grown both in size and experience along with the game development market in Ukraine,” Burk said. “When you look at Ukraine now, particularly Odesa, there’s a lot of IT experience, a lot of IT education that takes place there. We felt it was the right time now to expand our presence in Ukraine and within Eastern Europe.”

Odesa on the Black Sea and is a couple of hundred miles away from the Crimea, which Russia seized from Ukraine in 2014. GamesBeat asked if such acts were a cause of trepidation for Ubisoft.

“It’s something that the teams definitely look at. The team in Kiev, it’s well aware of the situation,” Burk said. “They have contingency plans. They have HR plans that are related to any of the recent developments. But for the most part, they’re focused on making games and working with us in the studios. They’re aware, the HR teams and the studios, but for the most part it doesn’t affect, or hasn’t affected, the development of the studio, and it hasn’t affected our plans for growth in the region.

Ubisoft now has 36 studios in North America, Europe, and Asia. Will South America follow in 2019?