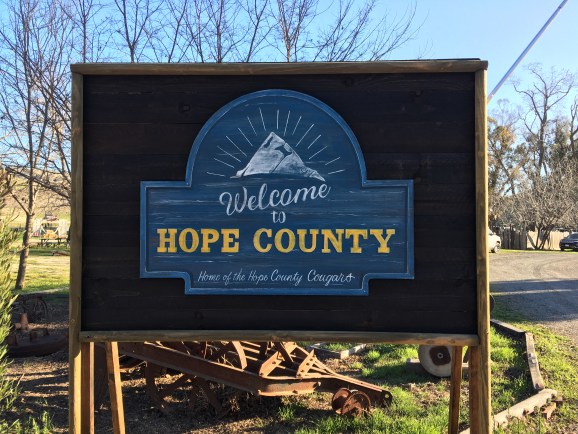 If you’ve ever had a faux Christmas tree, then you know that they are exactly like video games. OK — maybe that needs an explanation.

With a fake Christmas tree, you have to get into each branch and fluff out the individual limbs to fill in the gaps to make the “tree” look full, lush, and alive. The same is true for open-world games like Ubisoft’s Far Cry series. When a company like Ubisoft makes a Far Cry, it has to get into the various gameplay limbs to fluff them out to fill in the gaps. The goal, like with the tree, is to make games feel full and living.

And when it comes to Far Cry 5, Ubisoft has made its most lifelike faux living world so far. The publisher accomplished this by creating a scattershot approach to gameplay experiences that are all fun and valid. At the same time, the company used a similar scattershot strategy for its storytelling, and that did not work as well.

Far Cry 5 is an open-world shooter in which players take on a religious death cult in the mountain regions of Montana. You play the unnamed “deputy” hero of Hope County who must lead the people in a fight against the violent Project at Eden’s Gate (think the Branch Davidians of the Waco incident). Joseph Seed, who is known as “The Father” by the PEGies, is a prophetic figure who fits Ubisoft’s Far Cry-villain mold of an aggressive madman who wants you to suffer.

It’s the most well-realized Ubisoft open world yet

Until some startup simulates the entirety of life, games will always have gaps. What I mean by “gaps” is that, due to budget and time constraints, developers will focus their design efforts on a finite number of siloed gameplay experiences.

Over here you have the combat, you can use vehicles, and maybe you have some minigames. Even within these distinct gameplay areas, you have gaps. Again, time and money may force some developers to remix repetitive elements to create multiple missions to fill out a game. But that grows old quick because you feel like you have explored an entire branch of a game after finishing only a couple of missions.

The shooter has an astounding variety of activities that players can partake at any time. You can take on story missions; you can fly in stunt races; you can go fly-fishing; or you can go track down hidden stashes of weapons and other items. But the game is special because Ubisoft spent the time to fluff out these gameplay branches.

The “Prepper Stash” is a great example of this. Far Cry 5 has hidden stores of weapons and other useful items hidden all over the map because every other person in Montana is a prepper just waiting for economic collapse. Ubisoft probably could have gotten away with just giving players a hint about the location and then having players go track those spots down. What it actually did, though, is create unique locations with bespoke puzzles that make each one of these treasure troves exciting to find and engaged with.

I stumbled across one prepper stash while on another mission at the same farm. As I figured out the platforming and combat puzzle (bees don’t like fire) to get to the ammo and upgrade points, I found myself on top of a house with a zipline that would take me right to a semi-truck called The Widowmaker that I was supposed to steal back from the cultists.

That was fun and interesting for both of those missions, but it was also distinct from the the prepper stash at the boat house or the one that requires you to shoot a sniper rifle through a window or the one that is a haunted house set up by what is obviously a serial killer/clown.

That branching variety digs into combat as well. In one mission, you are supposed to take out three convoys of trucks. You can do this however you want, so for the first I set up remote explosions in the road. For the second convoy, I shot the driver and then shot the trucks until they exploded. For the final convoy, I mixed it up again and got into a plane and used its cluster bombs to take it out.

This has filled in the gaps of Far Cry for me, and it means that I’m always having fun.

Some delightful characterization and environmental storytelling

Far Cry 5 has a tone problem, but it’s not ever present. Often, you’ll find yourself in moments or places that have a lot to say about the fictional world of Hope County and Far Cry 5 itself.

One of these moments is the haunted house. In this prepper location, you power up the “house of terrors,” and go inside. This prepper set up their home to work just like a cheesy Halloween haunted house. You get jump scares and violent scenes with animatronic actors … except they aren’t puppets. They look exactly like the people you’ve been fighting against and saving the whole game.

As I worked my way through that space, the reality of what I was seeing started to dawn on me: I’m in a serial killer’s house.

Far Cry 5 has quite a few of these moments, and I adore them even if Ubisoft drowned them under overdramatic “crazy” bad guy stuff and comedic absurdity.

Overall, Far Cry 5’s writing doesn’t work for me. You will go through some vicious whiplash in this narrative.

In one mission, you are trying to kill bulls right as they are about to have sex so a chef can cook them up for a testical-eating festival. Throughout your ball quest, “Sexual Healing” by Marvin Gaye is playing on the soundtrack, and the game demands that you kill one of the bulls by chewing them up in a mulcher on the front of a tractor.

In the next mission, you could find yourself listening to a manipulative villain talking about torturing people.

What’s frustrating is that both of these tones are well executed on their own, but this is where Ubisoft’s attempts to fill in the gaps has failed. I can’t disassociate parts of this game from the other, and when I’m thinking about the “Testy Festy” as a man tattoos the sins of my character onto her body, I don’t know what to feel. Am I supposed to take this drama seriously? Because maybe a joke is coming at any moment … and then it doesn’t.

And Ubisoft does have missions with a balance that works and acknowledges both extremes without pretending the other doesn’t exist.

As you are coming off of an exhausting and intense boss fight against one of Joseph Seed’s family members, the game decides to give you a break. A pregnant woman you met earlier goes into labor, and she calls you to help her get to a medical professional. You show up at the same time as her husband, and he has you drive his truck. During this scene, you have the natural drama of a human giving birth, but Ubisoft uses this to punctuate how absurd the Far Cry world is.

During your drive to the clinic, gun fights break out in the road around you, a plane crashes in front of your vehicle, and you have no choice but to take a ramp off of a bridge. While all of this is happening, the pregnant woman is screaming things like, “what is all of this?!” and “none of this makes any sense!”

This is a great moment. It plays the frightening conceit of bringing a child into a place run by a cult against the over-the-top antics of the Far Cry games in an effort to act as comedic relief. But this is an exception. For the most part, Far Cry want to go from threatening and scary to silly and frivolous whenever it wants, and that hurts it.

Far Cry 5 is mechanically sound and varied. You’ll find something that entertains you, and Ubisoft has nailed all of the underlying elements of character and world progression. At the same time, it squanders some decent writing because it can’t decide what kind of game it is.

Far Cry 5 is available March 27 for $60 on PC, Xbox One, and PlayStation 4. Ubisoft provided GamesBeat with a download code for the purpose of this review.