International mobile network trade organization GSMA forecasts that the United States will be a “pioneer market” for 5G wireless technology, thanks to both an early start in commercializing 5G and solid projected growth through 2025. According to a comprehensive new GSMA report published today, the U.S. will have 100 million 5G connections by 2023 and 190 million by 2025 — enough to continuously lead the world in percentage of 5G connections.

One of the key reasons GSMA projects strong U.S. 5G adoption is its huge base of early adopters: 58 percent of the total smartphone user base, a solid majority constituting just the initial addressable market for 5G services. Europe is close behind the U.S. with 46 percent as early adopters, while the combined Middle East and North Africa region is third with 34 percent early adopters. By contrast, less than 15 percent of customers in Latin America, Sub-Saharan Africa, and South Asia are early adopters, making 5G more challenging to bring to those markets.

Not surprisingly, GSMA predicts that high-resolution video, AR, and VR will be some of the earliest drivers of 5G demand. The organization notes that Apple is already selling the Apple TV 4K with HDR support, demanding extra data bandwidth, while partner Foxconn is working on “8K + 5G” displays designed to display 8K video using 5G wireless connections. Similarly, Facebook, Google, Microsoft, Apple, and all four major carriers are all working on either VR or AR projects, and each new visual technology is expected to benefit from 5G’s high speeds and low latency.

U.S. revenues from 5G are expected to come substantially from enterprise customers, with consumers, online apps, and government as smaller drivers. GSMA predicts that 4G connections will continue to be viable through 2025, at which point 5G connections will overtake 4G for the first time. However, legacy 2G, 3G, and 4G services will all show noticeable declines in popularity starting in 2019. 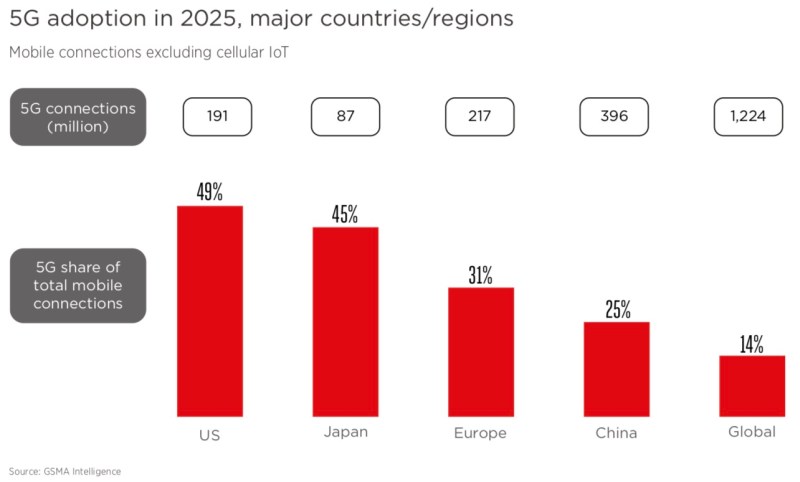 One 5G application is presented as something of a question mark: fixed 5G, the offering Verizon will focus on in 2018 as it deploys 5G wireless as an alternative to cable broadband. The report discusses fixed 5G as a way for current broadband providers to enter the wireless market and vice versa, but it doesn’t include any fixed 5G services in its projected 190 million connections. Similarly, the projections don’t include cellular Internet of Things connections, though they are expected to become extremely important for 5G over time.

The other big question mark is pricing. GSMA doesn’t get heavily into service pricing, but says that the first 5G smartphones will likely “cost more than the most advanced 4G devices currently available” because they will include “enhanced features”: 4K or 8K displays, additional AR/VR-ready cameras and sensors, and new wireless chipsets. Realistically, 5-inch smartphones won’t be able to benefit from even 4K displays, let alone 8K, and it’s hard to imagine that early 5G phone makers will want to load their devices up with anything that makes them unaffordable. Only time will tell whether any or all of the predictions prove correct.