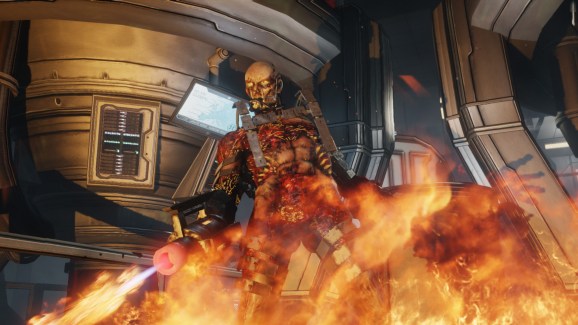 Don't let the Husk corner you in any hallways.

Tripwire Interactive has maintained excitement for its cooperative Killing Floor 2 shooter through regular updates, and that is continuing with the Infinite Onslaught patch that is due out before the end of the month. This new content features a much requested endless mode and more, and it will hit PC, Xbox One, and PlayStation 4 all at the same time.

“We’re really excited to bring this one to the fans,” Killing Floor 2 boss Bill Munk told GamesBeat. “Our community has been asking for an endless mode for quite some time and now we’ve finally got one.”

Killing Floor 2 has players taking on waves of zombie-like creatures. That has previously had a level structure where squads were always working toward an culminating final encounter. With endless mode, teams will now keep going until they are defeated.

Infinite Onslaught features other tweaks and improvements. The endless mode includes new commentary, and Tripwire is bringing back a fan-favorite gun.

Tripwire is also bringing back a character from Killing Floor. Once Infinite Onslaught drops, players can select Domestic Assistant Robot to fight off the mutated undead.

“On top of all of that, we also have several new maps, achievements, and loads of other goodies,” said Munk. “The free Killing Floor 2 Infinite Onslaught Content Update will be coming later this month, but PC players can opt-in to the update’s beta right now on Steam for an advanced preview look at all of this new and upcoming content.”