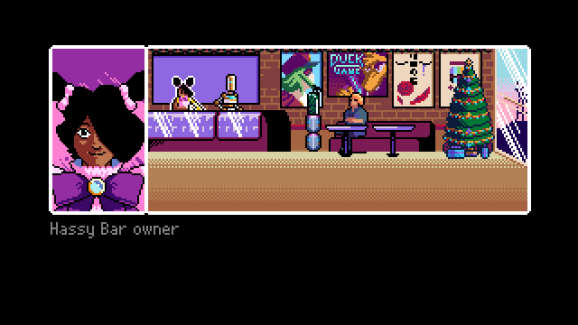 GaymerX Foundation‘s Matt Conn has stepped down from his role as CEO of the nonprofit that runs a series of LGBTQIA (lesbian, gay, bi, transgender, queer, intersex, and asexual) game events. He is also leaving the indie studio he founded, MidBoss, after a series of allegations have emerged online about his misconduct. Cofounder and president Toni Rocca will be running the company for the foreseeable future.

MidBoss is best known for developing the narrative adventure game 2064: Read Only Memories, which was praised by critics and players for being queer-inclusive. Allegations began trickling in a few days ago that the studio had underpaid people and that Conn had verbally abused and sexually harassed employees. A number of former MidBoss team members have sounded off on the social media platform Twitter about their experiences while working at the studio.

It is deeply hard for me to talk about this, but

I have heard some of these allegations first and second hand. I am a former MidBoss employee. I earned less than minimum wage. I wrote it off as okay, but in light of these allegations, I can’t justify their behavior anymore. https://t.co/jHULXSiz8X

overnight, i've received two more accusations of sexual harassment by midboss's matt conn. when i made this first tweet, i had known his behavior was bad and had hurt multiple people, but even i didn't know how bad or widespread it had gotten.

Former MidBoss employee Tyler Gausvik said in a tweet that they faced “sexual harassment/misbehavior, emotional manipulation, and other really toxic behavior” at the studio.  They also said they received threats of litigation when they criticized their work environment and “less than minimum wage for full-time work.” After they spoke out about these criticisms, they said Conn messaged them on Facebook and said lawyers would have to get involved. Gausvik also said that Conn told them that they would “develop a negative reputation” for speaking up about these issues.

“Nothing I was saying was untrue, however I wasn’t going to keep talking if there was even a chance of legal action because I didn’t have that kind of money,” said Gausvik to GamesBeat.

Gausvik worked at MidBoss for eight months in 2015 in quality assurance and as part of the community management, marketing, and team management teams. They said they worked closely with Conn, whom they point to as the source of most of the toxic behavior at the studio. According to Gausvik, employees at the studio didn’t have access to a human resources department and they “just had to cope with anything that was weird or not right.”

“Matt wasn’t the only one perpetuating these kinds of behavior, but I don’t feel comfortable naming the other person at this time because I do not know anything about their ongoing activities, but Matt was definitely the source, like I’d assume the other person only did it because it was seen as acceptable,” said Gausvik.

Software engineer Christopher Lindgren said that he worked closely with Conn from late 2017 to early 2018. In a series of tweets, he talked about how MidBoss avoided drafting paperwork which may have contributed to employees being under-compensated for their work.

“I did not receive the brunt of Matt’s abusive behaviors, and I have a couple of theories as to why he gave me preferential treatment over everyone else — where ‘preferential’ can probably be viewed as ‘baseline’ in most other work environments,” said Lindgren in an email to GamesBeat. “I probably knew more about what to expect from working in a small indie studio given my attendance to the meetings at my university’s [International Game Developers Association] chapter as well as my classes in project management and software engineering, and I think Matt could tell I wasn’t as easily hustled because I’d know right away if something obviously was wrong.”

Though Lindgren didn’t personally experience the alleged abusive behavior, he said that he saw coworkers who were underpaid and heard stories about sexual harassment. Like Gausvik, he said that he was unaware of any HR department or official channel where employees could report inappropriate behavior.

“One of my coworkers was making the same amount as I was and was putting in double or triple — depending on the circumstances, usually the latter — amount of time,” said Lindgren. “I could see how much it was hurting them, but I wasn’t sure what to do. I don’t want to discuss exact details of sexual harassment, but I have been given firsthand accounts of Matt either pressuring them for sex or revealing himself without warning.”

GamesBeat has reached out to Conn and other former MidBoss employees. We will update this article as we get more information about the allegations.

Update at 2:22 p.m. Pacific: In a phone call with GamesBeat, Conn said that MidBoss is now looking into overhauling its payroll and moving freelancers to salaried positions. The studio is also going to add a human resources department. This will all happen under Rocca’s leadership, as Conn is stepping away from both MidBoss and GaymerX.

Conn said that he brought on most of his employees previously via “handshake deals” rather than contracts. He said that MidBoss was “too ambitious” and had “scaled inappropriately,” referring to things like not hiring an HR representative.

“Even if what I was doing was legal in terms of the technicality of it, if we’re going to be involved in GaymerX, if our ethos is going to be making sure queer people can make it in this industry, I wrongly thought that it was more important for me to try to give as many people a chance as possible by paying them only scraps,” said Conn. “I thought that — at the time when I hired a lot of these people, they said they needed help, that that amount of money would be helpful to them, and I think that looking back at it, it’s wrong. I wanted to bring people into the industry but at the same time, I wasn’t going about it in a way that was an appropriate way to make sure they were being compensated fairly. I just was treating it very juvenilely.”

He said that some of the problems emerged because of the way MidBoss and GaymerX were run together as one company, even though one was for-profit and the latter was non-profit. The two are now separate entities.

Regarding the sexual harassment allegations, Conn did not directly admit to any wrongdoing. He described himself as “unprofessional, weird” and said he needed to “learn how to be professional” and that he was “sloppy about the way [he] communicated.”

As next steps, Conn said he plans on going to therapy to address work and personal issues.