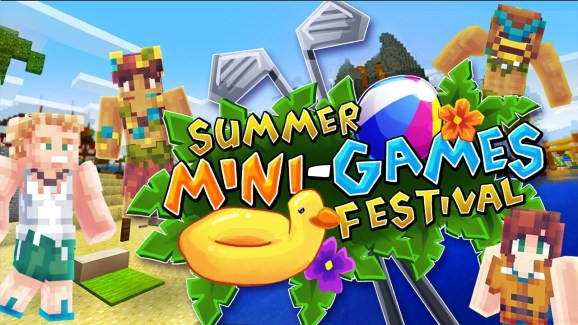 Noxcrew's Summer Mini-Games Festival is a hit on the Minecraft Marketplace.

Minecraft’s Marketplace is growing fast enough that it has enabled several creators to focus on the platform as their full-time work. The Noxcrew team, which makes popular Marketplace content like Summer Mini-Games Festival, has taken that even further by employing the equivalent of an entire development studio.

Noxcrew chief executive officer Stefan “Noxite” Panic and co-owner Joe “Avondale” Arsenault both told GamesBeat that working on products for the Minecraft Marketplace is their day job. But the team is way bigger than the two of them.

That’s bigger than a lot of indie studios that are making their own games, and the Noxcrew team thinks that is one of the key reasons their content stands out on the Minecraft Marketplace.

“We produce all our own music, textures, art, sound effects, and voice acting in-house,” said Aresnault. “And for the longest time, we were the only team who could say that.”

The Noxcrew leaders also think that they have found an audience by always trying to build something unexpected. Minecraft is a game about building things, and Microsoft has opened up its tools to enable anyone to begin modding assets. In that world, Marketplace content needs to surprise people while also maintaining a high level of quality.

At the same time, Panic and Arsenault don’t think that this space is closed off to new creators. They both expect a new generation of Minecraft community members to rise up and make their way into the Marketplace.

“I don’t think there’s ever been a better time to get into Minecraft content creation,” said Arsenault. “The technology for the Bedrock Engine is still very new, and the community making content for it is very active and helpful, especially with new creators.”

“Noxcrew itself made it onto the Marketplace by ‘just starting to make stuff’ a long time ago,” he said. “I believe in the longevity of the Marketplace and as long as you know how to make your content look good to the public after it’s made, I don’t think it’s ever too late!”