Epic Games’ Fortnite: Battle Royale might not have chicken dinners, but players are finding it tasty. It’s been duking it out with PUBG Corp.’s PlayerUnknown’s Battlegrounds for the No. 1 spot for the last couple of months, and market analyst Newzoo has some new numbers about the standings. Fortnite has claimed the top honors as the most-played battle royale game as of February, but PUBG is beating out its colorful rival in China as the top Western PC title.

Newzoo reports that 30.1 percent of core PC gamers played battle royale games last month, and it predicts that the genre will only grow beyond existing titles like Fortnite, PUBG, Daybreak Game company’s H1Z1, and Studio Wildcard’s Ark: Survival of the Fittest. However, developers will likely opt to incorporate a battle royale mode rather than create an entirely new title in the genre.

As for the two top guns in the last-player-standing space, their popularity is uncontested at the moment. Fortnite was the No. 1 battle royale game in a lot of respects last month. It got the most views on Twitch and YouTube Gaming capturing 17.9 percent of total viewership hours where PUBG caught the attention of 11.8 percent. This was likely thanks in part to the bump it got when musician Drake and top broadcaster Tyler “Ninja” Blevins teamed up for a match. And Fortnite was the most played battle royale game on PC in the world. 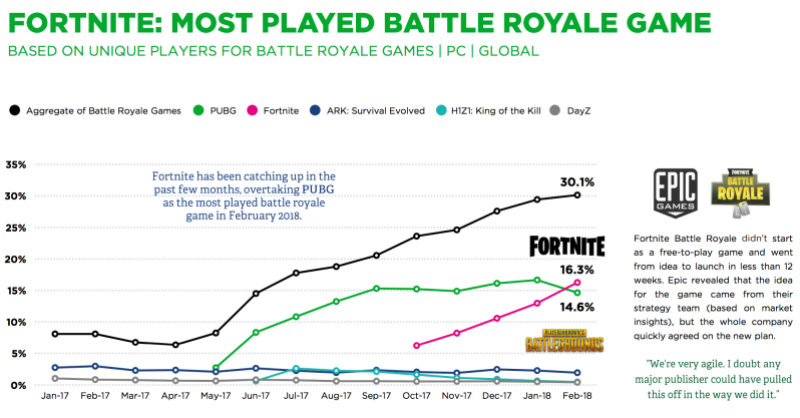 Though the numbers seem to favor Fortnite at the moment, PUBG is booming in Asia. Fifty-two percent of core PC gamers play it in China, compared to the paltry 1 percent that play Fortnite. In August, it overtook Riot Games’ League of Legends as most popular Western PC game in China.

Asia is a region that’s friendly to mobile esports, and the battle royale genre is flourishing on mobile as well. NetEase’s Knives Out has over 50 million monthly active users and its Rules of Survival (also known as Terminator 2 in China) has over 35 million MAUs. Tencent has joined the fray by partnering with PUBG Corp. It developed and published PUBG: Exciting Battlefield and PUBG: Full Ahead in February, and both shot to No. 1 and No. 2 respectively on the mobile charts immediately. Exciting Battlefield had 7.3 million downloads and Full Ahead had 2.9 million on Chinese iOS devices in their debut month.

Epic is chasing mobile players as well. An iOS version of Fortnite launched an invite-only beta starting on March 15 and became the most-downloaded game in the Apple App Store in the U.S. Shortly after, PUBG Corp. and Tencent released PUBG Mobile globally on iOS and Android devices. As of March 24, Newzoo reports that PUBG Mobile has 22.3 million downloads and more than 4.5 million daily active users. In comparison, Fortnite has about 6.5 million downloads and over 1 million DAUs, but it has room to catch up once it expands to Android and exits beta.

All these numbers point to the fact that, though PUBG’s initial success may have been an astounding viral sensation, the battle royale genre is here to stay.