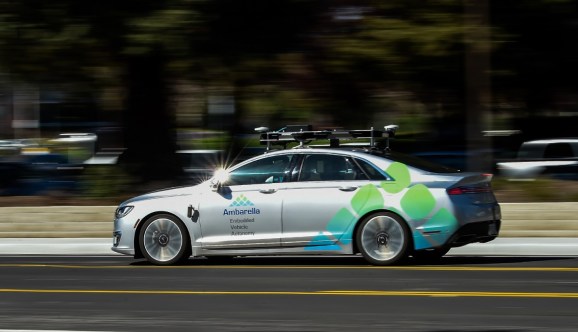 Ambarella shows off its chips for self-driving cars in a test vehicle.

Ambarella has unveiled some new vision processing chips that are being used in self-driving cars, and today the company is taking the wraps off one of those cars.

The new test car shows off tech from Santa Clara, California-based Ambarella, which revealed its CV1 and CV22 families of chips at CES 2018, the big tech trade show in Las Vegas in January. The company has been trying out the autonomous vehicle on roads in Silicon Valley, said Chris Day, vice president of marketing and business development at Ambarella, in an interview with VentureBeat.

The chips are a big change for Ambarella, which has survived by doing things that other larger chip companies can’t, such as high-end, extremely power-efficient image processing. As the commodity rivals catch up, Ambarella moves on to tougher problems, which is why it shifted to vision processing, a key component of artificial intelligence processing for self-driving cars.

The Ambarella chips are based on the CVflow architecture that is optimized for computer vision algorithms such as stereo processing and deep neural networks. In contrast to digital signal processors (DSPs) or graphics processing units (GPUs), the CVflow designs can scale up to much higher performance levels per core, or processing brain. The vehicle has high-resolution stereo vision cameras that deliver a 360-degree view of the area around a car.

The CV1 chip can do computer vision processing up to 4K resolution or 8-megapixel resolution, said Day in an interview in January. That allows it to provide image recognition at much greater distances, and the architecture is programmable based on standard industry training tools such as TensorFlow. It can handle low-light processing and high-dynamic range processing, which means it can capture nuances of lighting and shadows in high-contrast scenes.

Rivals include Qualcomm, Nvidia, and Intel. Ambarella wants to provide much more cost-effective and power-efficient designs than rivals have offered, and its CV2 computer vision processor is coming soon with 20 times the performance of the CV1.