Google has announced that its Surveys market research product can now be used to target consumers in nearly 60 markets.

Prior to now, Google Surveys has been available to researchers in any country; however, their available subject pool was limited to just 12 markets: Australia, Brazil, Canada, France, Germany, Italy, Japan, Mexico, Netherlands, Spain, the U.K., and the U.S.

Moving forward, the list of target markets has been expanded by an extra 46, with most of Europe now included, in addition to India, Indonesia, Argentina, Russia, South Korea, and Pakistan. A handful of African countries have also now been added, including South Africa, Ghana, Kenya, and Algeria.

Google gets into surveys

Google Surveys launched originally back in 2012 as Google Consumer Surveys, but it dropped the “consumer” part of the brand in 2016 when it was split into two distinct products: the pay-as-you Google Surveys and the enterprise-focused Google Surveys 360.

The latter of those products is still only available to companies in the U.S. and Canada, though their target audience can be in any one of the 58 markets that Google Surveys can be targeted at. 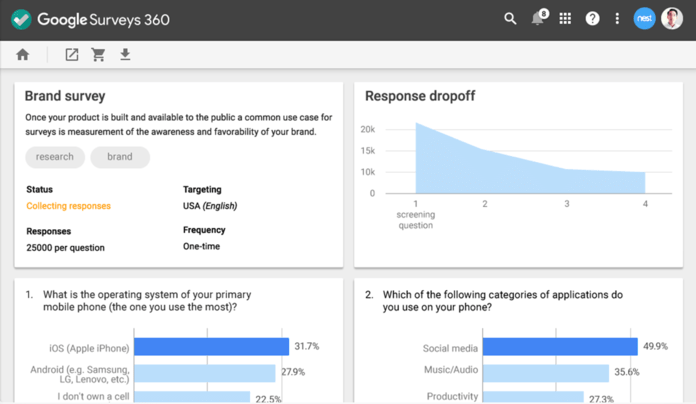 Alternatively, consumers can download the Google Opinion Rewards mobile app, which issues Google Play Store credit for those who participate in quick surveys.

Today marks a notable expansion for the Google Surveys product, as it serves as an easy inroad for marketers to carry out research in many emerging and developed markets around the world. Market research is a $46 billion global industry, and the internet and connected devices have played an increasingly prominent role in how research is conducted — surveys can be distributed through email, SMS, messaging apps, and websites, among other online channels. This makes it much easier to achieve scale than offline methods involving clipboards.

Earlier this month, London-based Streetbees raised $12 million to grow its AI-infused market research app that pays participants for their insights, and it’s setting out to solve a similar problem: connecting market researchers with disparate groups around the world through their connected devices.