The tech, game, and virtual reality industries have a lot of hopes tied to Steven Spielberg’s Ready Player One film, which debuts on March 29 throughout the United States. I caught a premier at the Dolby Theater in San Francisco as part of promotion for Roblox, a virtual world company which has its own sort of James Halliday father figure and creator in Dave Baszucki, the cofounder of Roblox and its virtual world. I enjoyed myself, and so will anyone who gets a kick out of hunting down pop culture allusions.

Virtual reality plays a central role in Ready Player One. The book inspired many people in VR to pursue their own dreams, raising billions of dollars and creating a whole entertainment ecosystem. The movie could play a similar role in popularizing VR among consumers, who may enjoy the movie and take an interest in VR. Or so that is what some companies in the VR industry hope. HTC, for instance, has created a number of Ready Player One VR experiences to accompany the movie. I don’t think any single industry can count on a film to lift it into the public’s consciousness. Those industries have to do it themselves with compelling products.

(Craig Donato, chief business officer at Roblox, will speak on the “leisure economy” at our GamesBeat Summit 2018 event).

In Ready Player One, Halliday creates an enormously popular online world dubbed the OASIS. He dies from an illness, and he sets the world on a contest, requiring hunters (known as Gunters, short for Egg Hunters) to find three keys and solve puzzles in order to inherit the world, which is valued at half a trillion dollars. That pits lone Gunters like Parzival and Art3mis against the evil corporation, IOI (Innovative Online Industries), and its minions known as the Sixers. Parzival and his friends start a romp through the 1980s, unearthing Halliday’s memories in order to decipher the puzzling clues he left behind. It culminates in a gigantic clash of video game and pop culture avatars.

I’ve read the book twice and count myself as a fan. So is my 18-year-old daughter, who went with me. She didn’t get all of the references to 1980s pop culture, so I filled her in on a few things. (That darn familiar Tolkien-like incantation quote still eludes me. Update: It’s from Merlin character in Excalibur per @trilobyte). It’s filled with so many references that it’s impossible to count, and many of them are quite different from the book. If you’re looking for a replica of the events of the book, then Spielberg has ruined this movie for you. On the other hand, the licensing lawyers have probably had a gargantuan battle over securing rights to properties used in the film, and that may explain why the film is so different.

The book had some memorable scenes with video games such as Joust, Zork, Pac-Man, Tempest, Black Tiger, and Adventure. And the book had lots of references to Blade Runner, Monty Python and the Holy Grail, and War Games. From music, Rush’s 2112 album played a big role. That was half the fun of the book for me, as I grew up during the 1970s and 1980s, and I knew so many of those references.

But the movie dispenses with many of the quests in the book, changing them so that one becomes a road race with the Wade Watts, the hero of the story, driving a DeLorean car from Back to the Future. I missed the presence of Ultraman, another figure from my childhood, but the rights for that property were in dispute and unavailable to Spielberg. The film also doesn’t have any of the book’s signature games, with the exception of Adventure, a game on the Atari 2600 which had the first Easter egg, or a hidden message embedded inside the game. Spielberg had a big ally in Warner Bros., but they didn’t score all of the important licenses.

Naturally, the film cut short a lot of the story, quests, and details of Ernest Cline’s 2011 book. But I felt like it captured the essence of it. I enjoyed the big scene in the dance club, where the evil Sixers invade a disco in hopes of assassinating Wade (and his avatar Parzival) and his quest partner Art3mis. Parzival and Art3mis do a funny disco scene when Parzival buys dance moves that replicate John Travolta’s gyrations from Saturday Night Fever. I laughed out loud at that part.

I also loved a section of the film that was based on the Jack Nicholson film version of The Shining, which I remember loathing as much as author Stephen King did. Spielberg pulled out a few of the iconic moments of that film and brought them into a hilarious action scene in the movie. And I liked how this scene and others gave bigger roles to Aech and Art3mis than they had in the novel.

Keeping the core of the emotion 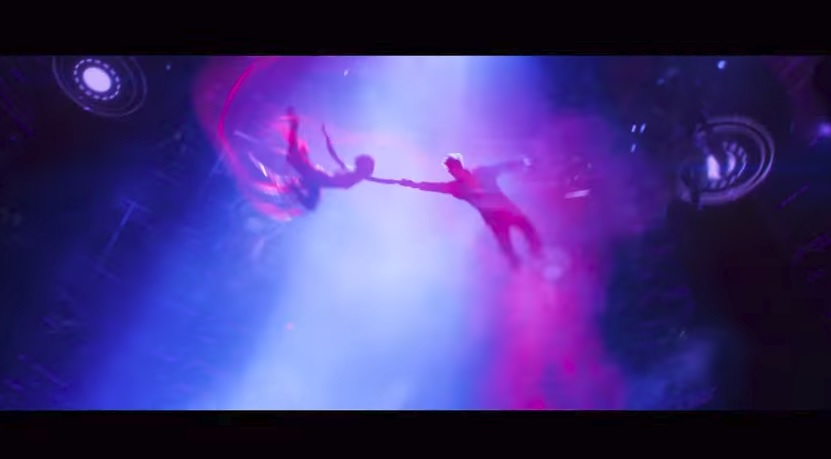 I also thought that Spielberg gave us glimpses of the emotional depth of characters like Art3mis, who resists Parzival’s advances so she can complete the quest on her own. It delves into Halliday’s whose own inaction leads to him surrendering his interest in Kira, the love of his life, so that she instead becomes the wife of his partner, Ogden Morrow. You get a glimpse of the tragedy that led Halliday to create an entire world to distract him from his loneliness.

There’s also a tiny snub that Halliday gives to business-oriented Nolan Sorrento, setting Sorrento on a quest to accumulate a business empire so he can take over Halliday’s creation. And there are small glimpses into the issues of spending too much time in VR and not enough in the real world, or falling in love with the avatar of Art3mis, rather than the real person who is hiding behind the avatar.

There were so many delightful pieces of the book that were left out, like Wade’s impoverished life and his discovery of the first Dungeons & Dragons puzzle and his struggle with the video game Joust. But book author Cline was a co-screenwriter on the film with Zack Penn, and I figure if Cline is OK with the big changes, then I’m OK with it too. After all, it would be really boring to watch somebody play a video game in a movie.

The battle at the end of the film is visually epic, and it was so fun to see characters from Halo and Overwatch, if only for an instant, as two sides engage in final combat. That scene lives up to the expectations I had when I first read the book, and that is quite a tall order. That was all I was really looking for in this movie: visuals that could point me to what the future would look like someday, either in the real world or the virtual world.

If there were some disappointments, it had to do more with the depiction of the real world. The world of 2045 is so dystopian that the 1980s are viewed fondly as the peak of American society. But Spielberg didn’t really visualize this part of our society as well as he did the virtual world. The characters, with the exception of Aech, also didn’t look like I expected them to be in the real world. That is, I expected them to be rather homely overweight people, like they were in the book. Instead, the actors in real life looked pretty much like pop stars. 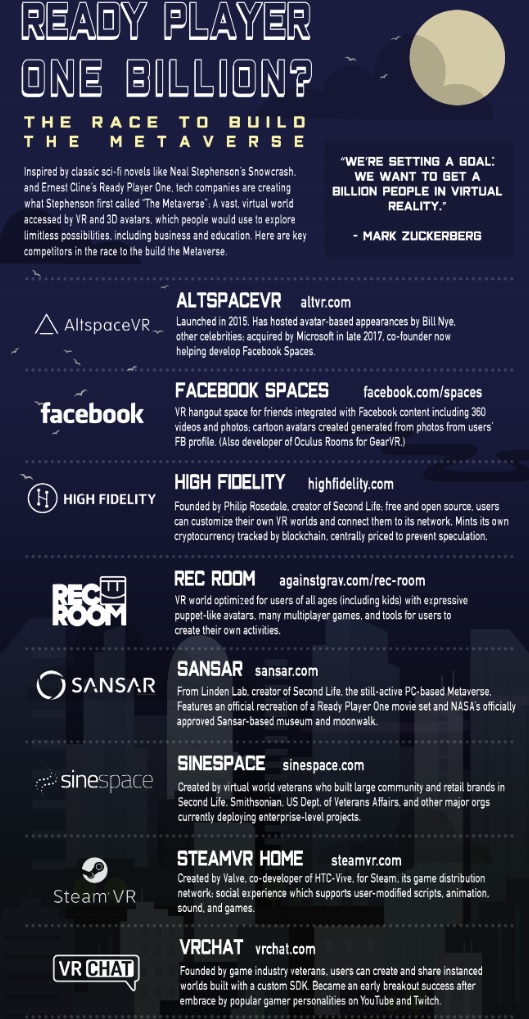 Above: The worlds that want to be Ready Player One.

The references that have echoed back into the real world are fun in part because people inspired by the novel have gone on to try to re-create it in real life. Palmer Luckey, founder of Oculus, asked his employees to read Ready Player One as he prepared to launch the second coming of VR. Greg Castle, an investor in Oculus and founder of the $12 million Anorak Ventures fund, named his company after Anorak, the avatar of James Halliday, the creator of the Oasis, the virtual world of Ready Player One. HTC has commissioned numerous applications based on Ready Player One.

Baszucki, the creator of Roblox, had a chance to interview Cline at the South-by-Southwest conference. The parallel between Halliday and Baszucki, who has built a world with 50 million monthly visitors, is quite striking.

“I was driving a car across Canada a long time ago all by myself, and the notion hit me, that this market and these technologies would be inevitable, and we have such an amazing responsibility and stewardship [role] to usher them in such a graceful way,” Baszucki said at the premier.

I think it’s going to be some time before we can create the world of Ready Player One, at least the way both Spielberg and Cline have envisioned it. But I appreciate that they’ve pointed the way, and that some people in tech and games and other industries are trying to make it happen. Lastly, check out the infographic above to get a sense of the candidates for the world of Ready Player One.