I just saw Steven Spielberg’s Ready Player One film, and I’ve been thinking about the haptic suit that allows the main character to feel the sense of touch in virtual reality. Now we’re getting a taste of that in real life through the Haptic Jacket being launched today by High Fidelity and NeoSensory.

I got to try out the jacket at a recent event at High Fidelity, Philip Rosedale’s open source social VR company in San Francisco. Rosedale (who will be a speaker at our upcoming GamesBeat Summit 2018 event) was the visionary behind Second Life, the online virtual world built by his former company, Linden Lab. He has teamed up with David Eagleman, founder of NeoSensory, to bring the sense of touch to VR.

In my demo, I went dancing in the dance club in VR, and talked to a bunch of people all at once. I even allowed strangers to touch my avatar in VR so that I could physically feel what it was like to have a sense of touch in the cyber world. I donned one of the vests, which was a fairly tight fit for me, and went into the world with another journalist.

NeoSensory is one of a number of companies that are creating hardware to extend the human senses, at first through a haptic jacket that enables its wearers to feel body contact and the environment in VR. Known as the exoskin, the device features 32 sensory motors and interfaces with High Fidelity’s open source architecture for hardware devices. 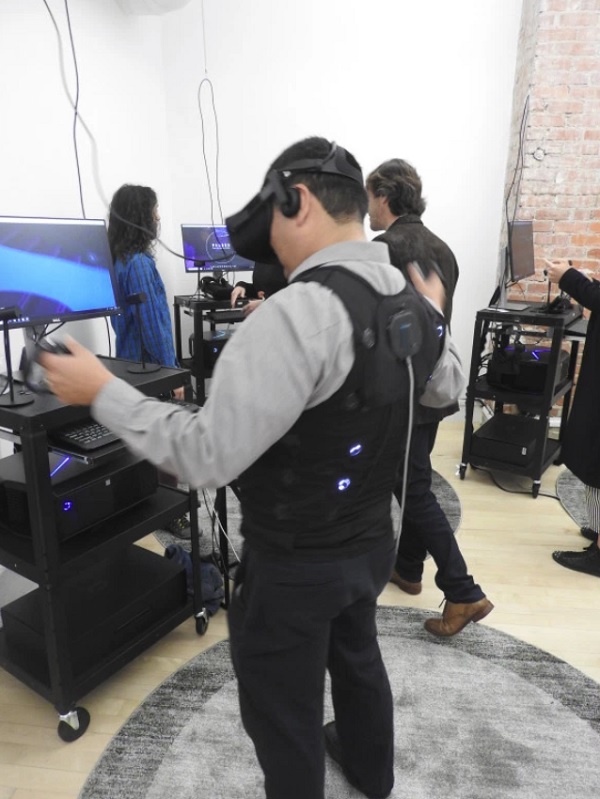 Above: The lights show someone is touching my back.

A wearer feels real-time, precise haptic sensations transmitted between users in a virtual world. The fast speed of the signaling means a wearer can feel another avatar’s tap or graze immediately — and two people can even perform a dance together, cueing off each other’s touch.

“The promise of VR is in collapsing the distance between people and putting them face-to-face,” said Rosedale, in a statement. “Touch is a critical part of the experience of human presence and communication. With their deep neuroscience research and experience with haptic response, NeoSensory has made a virtual skin that solves the absence of touch in VR.”

Eagleman, a neuroscientist and cofounder of NeoSensory, said in a statement, “When we feel the touch of another person, or the wall we’re running into, or raindrops hitting us, the realism of VR becomes even more compelling. We are thrilled to be collaborating with High Fidelity to bring this feedback into VR experiences.”

The exoskin is available for order from the NeoSensory website for $400.