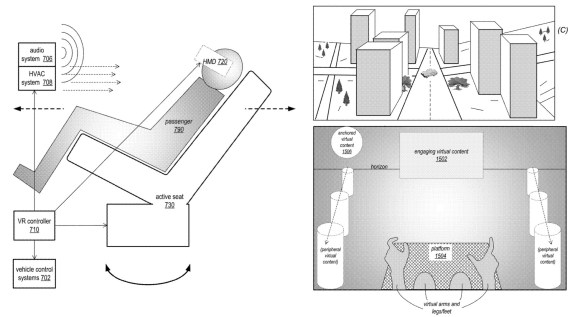 In recent weeks, the U.S. Patent and Trademark Office has published Apple patent applications for several fascinating virtual reality concepts, but the latest one takes the cake: Apple has applied to patent a VR system for autonomous cars that radically transforms the car’s interior and exterior environments, making the ride more fun for passengers.

Though the patent is framed as a way to mitigate motion sickness, Patently Apple notes that it offers a staggering glimpse into Apple’s visions for both VR and self-driving cars. Apple suggests that future cars could lack windows, instead using interior screens and VR headsets to display real or artificial surroundings. For instance, a tiny car could be made to look spacious or transformed into a completely different type of vehicle. The VR view would be coordinated with an “active seat” and motion sensors, enabling real-world car movements to be incorporated into the visual experience.

Passengers may choose to have relaxing virtual experiences … such as floating down a river or soaring over the landscape in a hang glider, or exciting virtual experiences such as a car chase or driving through a post-apocalyptic wasteland with zombies attacking … if the vehicle stops at a red light or for some other reason when fleeing zombies … the virtual experience may cause the vehicle to appear to stall and not allow the car to be restarted until the light turns green to build suspense.

Apple offers other examples, including using VR to have an author to read a book to you, livestreaming coworkers for virtual meetings, or enacting scenes from car races or movies. As the car would handle the driving itself, passengers could replace their actual surroundings with street-level views of real cities, such as London, or fictional cities, to make their trips more interesting.

Back in 2015, Apple was reported to be working on its own car under the codename Project Titan, an effort later vaguely confirmed by various executives. While work apparently shifted from a full electric car to autonomous systems, the company has continued to test self-driving vehicles and work on associated technologies. Until now, VR was not known to be a component of the company’s plans.

Apple’s VR car patent application was filed in September 2017 and published yesterday, joining several interesting Apple VR-related patents published this month. Most notably, Apple has applied to patent the use of VR to replicate a word processor or document editor — replicating a conventional computer screen in VR while the user types and scrolls with a physical accessory — a suggestion that Apple sees self-contained VR headsets as potential replacements for Macs and iPads. Though these patents might never be used in actual products, they demonstrate that Apple is actively considering multiple exciting VR applications while it publicly focuses attention on its AR initiatives.