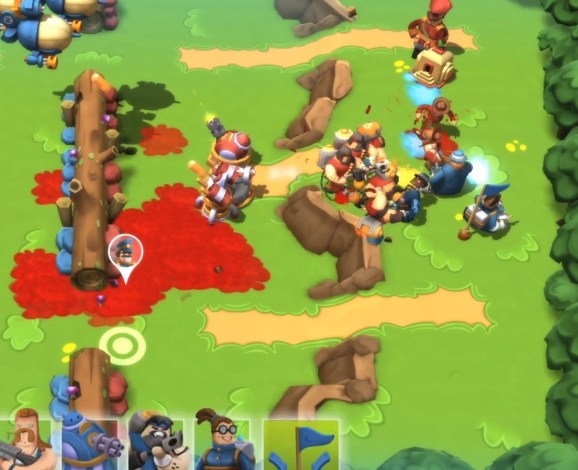 Jam City has grown to more than 500 people, rising to become one of the most successful mobile game companies. It scored big with titles like Cookie Jam, and it is working on a highly anticipated Harry Potter game. But it made a big move a little while ago by acquiring the assets of Brainz, a Bogota, Colombia-based mobile game developer and maker of the upcoming action strategy game, World War Doh.

Josh Yguado, president and chief operating officer, told me that it’s better to be big because those companies are getting biggest slice of the pie in the $50 billion mobile game industry. And getting your unfair share of pie is a lot better than being eaten. But Jam City’s ambitions are about more than just gobbling up rivals in mobile games.

“I think we want to go from being just a mobile games company to being more of a mobile entertainment company,” said Yguado, in an interview at the recent Game Developers Conference in San Francisco. “To us that means launching games and franchises that don’t just live as mobile games, but could lend themselves to becoming TV series or web stories or comic books. We want them to be able to stand on their own, narratively.”

Yguado is also going to speak on making intellectual property games work in mobile at our upcoming GamesBeat Summit 2018 event on April 9-10 in Mill Valley. 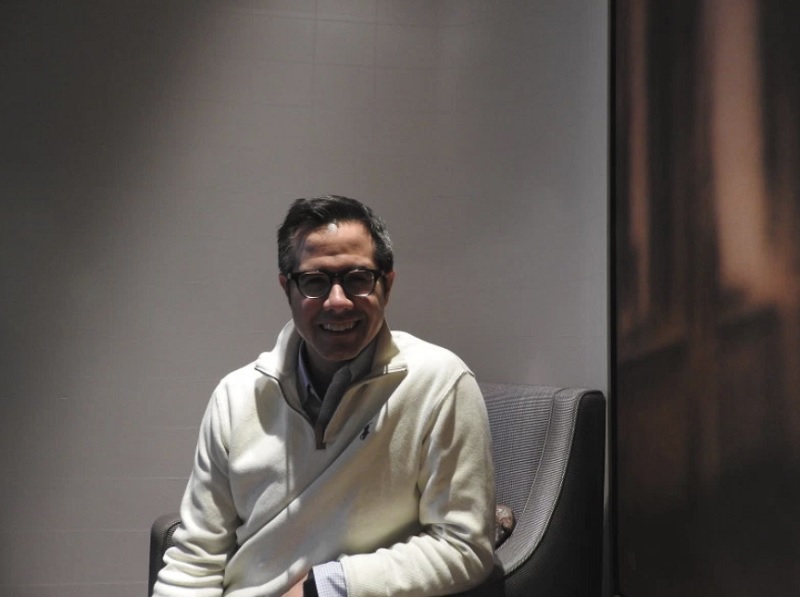 Above: Josh Yguado is president and chief operating officer of Jam City.

GamesBeat: Do you approach GDC with a certain feeling this year?

Josh Yguado: I’d say the space is consolidating pretty quickly. The biggest leaders seem to be getting more and more share. We’re looking to be one of the consolidators. You may have heard we did the Brainz acquisition a week ago. It’s a little one, but we’re looking to do more. We’re spending a lot of our GDC talking to studios about investments and acquisitions.

GamesBeat: They had an interesting game there.

GamesBeat: It seems like following the contests and awards is a good strategy. Keeping an eye out.

Yguado: Honestly, we were talking with them already, even before they’d won anything. We loved the team. We thought the game was super fun. As you know, it’s not easy to get to fun. Some of the best-laid plans don’t result in fun. The fact that they had a base game — it wasn’t done. It was probably only about 50 percent complete. But it was already so great and fun to play. That was a really good sign. That’s what got us interested in the beginning.

GamesBeat: It looked like you caught them at a good stage. They weren’t already famous. They were on the cusp of big things.

Yguado: Knock on wood, but that’s what we believe. We’re really excited for the title. It probably adds a bit more risk to get them at such an early stage, but we have a great feeling about them.

GamesBeat: This contest that Unity announced last night, along with Universal, it seems like a smart way to try to get some of those indies matched up with brands or movie titles. They don’t always have that opportunity.

Yguado: It’s a great concept. I’m excited to see what comes out of it. I will say, though, that historically, these contest-based jam initiatives often don’t come up with great games. I don’t know why that is. Maybe it’s because sometimes it takes a lot longer than six months or a year to come up with a truly great game. These contests tend to be pretty restrictive from a timing perspective. But we’ll see. It should be interesting.

GamesBeat: How do you look at your road map going forward? How are you going to do that consolidating?

Yguado: Even taking a step back from that, I’d say we’ve had an absolutely killer 2017. We’re at all-time highs across the board — record revenue, record EBITDA. We have these enduring franchises that keep performing at the same level or growing slowly. We also have a bunch of new games that came on line in 2016 and 2017 that are contributing more and more. Everything is stacking up and resulting in overall growth.

In 2017 we were one of the top 10 publishers, and I think we’re one of the few where no game represents more than a third of our revenue. We’re pretty well diversified. We’re going into 2018 in a good position, where we have about 500 employees. We have six studios now, with the Bogota studio. We think about two-thirds of our titles will be organic, and about one-third of our new titles will be from acquisition. We want to do one to two acquisitions a year and release three to four games a year. That’s our plan for the next three years.

For 2018 in particular I think we have the best slate we’ve ever had before. We have Harry Potter. The hype around it is like nothing we’ve ever seen for a game before. We have approximately 2 million pre-registrations across both Google and iOS. We have more than 100,000 user-generated videos on YouTube. The excitement around the game in the first three days of release in soft launch—there were more side-loaded downloads of the game in other territories, people who were crazy to get the game and figuring out how to get it, than actual legal downloads in the soft launch territories. We feel really good about that title. We think it has the potential to be one of our biggest ever, if not our biggest ever.

GamesBeat: Is that using what Google just announced, the Google Maps games API?

Yguado: No. Niantic is also working on a Harry Potter game, which is going to come out, from what we’ve heard, quite a bit after ours. I don’t want to speak for their game, but it would make more sense for them. For us it’s more of a story-based game with a lot of RPG elements. You actually have the opportunity to be a student at Hogwarts. I can show you a build at some point if you’re interested. But it’s your chance to live the life that Harry Potter lived. There’s a whole drama that unfolds. You have to solve problems and team up with your friends. Learn spells, go to classes, duel, play Quidditch. It all comes together in the game. It’s a lot of fun.

We have three big titles this year, including Harry Potter. We have World War Doh, best of 2017 from Apple for tech and innovation in Latin America. It’s a super talented team and a really fun game. And then we have what we think is our best puzzle builder game ever, a culmination of everything we’ve learned over the past five years. Early testing is off the charts. The innovation scores are higher than we’ve ever seen on a puzzle game before. The KPIs look amazing. That’s Wild Things. We’re really excited about that title. These three, we think, will set a new standard for Jam City’s success.

GamesBeat: What do you think you add to World War Doh that it wouldn’t have otherwise?

Yguado: Number one, in terms of live game management and event management, we’re pros at not only launching games, but having them grow and sustain over time. That comes from having a regular content cadence, regular events, teasing and marketing those events in a big way. They’ve created a base game that’s a lot of fun, but I think we’ll be able to work with them in a really good way to help the game sustain.

I’d say number two, over the years we’ve gotten really good at working with IP, both third-party and internally generated IP. The IP for this game has the potential to live beyond the mobile game world. This could be an entertainment franchise. Someday the Doh, the World War Doh world — we’re going to create videos around the universe. We’re going to do a lot of partnerships and promotions. We’re going to build out the backstory of the characters. We’ll be able to help contribute to the team.

Last is the usual stuff: analytics, machine learning, and user acquisition. It’s not so sexy, but it’s a requirement to scale a game in this day and age. We’ve invested a lot in that over the years and we’ll be able to give them a lot of help.

GamesBeat: I saw you guys did some things with influencers on Cookie Jam. Would this game be good for making use of influencers as well, getting the word out?

Yguado: All three games could be really great. Harry Potter, obviously, has a really big fan base and influencer base. We’re going to be creative about how we work with influencers with Harry Potter. 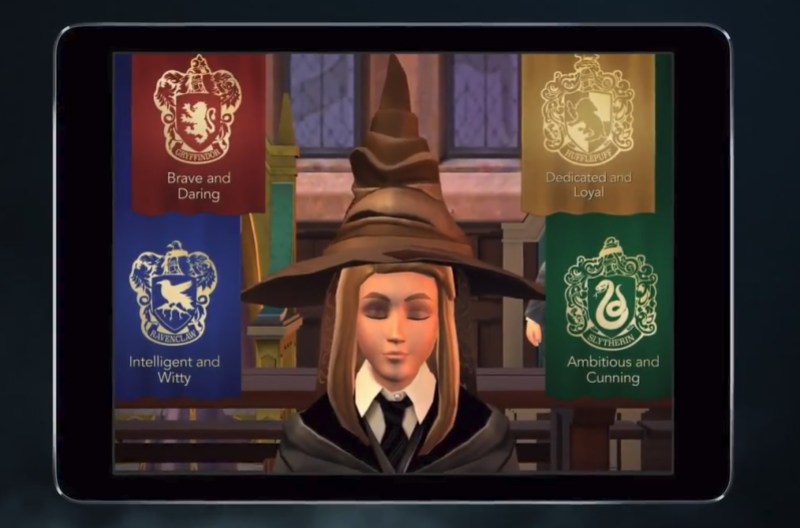 Above: You can choose your house in Jam City’s Harry Potter game.

Yguado: Or that are gamers. There are so many Potter fans and sites and blogs and worlds that people have created. There are lots of folks to work with. Obviously the Wizarding World continues to exist with Fantastic Beasts. But Harry Potter itself is not a narrative that people can continue to enjoy. The fact that people can go to this place and get new stories from Hogwarts in the Harry Potter world is something people really want. A lot of the super fans and influencers will not just be willing, but really excited to help out with the launch of that game.

Wild Things is super cute, cuddly characters. We’re also doing a light video series around that. This is one where fans are going to get really excited about it. We’re doing some influencer voice-over in the videos. They’ll be involved in the creation of a lot of the assets, and they’ll also help with the promotion of the game. And then World War Doh — we’ve seen with a lot of funny mid-core strategy games that influencers are excited to get into larger PvP battles and events. We’re going to pull out all the stops and do something fun for the launch.

GamesBeat: It seems like influencers are becoming part of the normal game plan.

Yguado: World War Doh has a lot in common with Clash Royale in that it’s synchronous multiplayer arena-style gameplay. It lends itself well to live PvP with influencers.

Yguado: I think we want to go from being just a mobile games company to being more of a mobile entertainment company. To us that means launching games and franchises that don’t just live as mobile games, but could lend themselves to becoming TV series or web stories or comic books. We want them to be able to stand on their own, narratively.

With our legacy games, Cookie Jam and Panda Pop, they’re great games, but they don’t lend themselves as well to this world-building I’m talking about. I think with the new franchises we’re putting out, it’s going to be on a new level from an entertainment and franchise perspective.

GamesBeat: Would you say you’re growing up from games with strong gameplay, but that don’t necessarily last a long time, to games that are more ongoing, deeply engaging services? I can imagine Harry Potter lasting a lot longer than, say, a puzzle game.

Yguado: Longevity is a tough one to measure by, because a lot of these puzzle games are some of the — I mean, look at Candy Crush. Cookie Jam and Panda Pop continue to be top performers. I actually think that these puzzle games, without a very deep narrative or character development, can be really long-lived. But it’s hard for them to expand beyond just being a mobile game.

It’s important for us to have games that are the future Scrabbles and Monopolys of the world, games that stand the test of time, games that people will play 50 years from now. That’s absolutely important. But it’s more than that. It’s also creating narrative worlds that can live beyond just being a game.