If your nephew became an acolyte of a cult in 1970s South America, what would you do to get him out. That’s the story behind The Church in the Darkness, a new game coming from director Richard Rouse III, who led the development on The Suffering and worked on titles like State of Decay, Quantum Break, Sunset Overdrive, and Rainbow 6.

I met Rouse as the organizer of the Brain Dump developer talks at the MIGS game event in Montreal. Now he’s getting ready to launch a top-down action-infiltration game where you have to infiltrate Freedom Town, a cult in the South American jungle. You learn the psychology of why people join cults and entrust themselves to charismatic leaders with ulterior motives. I interviewed him about The Church in the Darkness, which explores how far you are willing to go in uncovering the truth and saving the cultists.

Rouse studied real world cults from the 1970s and made a realistic game filled with choices and consequences. He said the game is designed to be replayable, as the narrative changes dynamically and you can shift your gameplay strategies to match the circumstances.

I played the demo, and tried going around the numerous guards in search of my nephew. But I got caught and had to face the music in a cage with cult leader Isaac Walker. I was given leniency, escaped again, and got caught and killed a second time.

The game is coming out this year on Steam, the PlayStation 4, and the Xbox One. 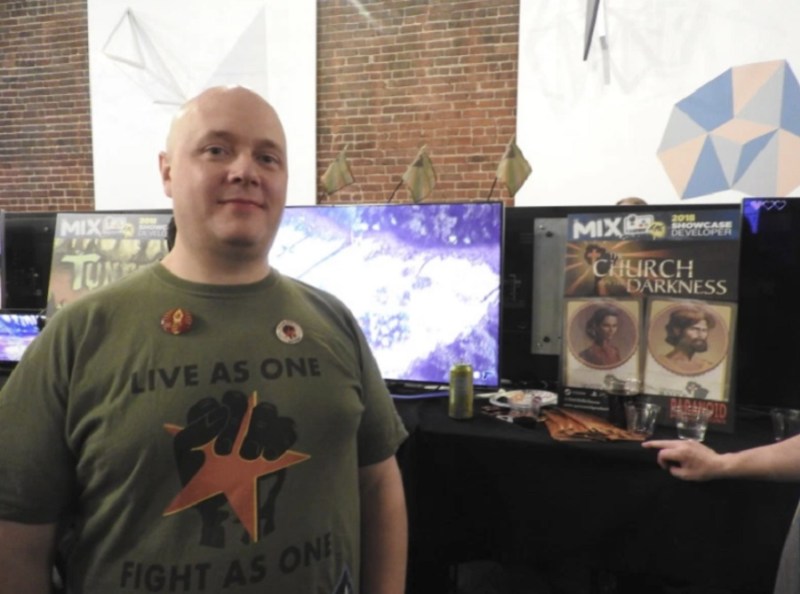 Above: Richard Rouse III of Paranoid Productions at GDC 2018.

GamesBeat: What’s the status of Church in the Darkness?

Richard Rouse III: We’ve been working on it for three years and a bit. We’re working hard to finish up this year. It’s definitely a micro-indie in terms of team size. It’s not any kind of triple-I game. We don’t have a studio per se. Everyone works at home. There are probably 15 people in the credits, but as far as people currently working on it there are only five or six. Most of us aren’t full time on it, although I am.

GamesBeat: Where did the impetus for all of this come from?

Rouse: You’ve probably heard the story a hundred times from different people. I’d been doing triple-A for many years. I found that there were certain games you could do in that space, and certain games that would get you in trouble in that space. I understand why that is, because when you’re trying to sell 8 million copies of something you don’t want to risk upsetting half the country. I just found that people wanted to avoid certain topics. That was part of the impetus, just being able to do a game without having to worry quite so much about that sort of reaction from people. And then just also having worked on the giant projects and enjoyed doing that.

The last job I had before this was at Microsoft as a designer in their publishing organization. State of Decay was probably the one I spent the most time on, and then also worked on things like Sunset Overdrive and Quantum Break. But when you’re in that publishing world you’re doing a very different job than when you’re on a team. You’re coaching and consulting and advising, but not doing the actual development yourself. I missed that.

GamesBeat: When did you leave Microsoft?

Rouse: It was almost four years ago now. I had thought about going indie before, but there were other reasons that the Microsoft job sounded too interesting. It got us back into the U.S. I’d been in Montreal before, at Ubisoft. I’m in Seattle now, or in Redmond to be exact. I’m still right next to the Microsoft campus.

GamesBeat: This particular story idea, doing something around a cult, where did that originate?

Rouse: A few places. I’d been fascinated by cults as these alternate societies that live by their own rules and view the world differently than everyone else does. Within them they can have a lot of members who all feel like they’re doing the right thing, but we all might look at them as outsiders and think they’re crazy. When you’re in the group it feels like it’s what you have to do and everyone else is crazy. I found that, the way they form their own little societies, really fascinating.

As I studied cults, finding out just that—you don’t think you’re in a cult. No one sets out to join a cult. You join a religious movement, or a new political endeavor, or a self-help group. Something you think that is going to help you in some way, or help other people, or that just feels like the right thing to do. Somewhere along the way you may realize things are getting weird, but now you’re in it. Everyone you know, all your friends, maybe your family are in it. Often you’ve given them your money. It becomes difficult to decide that you don’t want to do this anymore. Then people create self-justifying—well, it’s not as bad as they say. There are some beatings, but it’s needed for the good of the group, whatever it may be. I found that fascinating.

For a game, it was fascinating in a couple of ways. In a game, it’s cool to go to a place that’s like the real world but a little bit different. It’s a little enclosed ecosystem. It felt like a cult group that had moved itself to the jungle in South America is a perfect isolated place to build a game system.