Also, looking at it in terms of dynamic storytelling, which is something I’ve been fascinated with for years – ways players can make choices in games, or ways that game narratives can be different each time you play – the interesting thing about cults is it’s often hard to tell if they’re a really bad organization. Are bad things happen? Are they trying to bring about an apocalypse? Or are they just radicals, just progressive, just viewing the world in a different way that’s not going to hurt anybody? In a free society someone should be able to do what they want to.

When a cult tragedy comes up, people will say, “Why didn’t anybody stop this?” Well, it’s difficult to know if they’re actually going to do it. These groups can all seem very similar from the outside, the groups that are benign and the groups that are not. So, wouldn’t it be cool to play a game where you can see both sides of that? You’re going in and you don’t know if the cult group is bad or not. You have to figure that out while you play.

GamesBeat: Do players go into this assuming that it has to be bad?

Rouse: Yeah! Battling those sorts of expectations is always a tricky thing, particularly in games, where you have the option to start shooting people, or the option to do other violent things. Definitely, when we’ve shown it at trade shows – PAX, PlayStation Experience – it’s been interesting to gauge people’s reaction. Some people think, “Oh, they’re just farming here. I won’t attack the farmers. I’ll just shoot the people who are shooting at me.” This is a radical group, and regardless of whether they’re the less violent or the more violent version, they’re always hostile to trespassers. As the player you’re trying to infiltrate the group and find a family member in there, see if they’re okay, and then decide if you want to get them out or let them stay.

But different players will bring some of their own preconceptions. It’s a Christian socialist group in the game. They have very strongly held views that can set people off. Some people are very anti-socialism or pro-socialism or anti-Christian or pro-Christian. People come in with their own expectations and I think it’s the game’s job to show them, “Hey, there’s more nuance to this than you might think.”

The goal of the game is for it to be replayed, too, so you can see these different scenarios, the different ways the cult might operate. That changes from game to game. You don’t know if it’s the more dangerous or the less dangerous cult. You’re trying to figure that out. Hopefully someone might go in with their preconceptions and play a certain way, and then realize, “Oh, I don’t like the ending I got. Let me try again and see if I can get a different outcome.”

GamesBeat: Are you trying to hit particular numerical goal of some kind? Save a certain number of people? Or is it something different?

It doesn’t give you anything like, “Achievement Unlocked: Perfect Ending.” It’s trying to be a bit more complex than that.

GamesBeat: Is it a difficult for you that Far Cry 5 is coming out with a similar theme?

Rouse: Obviously I’ve been watching that game, and I’ve been fascinated by seeing them announce that. We announced probably a year before they did. I’m a fan of the Fry Cry games. I liked 2 and 3 a lot. Some of what they’re trying to do there looks really interesting. It looks like a game I want to play. But at the same time I know it’s a Far Cry game, and at the end of the day it’s about crazy rampages and insane set pieces and explosions. My game is a game with no explosions in it.

When I’ve talked to people about it—when you’re a developer, particularly a small guy, and something like that happens, you can get pretty bummed out about it. But talking to people, they’re like, “Your game is so different from that.” Obviously there’s the subject matter. They’re present day in Montana. We’re 1970s in South America. There’s some difference there. We have a much more religious group than they do. They seem to be more just crazy. Again, this is just my impression. But there are differences narratively, and the gameplay you’re going to be doing there is first-person shooter, have a good romp through Montana. You’ll be hunting bears and whatever you do there.

For my game it was really, “Can I take the systems of a game like that, or Dishonored, or Metal Gear, and make it feel more plausible?” Even though you’re still playing with game mechanics – there are still areas where you have to take liberties to make gameplay work – just always think of it as, “What would really happen in this scenario?” If you went into this isolated cult group to rescue your nephew, would the approach be, “Murder everyone you meet until you find him”? Probably not. That would make you a terrible person.

Instead, this game is more about evading detection. You can get into those scrapes if you want. It’s ultimately up to the player how they want to play it, lethally or non-lethally. We give full support for both directions and anywhere in between. But it’s more likely that players will go in, try to avoid detection, maybe get into a scrape, get out of it however they have to, and keep looking. It’s more about searching and staying under the radar than having a crazy shootout. 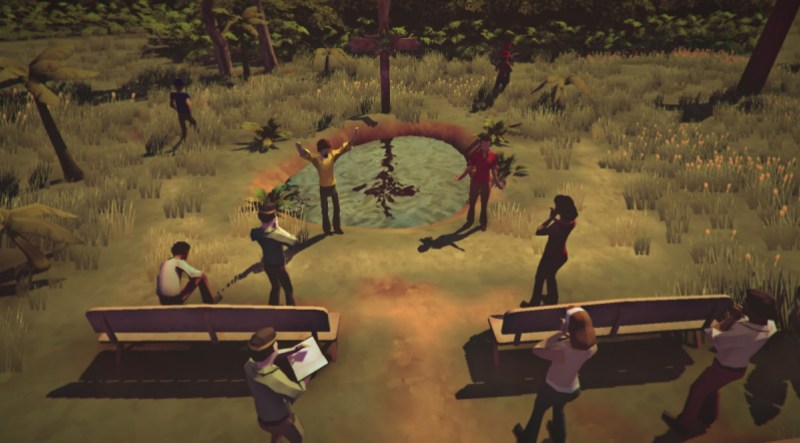 Above: The Prayer Pound in The Church in the Darkness.

GamesBeat: Is it related in any way to Jonestown and Guyana, or is it entirely original?

Rouse: It was inspired by a bunch of different cult groups. I found the 1970s to be sort of the most fascinating time period for cults in a lot of ways, just because in that era you had people—we forget about the Cold War and the threat of nuclear annihilation around the corner. People had a much more positive outlook in the ‘60s, changing the world through peace and love, and it hadn’t worked out. Vietnam wore on and people became really disillusioned, became more likely to join these groups and do something more radically different. I found that fascinating.

That’s the type of group that Jonestown was. They were a group that saw the political tumult and didn’t feel like there was a place for them there, that they had to leave. Obviously there were other things going on with Jones, his power in all of that. But there were other groups.

One I like to bring up is the Source Family, a lesser-known group that had a similar trajectory in some ways. They were southern Californians, all vegetarians, starting out in this health food restaurant and just got bigger and bigger. The guy who ran it turned himself into a guru. They ended up moving to Hawaii and it didn’t go well, but it didn’t end as violently. The leader went on this crazy hang-gliding trip and ended up dying, and then the group just dispersed. But before the end he had been proclaiming himself a god for a while, and then he said, “Wait, I’m not a god after all. Running an agricultural compound in Hawaii is much harder than I thought. Maybe we need to break up.” There’s a great documentary about that one that shows a group that went the other way, and as a result became much less known.