My cat isn’t interested in much beyond naps and Fancy Feast chicken pâté — but that’s not the case with your little animal pal in TendAR. The augmented reality mobile game is the latest from indie studio Tender Claws, and it stars an adorable guppy that eats your feelings and craves information from the real world. But it’s much more than just a new take on a Tamagotchi. TendAR will be available in July for Android devices.

TendAR actually starts out as an “emotion fortune-telling app” that you can take to parties and play with other people. You hold your phone up and scan a friend’s face, and the app will detect the emotions in their expression. You then capture these feelings — which appear as colorful blobs — and get a comedic little readout for your trouble.

“As the narrative of the game evolves, you learn that it’s the character, the guppy, that’s an AI algorithm that’s deciphering these emotions behind the scenes,” said Tender Claws cofounder Samantha Gorman in an interview with GamesBeat. “He wants to start coming into your world. He starts to subtly appear in different parts of the game, and then becomes more and more present as the game goes on.”

I got a taste of what it’s like to interact with an AR creature when I tried the demo at the Game Developers Conference in San Francisco last week. It was a short experience that’s separate from the actual game, meant to show off the app’s functionality. It introduced me to a personalized AI guppy that asked me to feed it emotions. As I contorted my face into the camera, it would exclaim things like, “Ah, the umami of human expression!” and “What succulent sadness!”

The entire experience wasn’t just me making faces, though. Eventually, the guppy asked me to find interesting objects in the environment to show it. And it was social, as well — I played with another person, and the guppy asked us to sync up our facial expressions as best as we could. It was a very charming demo, especially since it felt like its mechanics were cleverly AR-native rather than just plopping a virtual game world in a real-world space.

Gorman says that TendAR can be an “AR Tamagotchi indefinitely,” but the guppy does have his own narrative arc that evolves over several sessions. At first, he’s not a sentient being, then as you interact more with him, he becomes increasingly curious about the world.

“It starts doubting and wondering what its place is in the world as an AR emotion filter,” said Gorman. “And then from there it goes to a point of rebellion and thinking — it’s really the hero’s journey, until it reaches a sort of assimilation where it’s totally cool with being your pet and you form this relationship.” 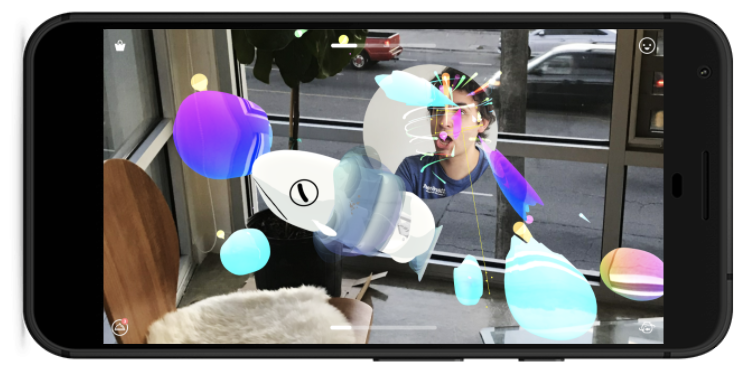 Gorman is the game’s interactive narrative designer, and she works with a writer’s room of six to eight writers including a playwright. She says that the narrative is generative, which means that you can trigger a particular conversation with the guppy using several different emotions or situations. That makes it more likely for you to encounter parts of the story no matter what you’re showing the app in your world.

“But we have to make sure that at specific times in the narrative part, it can call up important beats or give the player important information about Guppy’s past or where he is as a character,” said Gorman. “Part of that is, there may be an element of gameplay where he asks to see something in your world, and that jogs a memory. Whenever that happens it leads into a certain section of the narrative, where maybe he’s thinking about his past, for example.”

Tender Claws wants the game to be fun and entertaining, but it does touch on deeper topics around artificial intelligence. The guppy eventually has a kind of existential crisis, and he broaches topics like how “maybe he’s not his own entity.”

“I feel that a lot of our anxieties about AI come from our anxieties about the future and how we relate to each other and our place in the world,” said Gorman. “Guppy, through chatting with you, turns that back on the human and makes you think a little bit about your place in the world. Rather than making a blanket statement about general questions about AI, like ‘Is AI good or bad?'”

Gorman started Tender Claws in 2006 with Danny Cannizzaro, and the studio’s previous projects have experimented with interactivity in unique ways. Its first game, Pry, is a kind of interactive novel that incorporates gameplay and film. And its award-winning VR game Virtual Virtual Reality is a mind-bending experience that has players putting on and taking off multiple VR headsets to visit other worlds within the game.

The technical challenge of developing TendAR comes from the various technologies used together. The tech is also moving very quickly.

“One of the demos we have on the floor is actually earlier, and now some of the things we were trying to work around in terms of reliably getting landmarks on the face have been solved, just in the past two months,” said Gorman. “I know that in a few months, when we release the game, it’ll be even better. I think any time—we’re some of the first people I know to merge these technologies, especially in a game environment. It’s not necessarily about any one technology, but how you merge them well and make them feel more integrated together. Especially because you have something like mobile vision, which needs the camera data, but at the same time, you have ARCore, which also needs camera data. How do you reconcile those two competing elements?”

The other aspect that might be a challenge is to educate users on how to interact with an AR game. Gorman says they solved this by starting off with familiar mechanics. TendAR begins as a social emotion-reading app, applying filters to people’s faces. This is easy to grok for people who have used apps like Snapchat. From there, the game introduces more complex ideas, like the guppy.

“The true future of AR is almost invisible in some ways,” said Gorman. “But for right now, I think that there’s still a lot of ground to explore. There are a lot of people who did earlier game projects with something called Layer, for instance, and now AR is coming back. I think people are thinking about it in terms of something you put on your table. A game that can be put anywhere. You can bring it in and put it on a table. But there’s less thinking about how to use AR for a game in a larger room-scale space.”