Chris Hecker has been making SpyParty full-time for eight years, and he’s finally hitting a big milestone. While he’s already sold copies on his website, the veteran gamemaker is putting SpyParty on Steam Early Access beginning April 12, and it will have 21 new animated characters, 10 art venues, and eight missions with a lot of variants.

SpyParty is duel of wits. A human sniper tries to discover a human spy who is trying to blend in with other artificial intelligence characters at a party. The spy has to accomplish tasks like planting a bug on an ambassador, while the sniper has to identify and shoot the spy. Now Steam players will get a chance to see whether it’s possible to make a fun game based on observing subtle human behavior, rather than just a game full of action.

It sounds simple enough, but Hecker has been working on it ever since he was laid off from his job at Maxis (where he worked on The Sims) at the end of 2009. Hecker has sold 24,000 copies to date over the past five years on SpyParty.com. And with the feedback, he has been meticulously working with a small team to sharpen the competitive multiplayer gameplay about subtle human behavior.

“It’s a game about perception,” said Hecker in an interview with GamesBeat. “This is a game about AI, flipped on its head. The player has to pretend to be an AI.” 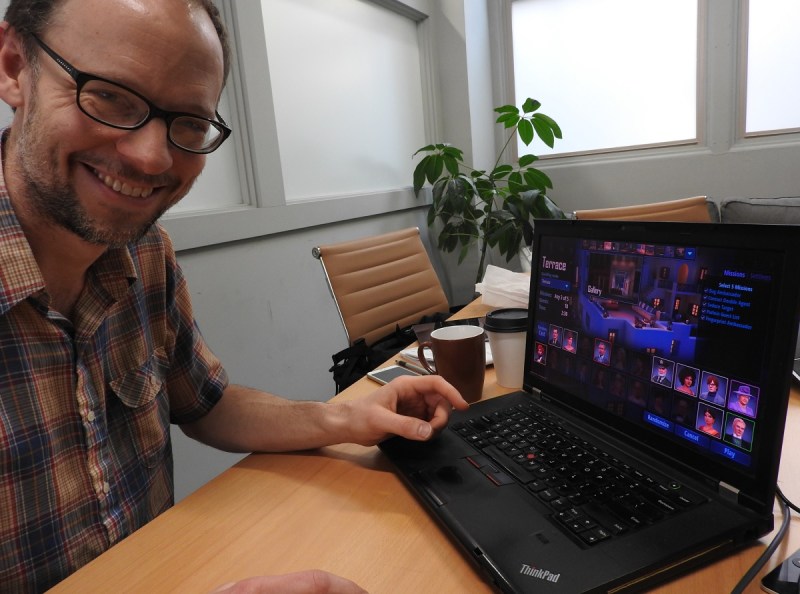 Hecker is understandably nervous about this milestone.

“I’ve worked on it full-time for eight years. I worked on it part-time before that and I don’t even want to do that math,” said Hecker, in an interview with GamesBeat. “Twenty-four thousand [copies] sold is great for an indie game, but hopefully that is not the sum total of people in the world who want to play the game. Now it’s a weird thing to be 47 and have a kid and a mortgage in the Bay Area and not having any idea what my life looks like in 30 days. I have no visibility. I would really like to keep working on this game.”

On April 12, Hecker’s Steam roll out will come with a matchmaking system. And today, Hecker is revealing the new art style. He is revealing six new maps in this art style today, in addition to four maps release earlier. He’s also added has a sleeker user interface, a sophisticated 40-minute tutorial, and a replay system that shows you exactly where you made a mistake in the game. Spy Party will cost $25, in contrast to the pre-Steam price of $15. 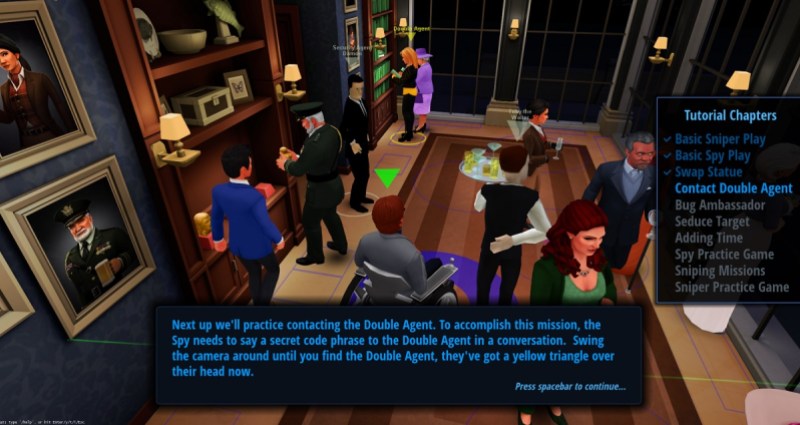 Above: SpyParty has a deep tutorial.

One player is a spy, hiding in plain sight at a fancy cocktail party. The spy blends into the crowd and does missions. The sniper gets to fire only one bullet to stop the spy, and so the sniper has to be sure who is the real target.

The challenge for the spy is to act as if you were an AI character, and the challenge for the sniper is to discern subtle human qualities. Various things can give the spy away, like moving in a distinctly human fashion. The hard part for the spy is you have to fulfill missions, like getting a message at a statue, in a way that can visibly give you away. Learning to walk the way an AI walks is a skill in this game, Hecker said.

“If the spy is too easy to find, you can adjust it and make it harder,” Hecker said. “Each of the maps are aesthetically very different. We have a lot of diversity among the characters. It’s architecturally diverse, and diverse in game designs. Each map explores a different part of the game design space.”

There are three different kinds of “tells,” or ways to discover the spy. A hard tell could be where you as the sniper see the spy plant a bug on the ambassador. There are “soft tells” that require more detective work. If something happens in a conversation and only a few characters are talking, then you can deduce that one of those people in the conversation circle is a spy. The sniper can then mark, or “highlight,” the suspects and “lowlight” the ones who are not suspects, making the visual task easier.  And the third way to tell is through behavior, like someone acting more intentionally than an AI would. 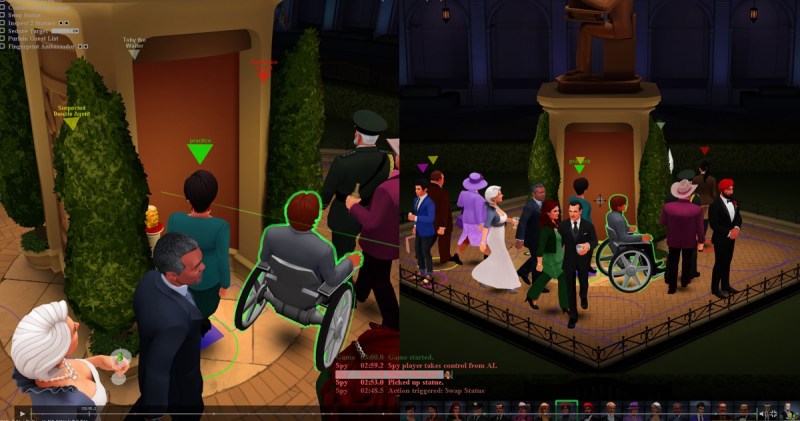 Above: A replay system shows you where things went right or wrong.

The new content drop shows what Hecker has been doing with all of that time he has spent on the project. The tutorial is visually informative, and the user interface looks modern. When you get shot now, you get a screen that presents you with some information. You can set up a game in the user interface more easily, customizing it as you wish, and your opponent has to agree to the rules before the match launches. The art makes the game much more accessible. And each level is tuned to be balanced.

Hecker said that a strong community has developed around the game, with many players putting in more hours than he has in the playtesting. The players at the top of the leaderboards have put in almost 20,000 games and 1,000 hours into SpyParty’s beta version. They have played tournaments, developed strategies, made suggestions, and reported bugs.

The game now has 21 new art characters with custom animations, and 23 characters in an older art style. The 10 older art maps are also available. It has configurable game modes with tons of variations possible.

“Old timers would kill me if I removed them,” Hecker said. 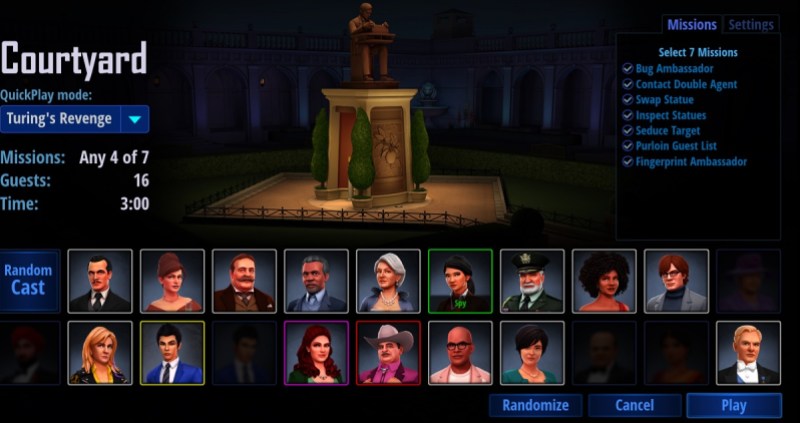 Above: SpyParty has a fresh user interface.

Spy Party has a replay and spectating system, with more than 300,000 game sessions available for viewing. You can easily share the three-minute game sessions on YouTube. The replay and specating modes are all about making the game more like an esport and more fun to replay over and over again, Hecker said.

The maps are from John Cimino, the character and environment artist who also worked with Hecker on Spore, Maxis’ 2008 life/evolution/strategy sim. And artist Reika Yoshino worked on the game for a year before going to work at Thatgamecompany.

During Early Access, Hecker hopes to add new features such as animations in the background. He would love to add multiple spies and snipers.

The game has no blood or violence.

“It’s like a Hitchcock view of violence, when you couldn’t show that violence in a movie,” Hecker said. “The threat of violence while you play gives the tension.”

As for the amount of time it took, Hecker doesn’t think being an independent game developer was a drawback. That is, he doesn’t think he could have made the same game with a publisher and a team of 20 people in two years.

“Sometimes things have to simmer for months,” he said. “Then you get the answer. Having the time and space to do all that is great. There is eight years worth of stuff in this game. This game is really big in depth. I’m happy to keep working on this game for a long time.”

Here’s Hecker’s descriptions of his latest maps, or venues, for SpyParty. 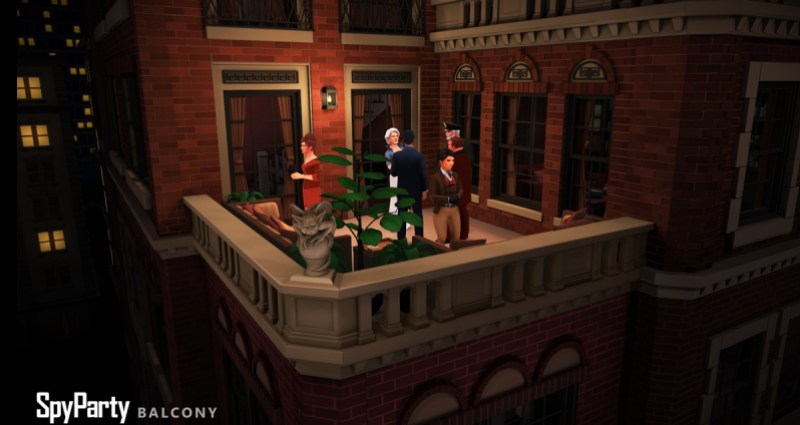 Above: SpyParty Balcony level. The sniper can see everyone at all times in this one.