Indie studio Rose City Games’s The World Next Door is a quirky mashup of a visual novel and a role-playing game with real-time combat. It has teamed up with studios Crystal Fish Games and Sleep Ninja Games on the effort, which will be the first title that manga publisher Viz Media is taking on as a publisher. Its release date is still to be determined, but the title will debut on PC.

During the Game Developers Conference in San Francisco, I headed over to Viz Media’s office to give the demo a spin. In The World Next Door, you play as Jun, a human who’s visiting the world of monsters from the realm of humans in a kind of ritualistic cultural exchange. Unfortunately, she misses her window to go back home and now she’s trapped — which is a huge problem because humans can’t survive outside their own realm. Her days are numbered if she doesn’t make it back to the human world in time.

Within a few minutes of the demo, I’d met The World Next Door’s colorful cast. They’re humanoid monsters of varying archetypal abilities — one is a healer, another is a brawler — and Jun can develop deeper relationships with them as the game goes on. Depending on their level of friendship, she’ll be able to take them on quests as she visits different shrines to try to find her way back home.

Most of demo was visual novel-style conversation, complete with dialogue options that can affect how characters react to Jun. However, Rose City cofounder Corey Warning tells me that the rest of the game features Japanese RPG-like gameplay where Jun walks around a town with a top-down view and talks to characters. The combat, however, isn’t like that of a typical JRPG.

The World Next Door’s battles feature a playing field that looks something like a chessboard with different colored tiles, each with runes representing various types of attacks and special abilities. To fire off a lightning bolt at your enemy, you must run over and activate clusters of three tiles or more, similar to a match-3 game. Some attacks are localized — like a whirlpool that sucks the monster in. And other tiles heal you up.

“Right now, the plan is to have multiple playable characters you can swap out with,” said Warning in an interview with GamesBeat. “Who you take out to which dungeon affects the strategy there. We want different abilities for each character. If you have a shrine that needs some heavy fire attacks or something, you might want to take one character versus another.” 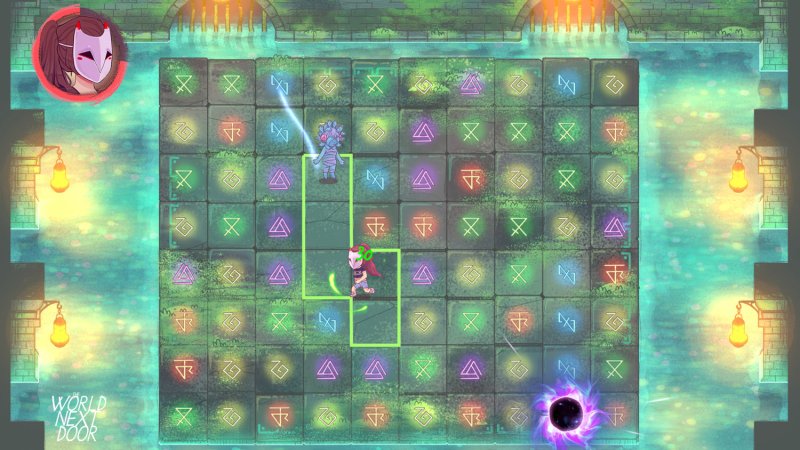 Above: What battles look like in The World Next Door.

Rose City has typically helped other studios with their games. For instance, it partnered with developer What Pumpkin Games on marketing its webcomic-inspired Hiveswap. The World Next Door is its first original project, and it’s also signed on with Viz to develop two more.

Viz Media chose The World Next Door from a raft of pitches from Rose City. Viz’s director of business development Eric Eberhardt says that it offered feedback on the concept as well, but for the most part, it tries to stay hands-off.

“When we’re dealing with a lot of the original anime or manga titles from Japan, obviously, we don’t have a lot of input into how those stories go. We pick the ones we think will work with our audience and try to market them and deliver them to fans here in the best way we can,” said Eberhardt. “Here, this allows us to get one step deeper into that process and say, OK, all of this stuff that we’ve learned from working with these titles and publishing and dealing with our audience, being very hands-on with them at shows over years and years, now we have the opportunity to push that back a bit to the creators, to help them craft something that will be a great fit.”

Eberhardt points to the characters as integral for long-lasting popularity, citing anime series like Naruto, Bleach, and One Piece. He sees a similar opportunity with The World Next Door, which has “a huge library of characters.” Warning says that Rose City approached the game from an art- and character-centric place.

“The original concept for this game we developed at an internal game jam that was very much focused on art rather than mechanics. We had a bunch of really high-level designs from previous years,” said Warning. “We brought in a ton of our artist friends to work with us on coming up with a big batch of concepts. We had something like 14 ideas for different games. And the original start to this game was very focused on characters. Our artist, Lord Gris, she was also bringing in characters from her past. Liza is a character that she came up with in high school.”

Developing as a studio and publisher 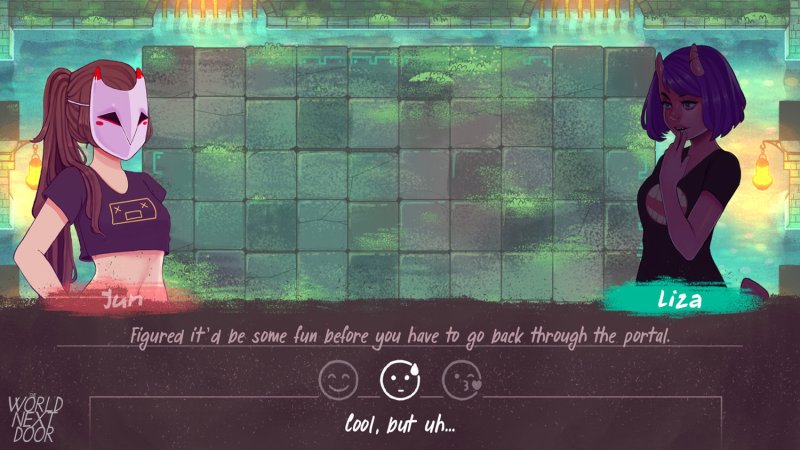 Above: In conversations, you choose your responses based on mood.

The next steps for the studio are smoothing out the mechanics and figuring out how the puzzle fighting fits in with the visual novel aspects. The developer also showed off a versus mode where two players will be able to face off on the battle board, both scrambling around and activating runes. Warning says that the Rose City team has looked toward Tetris Attack, Puzzle League, and Puyo Puyo Tetris as inspiration.

“It’s a narrative-focused game, but we wanted some action in here,” said Warning. “I really like Pyre, for example. There’s the big story, but as soon as you start the game, you can do versus mode. For me and my friends who played that game, that’s been a really cool, exciting part of it, playing against each other.”

Both Warning and Eberhardt say they want to let players in early on the development process and to keep people updated on how it’s going. Eberhardt says that Viz is still in the process of figuring out exactly what it wants to do as a publisher. He’s looking toward studios like Double Fine, which develops as well as publishes and hosts events like Day of the Devs where it showcases interesting and eclectic titles.

“I would say we’ll start with things that tend to look a bit more like anime and manga, tend to be a bit more limited in scope,” said Eberhardt. “Either indie or a game that’s mostly close to being finished and just needs launch marketing support. But then, we’ll begin working out from there to things that might look a bit less like anime and manga and might be a bit bigger investment. But we’re open to anything as long as that number one thing about character and narrative is part of it.”