Augmented and virtual reality startups raised over $3.6 billion from venture capitalists and corporates in the last 12 months to the end of Q1 2018, setting a new record. Over three-quarters of a billion dollars was invested in the first three months of this year alone.

A fundamental transition in the fundraising market towards AR from VR, as well as the very early-stage dynamics of mobile AR, is driving an acceleration of fundraising trends we anticipated at the start of the year. As expected in a transitional year, overall deal volumes declined slightly in the short-term as VCs and corporates look to medium-term mobile AR and long-term smartglasses growth. 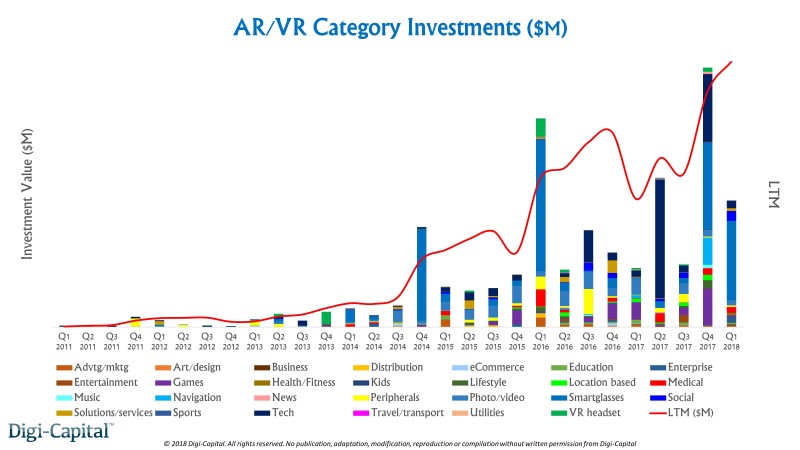 Above: AR/VR investments by category

The investment dollar figures for the last 12 months and first quarter are impressive, but digging beneath the surface reveals what is really going on. As has become more expected in early-stage tech markets, mega-rounds take the lion’s share of dollars invested. In the last 12 months Magic Leap raised nearly $1 billion ($502 million in Q4 2017 and $461 million in Q1 2018), Improbable raised $502 million, Niantic raised $200 million, and Unity did another big round.

While the five largest deals took half the money, smaller companies have been quietly augmenting their coffers. The pun is intentional, as the trend at the start of the year has been for investors to favor AR across many of the 28 AR/VR investment sectors. In contrast, VR startups have found the fundraising environment more challenging.

Steady as she goes 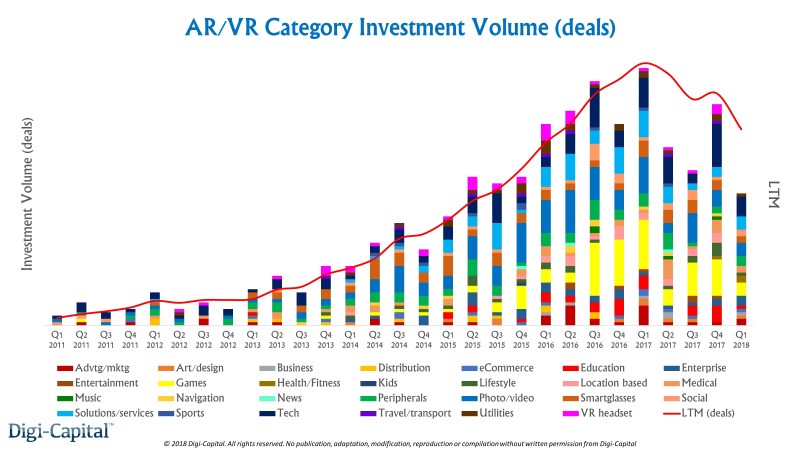 Above: AR/VR investment volume by category

While the dollars invested are one lens on the market, the number of rounds (not their dollar value) can tell us more about the level of early-stage AR/VR deal activity.

Total AR/VR deal volume (again number of deals, not dollar value) grew quarter-on-quarter to Q4 2017, despite some market perception to the contrary. AR/VR deal volume then declined quarter-on-quarter to Q1 2018. The specific reason for this numerical pattern was largely HTC ViveX, which had a big new accelerator batch at the end of last year (but hasn’t announced its next one yet). Removing this to normalize the data gives the true picture.

The normalized data shows Q1 2018 stabilized with the same number of deals as the previous quarter, and a handful of deals less than Q1 2017. However, the long-term investment trend of rolling 12 month deal volumes (again normalized) shows a roughly 10 percent decline through the two middle quarters of 2017. It also shows less than a 5 percent decline to the most recent quarter.

So what’s been driving VC and corporate investment?

It takes a village 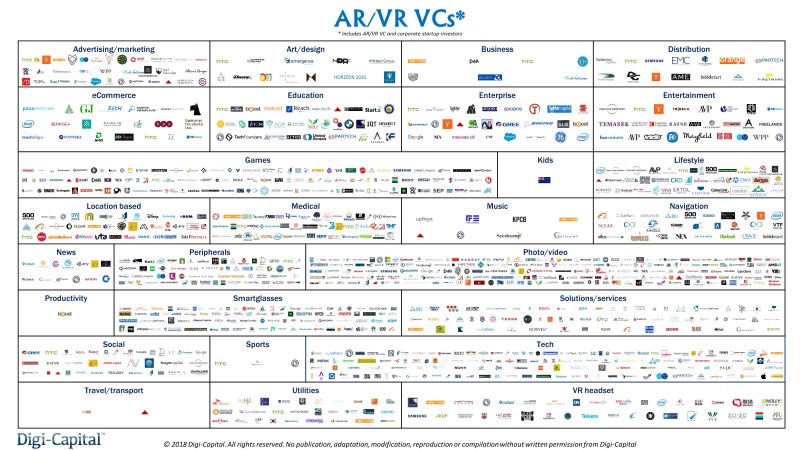 Above: VCs in AR and VR

We recently spoke with 30 leading VCs in Sand Hill Road and China about how they’re investing in AR/VR. In summary:

Early-stage AR/VR fundraising transformed in the last 12 months, and should continue to evolve with the market. While it could take time for breakout apps to emerge, potential AR/VR winners and the underlying platforms supporting them continue to raise solid rounds in Sand Hill Road and China. While nobody knows exactly what that future will look like, sometimes we recognize it when it walks through the door.

Tim Merel is managing director of AR/VR and games adviser Digi-Capital. You can find all the detailed analysis and data in Digi-Capital’s new 234 page Augmented/Virtual Reality Report and over 1,000 transaction Deals Database Q2 2018 here.