Supercell has recruited 36 pro esports organizations to field teams for its new Clash Royale League, which will crown the world’s top Clash Royale players in a series of tournaments with a $1 million prize pool.

This year, Supercell is offering players the chance to sign with one of the elite pro teams through an in-game event called the Clash Royale League Challenge. 25 million players competed to qualify for the CRL in 2018, and just under 7,000 players from 113 different countries made it to the next round. In the coming months, pro teams will create their rosters and prepare to compete for their spot in the World Finals event that will take place later this year.

“The great thing about this league is that part of team will have existing high-level pro players. And part is sourced from a worldwide combine of amateur players,” said Dan Fiden, president of esports organization Cloud9, in an interview with GamesBeat. “2017 was a really interesting year for the esports ecosystem. The reach is pretty amazing, and it signaled an era of much deeper engagement by game publishers and team organizations like Cloud9. The reach of mobile and the quality of Clash Royale as a game is really appealing to Cloud9.” 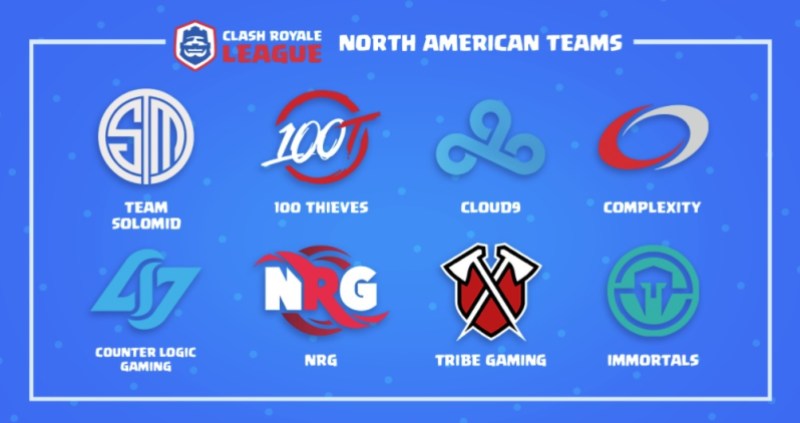 Above: North American teams for the Clash Royale League.

“We are incorporating a lot of the premier esports organizations from around the world,” said Tim Ebner, who oversees esports at Supercell, in an interview with GamesBeat. “In 2017, we noticed that many of the finalists were involved with esports team organizations. We want to bring the teams more deeply into the ecosystem as we move from an amateur to a pro league structure.”

In the game, players collect and upgrade dozens of cards featuring the Clash of Clans troops, spells and defenses Clash players know and love, as well as the Royales: Princes, Knights, Baby Dragons and more. Players must knock the enemy King and Princesses from their towers to defeat their opponents and win Trophies, Crowns and glory in the Arena. But most of the action is one human player versus one human player, though Supercell also introduced a two-versus-two mode. Ebner said that the competitive teams will have four to six players each. And in tournaments, three players from each team will play one-versus-one sessions in a match.

Two CRL regions, Mainland China and Asia (which includes all Asian countries other than China), will have a Spring Season which runs from March 23 to June 3 in China, and April 27 – July 14 in Asia. Other regions in the world will begin competing with the Fall Season in August, leading up to a World Finals event which will take place in Winter 2018.

Above: Cloud9 has 13 teams in 11 esports games, including Clash Royale.

Along with the CRL, a new tournament format will make the competitions more fun to watch, with an emphasis on finding the best team as opposed to individual player, Ebner said. Each of the CRL regions will be comprised of four to 12 teams. Top teams from each of the regions will advance to the World Finals.

Fiden said he believes that mobile esports will be a very large business opportunity, with a lot of investment still to come.

Last year, Supercell ran its own Crown Championship World Finals tournament. Ebner said the esports teams can expand the reach of Clash Royale esports beyond what Supercell can do itself.

“As a small company, we have a hard time building a massive esport,” Ebner said. “Some teams have signed existing players, but we will also require them to sign new players.”

Plexchat recently started its Path2Pro league for Clash Royale, hoping to surface amateur players as potential pros. That league is separate from Supercell’s Clash Royale League, but Ebner said he liked how Path2Pro is allowing more people to participate in tournaments for amateurs.

He also said that Supercell is thinking about how it can modify the game for better spectating and esports experiences. Players will be able to watch the matches played inside the game, and Supercell will use the game to promote interest in the league.

“This is one step of many, and we are very excited about it,” Ebner said. “With mobile, the scale of participation is huge, as we started with 25 million players.”