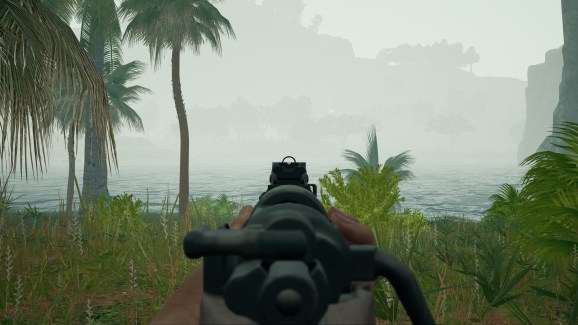 Fog in a match on Savage.

PlayerUnknown’s Battlegrounds no longer includes fog or rain matches on its stable servers. The PUBG Corporation dropped those options because a significant number of players would randomly load into a fog or rain match and then quit. But the studio is testing what could end up working as a solution to the quitting problem in the Experimental build of PUBG that is running right now with the new Savage map.

The PUBG Corporation started running tests of its smaller 16-square-kilometer map on Monday evening, and I’m having an excellent time with it. Savage is in such an early testing phase that it features unfinished textures on many of its locations, but you can see that the studio is already testing a number of ideas that could roll out into the stable version of PUBG in the future. One of those experimental concepts is a new weather system where conditions change over time. For example, a match may start with clear weather, but after a few minutes, you may run outside and notice that a thick fog has set in.

I experienced this changing weather with both fog and rain. I think they follow a similar pattern, which suggests to me that this isn’t a dynamic weather system where things are changing on the fly. Instead, I think PUBG Corp. is using weather to affect the flow of matches and to trick people to committing to play before they realize what kind of weather they are going to deal with.

The fog and rain seem to work like this: The match starts with a relatively clear sky. Savage is a tropical map that already looks and feels damp with humidity, so you always get the sense that it could start drizzling at any time. But the matches have never started with adverse weather. The fog slowly builds up over time at a rate that is imperceptible to the naked eye until the last third of a round. At that point, the fog lifts and you suddenly have unobstructed visibility. Rain hits similar beats. About a third of the way through the match, a light rain begins to fall and it turns into a heavier rain as time goes on. I believe it, too, clears as you get into the later game.

I think this is a brilliant system to bring fog and rain back into the stable version of PUBG. Some people may learn the early signs of the weather system, and they may quit. But I bet fewer people will leave than on the Erangel map, which started with rain or fog from the second you loaded into the countdown.

But this weather technology may serve an even more important purpose: pacing. Having clear weather in the first minutes of a match makes sense because that has the most action. You want everyone who drops at the abandoned resort to have full visibility and hearing awareness. But bringing in a thick fog or rain for the mid-match could maintain a high level of action for the exact opposite reason.

Once you clear out an area of enemies, fog and rain could give you a sense of security because you know it’ll hide you from long-range snipers or muffle your movements. This could get people moving around a lot more — or at least playing differently than they would during a clear-weather round. But even if the fog and rain come in, if they clear up for the final 10 to 20 survivors in a small circle, you suddenly (and horrifyingly) have all of your senses back. That should ensure that matches wrap up quickly as well.

I’m heading to Boston this weekend for PAX East, and I’m planning to talk with some PUBG Corporation developers. I’m going to ask them about this to see if it is something that could show up in stable build. For now, however, I’m excited to see the team come up with creative solutions to a problem like early quitters that also serves an effort to serve up a more constant stream of action.