The jarring experiences of launching, exiting, and switching VR apps within a separate 2D interface could become distant memories if Oasis by Admix and Somnium Space takes off. Inspired by the same-named VR hub in Ready Player One, Oasis promises to add “portals” to existing VR games and apps, enabling players to move seamlessly from one title to another without having to click through menus. And that’s just the start.

Admix describes Oasis as “a 3-dimensional version of the hyperlink,” shifting players through a “Metaverse” of different apps while “staying immersed in virtual reality.” A demonstration video published this week by the company shows a player walking into an elevator in the Somnium Space app, tapping an icon for the app High Fidelity, and then emerging on a street within the latter after a brief teleportation sequence. The companies say they accomplished the first “travel” over Oasis on March 28.

Initially, the Oasis links will just transition users from one title to another, but according to VRFocus, Admix’s CEO Samuel Huber’s long-term plan is to “solve inter-operability issues, such as identity conservation and currency conversion across apps.” In other words, your avatar’s customizations could remain intact across multiple virtual experiences, thanks to something akin to a persistent cookie. 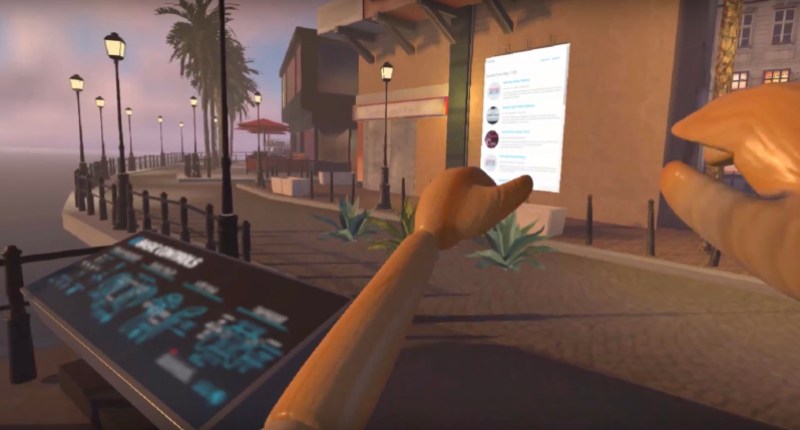 As technically challenging as that is, given the diversity of VR game engines today, the companies seem ready to take it on. Somnium Space already allows users to hold real estate within its virtual world, and Admix lets users monetize their properties by selling virtual ad spaces to real-world advertisers. So creating and tracking the use of virtual items with real monetary value isn’t outside their areas of expertise.

That said, there’s some irony in this use of the Oasis name. Ready Player One did feature avatars moving and carrying property between disparate virtual worlds. But the story’s villain was IOI, an ad company that wanted to control the Oasis, filling VR players’ eyeballs with as many ads as possible before inducing seizures. The whole point of the story was to keep the Oasis from being controlled by IOI and overrun by ads.

It remains to be seen whether Admix’s effort to create a VR Oasis will be successful, but it’s not the only company trying to use the Oasis name. A Canadian VR arcade firm just moved to trademark Oasis this past week, and between Cline, Spielberg, HTC, and earlier VR game developers, there may be other claims on the name as well.

Admix’s Oasis will be free for developers when it releases this quarter as an integration for Admix’s existing plugin, and will also be a standalone app co-developed by Somnium Space. Registration for Oasis access is available now at admix.in/oasis.