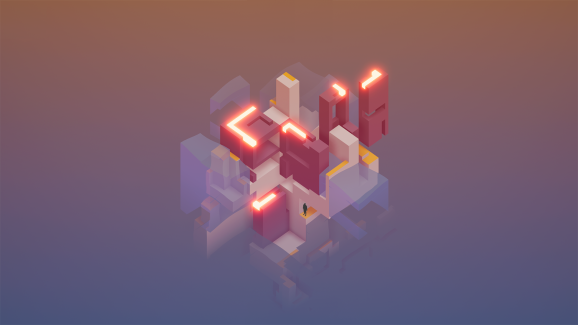 Indie developer Burgess Voshell’s No Place is all about loving and destroying architecture. It’s a puzzle game that’s slated for release later this year on PC and iOS devices.

No Place evokes the geometric, minimalist beauty of Ustwo Games’ Monument Valley, but its core mechanic is entirely different. To progress through the levels, players must destroy their environment, carving and shearing parts of the landscape away. It’s not an act that Voshell takes lightly.

“There’s an inherent devastation in your actions,” said Voshell in an email to GamesBeat. “I don’t want that to be diminished. I want to allude to and question the motives for that.”

The New York-based dev has a background in fine art and architecture, and he received an MFA in game design from the New York University Game Center. No Place isn’t his first game; he created other interactive experiences like DYG along with the mobile game Orbyss, a one-button action game featuring colorful geometries.

GamesBeat: Can you tell me more about yourself? How did you get into game development?

Burgess Voshell: I have a background in fine art and architecture. I was working for a small architecture firm in Tribeca when I began making my first digital game. I loved that architecture was heavily interdisciplinary and games seemed even more so. I like learning new things and dealing with new problems.

As I started to expose myself to game development and design, I became really engrossed by the process and the level of control and authorship I could have in the work. For me, at the time it was contrasting a more rigid and less hands-on experience of designing homes for wealthy New Yorkers. I became consumed by the work of game design. That’s all I did every night and every weekend. This whole experience and how energizing it was convinced me that I needed to commit more fully to game development. Though the transition was a bit painful, it truly felt right.

GamesBeat: What was the inspiration for the game?

Voshell: No Place started with a curiosity about what it would be like to interact with an environment at a vastly different time scale. I wanted every frame to represent something like 100 years. Games afford you a unique ability to test experiences that differ substantially from what is normal to us. Interacting with time like this was one that interested me and I didn’t think had been addressed in the way I was imagining it.

This curiosity lead to an uncomfortable amount of prototypes which were all absolute failures. Many of them were about trying to build or navigate while the world and your constructions were being weathered away by rapidly passing time. It quickly became clear that this chaotic decay was just purely frustrating. It took me a long time to learn that the destruction and severe environmental manipulation would have to be productive and controllable.

That realization was kind of a break-through moment in the project. I then shifted to test designs worked towards these constraints. The final direction for No Place arose out of an interest in seeing massive sections being cut out of a landscape or built structure, like the work of Gordon Matta-Clark, who was famous for cutting huge sections through buildings. It came from my history with architecture and the way we represent and think about buildings. I wanted to bring a sense of that tradition to a game, but in a way that also destroyed it through the chaotic reconfiguration that is central to No Place.

GamesBeat: Can you tell me more about No Place’s story?

Voshell: The story is still being worked on and I expect that it will be done with a rather light touch. Though I can say that a major part of it which I hope to convey has to do with the tension between the mysterious desire to create these closed shapes and the necessary destruction that this goal causes. There’s an inherent devastation in your actions. I don’t want that to be diminished. I want to allude to and question the motives for that.

GamesBeat: How long have you been working on the game and how has it changed in that time?

Voshell: I’ve been working on No Place for about a year now. The biggest changes to the game since I settled on its current direction have been mostly surrounding how you interact with it. It’s taken a lot of tweaking and testing to get this interaction to be as clear and simple as possible. Sometimes that has even meant changing some details about how the main mechanic works. It’s a bit shocking to look back at how complicated the game was to play in its earlier stages.

Voshell: By far the two biggest areas of difficulty are with technical implementation and how the game’s mechanics are interacted with and taught to the player. Since you can cut into any section of the environment, I have to generate mesh whenever this happens to render the volume revealed by the cut. Getting this to work seamlessly, especially on mobile, has been a huge challenge.

In terms of the player’s understanding of the game, conceptually a typical move in No Place is kind of complicated. You’re trying to manipulate something and make selections in three dimensions and when you delete something you have to do it in a particular direction. In many ways it’s similar to operating a professional CAD program, but I had to make it simple and approachable.

Also, I wanted it to work with a single finger on mobile. The earliest versions of the control scheme felt all too much like a CAD program with different actions mapped to all possible mouse buttons. Drastically simplifying this and making sure that the early levels progress smoothly to introduce the player to this atypical control scheme and mechanic required a huge amount of effort and playtesting.

GamesBeat: What are the next steps for the project?

Voshell: There is a fundamental concept of the project, which was actually a big part of the initial image in my head of where this game was going and I haven’t yet been able to really work towards that. I don’t want to mention what that is except to say it has to do with the environment. A less vague answer is that that I need to make more levels, work on sound and music among many, many, many other things.