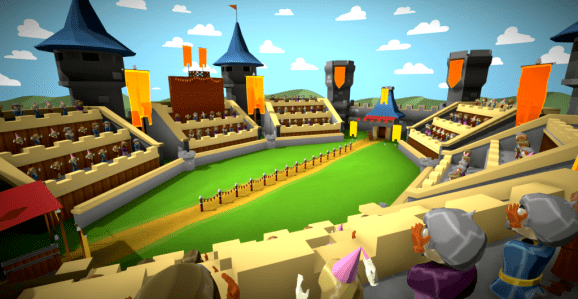 One of my favorite movies is A Knight’s Tale, a highly underrated story about a medieval peasant who cons his way to knighthood winning jousting competitions against the kingdom’s most prolific knights. It stars Heath Ledger, and it was my first real introduction to the actor while growing up.

Now if you took that concept, made it a whimsical, colorful world that pops with personality, you’d have something along the lines of Jousting Time.

Funny enough, it’s not the first jousting game we’ve seen in VR. Way back when Valiant hit the scene with a far more realistic take on the concept, but Jousting Time is going for more of a Job Simulator vibe than anything else, which fits for the developers, Trebuchet. Previously, they released a clever puzzle game called Prison Boss.

In Jousting Time players gallop down their lane, holding a knight’s lance, with the sole intent of violently impaling (or even decapitating) their opponent. In practice though, what plays out feels and looks more like a Saturday morning cartoon than one of the most deadly things a medieval warrior can do with their spare time. Weapon choice will be crucial since they all function very differently in action.

Jousting Time was announced this week for PAX East and is currently running a Kickstarter campaign for funding. We haven’t tried the game ourselves yet, but given the team’s track record of actually releasing finished VR games we’d consider it a safe bet that the game will be completed if they reach their funding goal.

You can find out more about the game on the Kickstarter page. Trebuchet is trying to raise at least $23,272 by May 2.