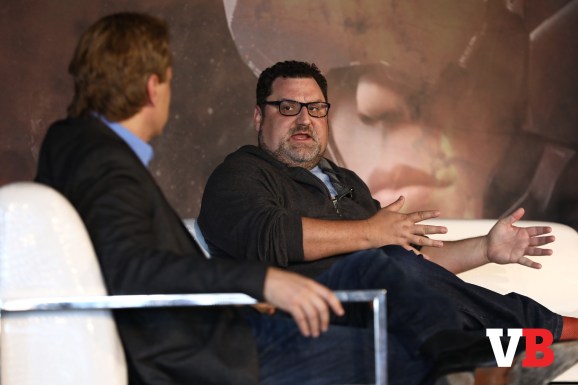 NBCUniversal is interested in creating virtual reality content, but Chris Heatherly, the company’s gaming boss, gave one reason that isn’t a viable strategy yet during a panel today at the GamesBeat Summit in Mill Valley, California.

“It isn’t a business yet,” said Heatherly. “There’s a lot of negativity around VR. I happen to be bullish about the platform, but I think the technology was far from prime time for most users. So the hype bubble got out of control.”

While home VR isn’t a business yet, Heatherly noted that one aspect of virtual reality has the attention of NBCUniversal, and that’s location-based VR. He pointed to The Void, which is a company that makes attractions that combine warehouse-style locales, proprietary head-mounted displays, and wearable computer backpacks to put people inside immersive brand experiences. The Void started with Ghostbusters, but it is running a Star Wars game right now that is in its installations near Disneyland, Disney World, and cities around the world.

In The Void’s Star Wars: Secrets of the Empire, a group of friends can put on their VR headsets and backpacks and enter a galaxy far, far away at the same time. These groups can see and interact with one another, but they can also interact with the world because The Void syncs up the objects in its games with similar objects in the real world. If you see a digital table, you can lean against it. If you see a gun, you can pick it up and hold it.

It’s impressive use of the VR technology that isn’t feasible for the home, and that’s what Heatherly cares about right now.

“We’re really focused on location-based VR right now,” said Heatherly. “If you look at how The Void has done with Star Wars or what Dreamscape has done with Alien Zoon — all of the location VR things that have opened have completely sold out.”

FoxNext Games studio president Aaron Loeb added to that during the GamesBeat panel.

“They will add shows, and they sell out even more,” said Loeb. “They cannot create enough inventory.”

That sell-out potential for location-based VR is what NBCUniversal and FoxNext like because it shows that The Void and its competitor Dreamscape have theme-park-like draw with audiences. And that is a new way that companies can leverage their properties without having to make long-term commitments to a theme-park ride that will last for 50 years. That saves money and time by eliminating much of the physical elements of a themed attraction, and that is VR living up to its promise.

Corrected at noon on April 12: I originally stated that The Void uses HTC Vive headsets. That is not accurate. The company uses its own proprietary head-mounted displays.