Chinese gamers are pretty hardcore, and the most hardcore are the PC gamers who play an average of 42 hours a week, according to a survey by market researcher Niko Partners and partner Quantic Foundry. The survey captures the characteristics of Chinese gamers and who they really are, said Lisa Cosmas Hanson, general manager of Niko Partners, in an interview with GamesBeat.

In the chart with the blue bars below, you can how Chinese gamers see themselves. Seventy-six percent of them view “competition” as important, and 77.2 percent value “completion,” like in finishing all the levels in a game. By contrast, only 38.5 percent view a story in a game as important and 36.8 percent view design as important.

“We’re doing further studies on how this differs from Western gamers, but I believe these characteristics make Chinese gamers unique,” Cosmas Hanson said.

The report brings together Niko’s expertise built on 16 years of analysis in the Asia games market with study partner Quantic Foundry’s Gamer Motivation Model and data science methods to produce a first-of- its-kind, in-depth study into the motivations and behaviors of Chinese gamers.

“Understanding how gaming preferences, motivations, and demographic variables group together enables targeting those segments with more precise marketing messages and acquisition channels,” said Cosmas Hanson. “Why these gamers play is as important as what they play and how much, and is critical to understanding them as gamers — and as consumers.” 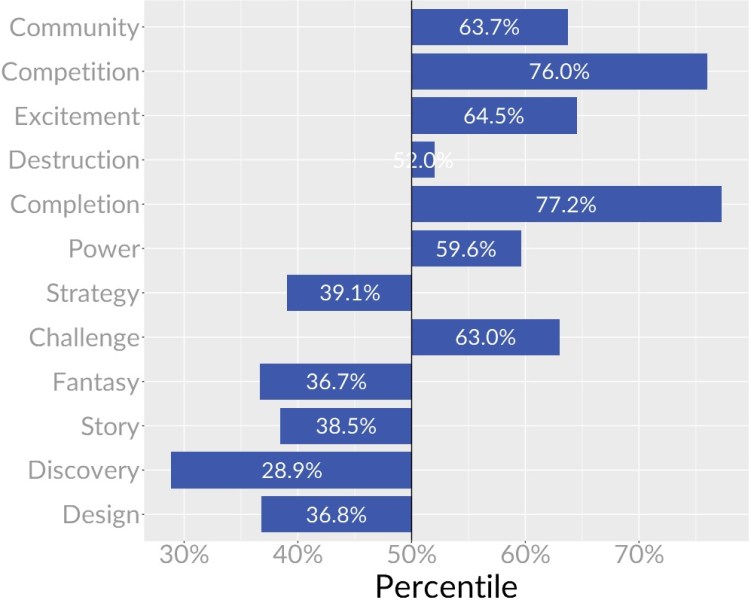 Above: Niko Partners: The line down the middle represents the average gamer. In general, Chinese gamers overall score highest for competition and community.

“Pairing gaming motivations with digital consumption preferences provides a unique lens into what different kinds of gamers want and how to reach them,” said Nick Yee, cofounder of Quantic Foundry, in a statement. “Fine-tuning player targeting is all the more important in the increasingly competitive gaming landscape.”

By contrast, casual gamers average 12 hours per week, across platforms but with the majority of their time spent on mobile, playing casual games. A group dubbed “casual demolitionists” play an average of 16.5 hours a week. They love competition and excitement, but prefer less complex gameplay.

The survey identified another group as super consumers. They have the highest income of all segments, and are voracious digital consumers and early adopters. They rack up more than 40 hours of gaming, across all platforms.

“We see that competition is one of their primary motivators,” Cosmas Hanson said. “It makes sense that esports is so hot there. It will not be a flash in the pan. It will continue to grow.” 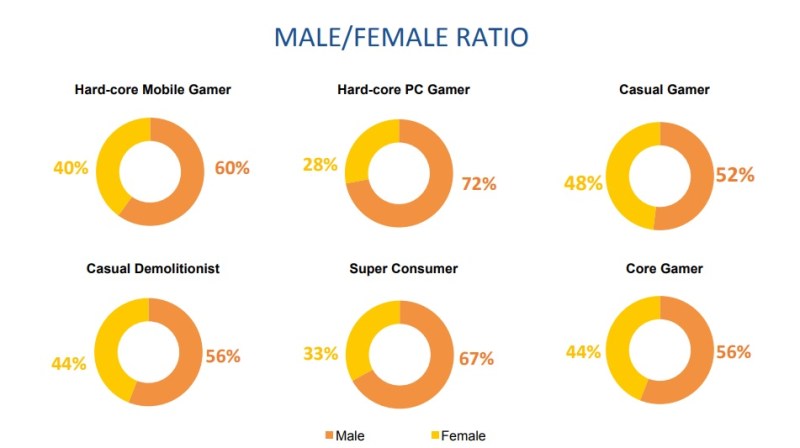 Above: Niko Partners has stats on gamers in China. Chinese female gamers across all segments are playing Honor of Kings.

The largest segment is core gamers, who are true gaming enthusiasts. They average 18 hours of play per week, and also like to talk about and interact with gaming-related content.

The study also shows the gaming, movie, live streaming, online shopping and other behaviors of each of the segments. Almost all gamers in China spend significant time playing games on their smartphones, even hardcore PC gamers.

And the most popular games for all gamers in China, regardless of segment are League of Legends on PC and Honor of Kings on mobile. The majority of all segments attend movies in the theater either opening day or week of release. Attending movies at the movie theater is vastly more popular than watching movies at home.

“We delved into what games they like, their tendencies, and the things that marketers and developers can target,” Cosmas Hanson said. “We also know what they are doing with the rest of their lives. Gaming is life. Everyone is playing on every platform.”