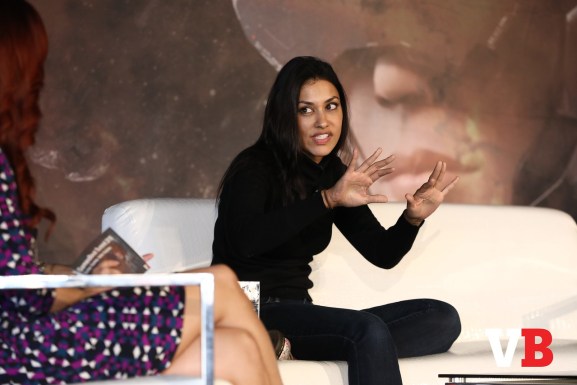 Janina Gavankar makes an impassioned plea about making games with your heart, not data.

Star Wars: Battlefront II actress Janina Gavankar has a warning for both triple-A game studios and Hollywood: “Lean in or die off.”

She took the stage at the GamesBeat Summit in Mill Valley, California, today for an impassioned speech about the genius and creativity of indie games. In a fireside chat with What’s Good Games producer and writer Andrea Rene, Gavankar espoused a love for independent creators and discussed some of her new projects.

Gavankar is well known for being not only a creator but a fan, and this is a huge benefit for her newest secret project. She didn’t reveal too much, except that it’s transmedia (which is the intersection of more than one form of media, such a movie launching with a game, a comic book).  In her opinion, transmedia is often a term that’s tossed around too much and created by those who don’t even use new technologies like virtual reality headsets or augmented reality. They simply port the content into various mediums.

“Stop pretending you know how to create content for something you don’t even use,” Gavankar said archly.

So she decided to create her own. And the major difference is that she actually uses the new platforms that she wants to bring her game to. She has been baking in transmedia potential from the beginning.

“In our time developing the world, we’re thinking about how we can make a VR experience, an AR experience, an interactive experience in any way, working in branching dialogue,” said Gavankar. “These things are really important if you want to keep creating and keep bridging the gaps between these mediums.”

And the people she thinks are going to really bridge these gaps and bring new experiences are independent creators — specifically “triple-I” developers who are leaving triple-A studios. Starting several years ago, the industry’s seen a trickle of big-name talent from companies like Ubisoft and Massive leave the fold and start their own studios. Gavankar is looking forward to more personalized gaming experiences from these smaller companies, which have more freedom to experiment.

“If you don’t have something that hits gamers’ hearts, you’re not going to reach them,” said Gavankar.

She urges those on the business development side of the industry to leave data behind to try new things. It’s part of the reason she started The Forum, an invite-only message board that’s only for folks in the game industry. She intends for it to be a safe space where creators and developers from everywhere can share ideas and discuss game design.

Why all this advocacy? Because Gavankar views games and interactive mediums as the future of entertainment, something that could completely push Hollywood aside. It only has to embrace its creative destiny. And it can’t do that if it keeps pushing the same stagnant franchises instead of making new IP.

“I have triple-A fatigue, and I have felt like this for a while,” said Gavankar. “Why am I playing games that I could’ve played in 2007 except with better graphics?”

“You can’t just follow that data forever,” she added about fostering creativity in the games industry. “Somebody had to find Spielberg and say, OK, kid go ahead. And it wasn’t based on data. It was because he was a genius.”