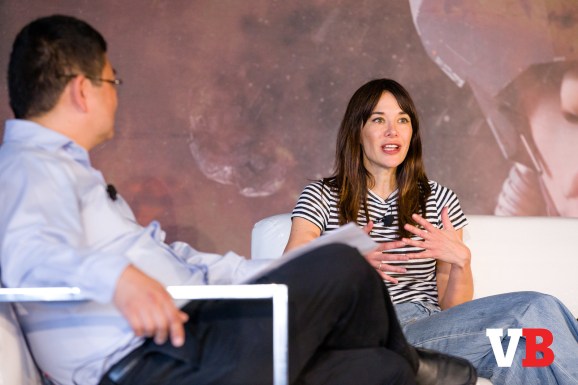 Electronic Arts has a couple of new properties in the works, such as Anthem from BioWare. Another project is in production at EA Motive, which is the studio that industry luminary Jade Raymond is overseeing. During a fireside chat at the GamesBeat Summit in Mill Valley, California yesterday, Raymond explained that making something new for a massive publisher is shifting to focus on the ways people feel ownership over a game. She suggested that for games to last longer — and potentially take advantage of live-service revenues — games need to consider their players as stakeholders.

Raymond is best known for overseeing the team that created Assassin’s Creed at Ubisoft. She described how her strategy has changed since then when it comes to the new Motive game.

“We’re thinking a lot about how we want to approach this, and is it different from how things were 12 years ago — or 14 years ago when we started working on Assassin’s Creed with that first team,” said Raymond. “We were thinking about it then with Assassin’s Creed and how we can create a brand where there’s the potential for it to evolve and live on. We put in place an infrastructure for new, professional teams to take the brand on and make it their own. We’ve seen that work with Assassin’s Creed.”

But making an iteration-friendly property that can spawn endless sequels is not as valuable as it once was. And Raymond knows that it was gamers who have led the publishers on this.

“When you look at what players want and what they call ‘quality,’ it has changed tremendously in the last two years,” she said. “You know that everyone is talking about PUBG and Fortnite, but we used to think that triple-A quality meant how many features, how many modes, how many hours of gameplay, and how many maps. Now, players are valuing the social connection, their impact on the game world, and their emergent story. And all of that can happen in one map and one mode with very few features..”

To meet gamers where they are, developers and publishers are changing their own ideas on what they should work on. So making that transmedia-friendly brand like Assassin’s Creed is fading away, and now someone like Raymond is more concerned with making something that players can feel ownership over.

“Now, it’s about how do you create a brand that can be owned by the fans and players,” said Raymond. “It’s not even just owned by players and fans but the whole ecosystem of people involved in games these days: the broadcaster, the content creator, and the modder. It’s not just the people who create the game and the people who play the game.”

She said that it’s important to think about how a game can live on through all of those stakeholders even if they don’t necessarily own a financial stake in the game or Electronic Arts. This brings to mind games like Destiny, The Elder Scrolls V: Skyrim, and Fortnite, which all owe parts of their success to people who run Discords, make mods, or stream on video platforms. Those games work because they enable people to come back to them again and again, which provides opportunity for people to associate their identity with them among their friends or with an audience on Twitch or YouTube.

Raymond didn’t provide many other details about Motive’s game, but we now at least have an understanding of some of the thinking that is going into its creation.