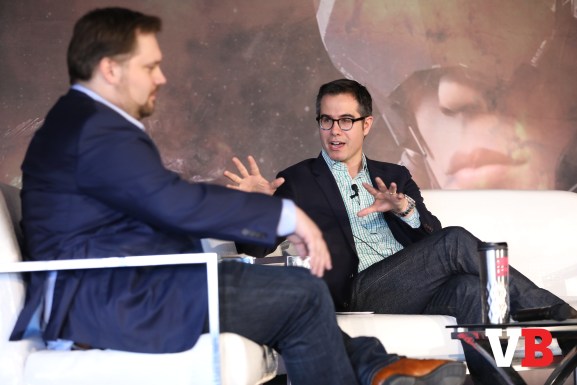 Not every developer is willing to commit to creating an entire game based on licensed IP, but Jam City president and chief operating officer Josh Yguado thinks every developer should at least consider incorporating branded events. “As a game developer, it’s something everyone should think about,” he said onstage at today at the GamesBeat Summit in Mill Valley, California, “because I think there’s really interesting ways that are pretty untapped right now to just do great two-week, three-week, month-long events that fans really like.”

Yguado sat down with Creative Artists Agency head of mobile Michael Blank for a fireside chat about how shorter in-game promotional opportunities can give developers a chance to experiment with what it’s like to partner with celebrities and franchises in an authentic way. And authenticity is a concept that comes back over and over again.

Blank works with a lot of celebrities who have found their way into games — like Gordon Ramsay’s partnership with Glu Mobile, or Demi Lovato’s interactive adventure with Pocket Gems. He says that teaming up with a celebrity is very much different from turning a franchise into a game. A movie or TV franchise might yield several games at once, but a celebrity wants to be involved and cultivate a gaming experience that speaks to their fans. That means getting really hands-on.

But that doesn’t mean franchises don’t have that direct personal relationship with its audience. In December, Jam City announced that Warner Bros. Interactive Entertainment had licensed it to take its enormously popular Harry Potter franchise to mobile screens. Harry Potter: Hogwarts Mystery is coming out in two weeks, and the studio has seen the biggest fan response to a game in its history.

“How the game was set up also gave us a lot of flexibility. It’s set up before the books and films so we had a bit of a blank slate, we had total freedom to really tell a story and take some chances in terms of what the game was providing,” said Yguado. “It’s a franchise that has the perfect mix of freedom and depth, and again, this fanbase is like no other game we’ve ever seen. Leading up to this launch we’ve got more preregisters, more fan videos by multiples than we’ve ever had for any game before. That speaks to the strength of the franchise.”

Yguado and Blank are clearly advocating for developers to consider brand partnerships — whether that’s a limited-time event or a full-on game — but they also warn against some of the pitfalls. Yguado says that Jam City has about a “50/50” mix of in-house original IP and licensed IP in its portfolio. And he also warns against taking a chance on “unproven IP,” because those only work out about half the time and can be unpredictable.

Branded partnerships can be a powerful tool for developers, but it’s something that must be wielded carefully.