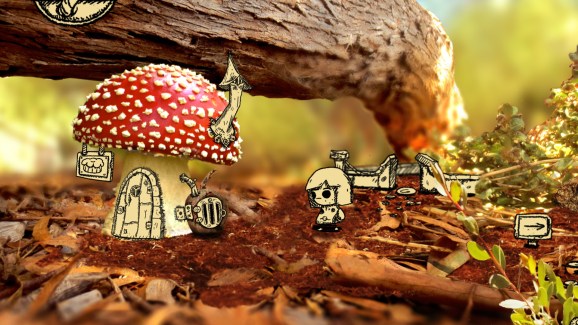 Tala is a cozy puzzle adventure on the miniature scale. Indie developer Matthew Petrak combines photography and hand-drawn animation to create a tiny world where a toadstool becomes a home and the forests of his native Australia transform into fantasy realm populated with small creatures and travelers. A free demo is available on his Itch.io page for PC.

Tala is the eponymous forest spirit who decides to voyage into the Deep Woods to rescue her friend. In order to do so, she’ll have to solve puzzles and help the townsfolk out in her little village to prepare for the journey.

The Melbourne-based developer has worked on other games before, like Gritfish’s Mallow Drops, but he’s primarily been the artist. This is the first full game he’s worked on solo. For inspiration, he drew from his love of nature and the little details he notices when he’s out hiking in the woods. After he takes photos of something that’s caught his attention, he draws over it, creating little characters that look like they’re paper cutouts.

Tala doesn’t have any dialogue. Its characters communicate in little mumbled noises and pictures in thought bubbles. This lends itself nicely to the idea that you’re visiting a mysterious world underfoot — one that has its own way of existence.

Petrak ran a crowdfunding campaign on Kickstarter for Tala that failed to meet its goal. But he’s not giving up. He plans on launching another one later this year.

“Even though the campaign failed, I learned a whole lot that can be applied in the future. More importantly, the support and dedication I’ve seen from backers has been astonishing — it warms my cynical heart,” said Petrak in an email to GamesBeat. “At the very least, I know that a relaunch is going to have a stronger start since it’s starting to find its audience!”

Matthew Petrak: I’m Matthew. I’m an freelance artist and animator based in Melbourne, Australia, and I’m creating an adventure game called Tala that combines two things that I love: nature and animation. It started off as a hobby project, something that I’d hack away at for fun whenever I had a spare hour or so. But as I showed it off more, people really became attached to the world that I had been building, so I started to take some steps into making it into a fully fledged game.

GamesBeat: What was it like working on games like Mallow Drops and Beard and how are you applying that experience to Tala?

Petrak: Tala is the first full game that I’ve set out to develop. A lot of it is new to me, so it has been a fantastic learning experience. The fact that game development tools are becoming more accessible to people has been a godsend — Tala wouldn’t exist without the Unity engine and a plugin for it called Adventure Creator. It lets me focus on making the game without having the programming experience that you used to need to make games. It’s been wonderful.

My previous experiences with game jams and contract work for games has been a godsend, if only for the technical knowledge that I learned from it. Tala is an asset-heavy game with a lot of frames of animation — so learning how to deal with that let me lay out the groundwork of Tala pretty quickly.

GamesBeat: What’s the inspiration for Tala?

Petrak: I’ve always thought that one of the biggest strengths in video games is that it’s an interactive, largely visual medium, and that it’s great for creating worlds to escape to — and you rarely see games pushing for a strong art direction. Initially, the idea of Tala wasn’t even going to be a game! It started off with me with some stock photography in Photoshop looking to kill an hour and I just started to draw over it, thinking that it could make for an interesting short animation.

That style slowly got refined over time, and at some point I realized that it would be extremely powerful and evocative to actually be able to explore a world like that at your own pace — something that games are great at. I think that if the Samorost games didn’t exist, I would never had even thought that it could work as an art style for a game. Those games have been a huge inspiration to me personally and I adore them greatly.

Petrak: At its core, Tala’s story is about finding home and your place in the world. Home as a feeling; somewhere that you feel safe — and not as much as a physical location. You’re set off into the world at the deep end after leaving the town that you grew up in and never ventured far from, seeking out to find somebody who went missing in the woods.

It’s a relatively story-light game, since all dialogue is told through little thought bubbles and fully animated cutscenes are far too complex to have to deal with as a solo developer who wants to actually release the game. [Laughs.]

Even though it’s story-light, there’s still a few key plot points that I want to hit — and they’re pretty big moments that drive you to try and figure out what home means and feels like.

GamesBeat: What’s been the main challenges in developing the game?

Petrak: Surprisingly, getting the art style feel right was easier than I expected, and getting a basic prototype build of it only took a weekend or so. From there, it was just refining the style.

Puzzle design can be a challenge in general, but when you don’t have dialogue to give hints, you have to be very deliberate in what you show. I have to walk a fine line in using the little thought bubble animations — show too little and nobody has any idea what’s going on, show too much and you’re not really setting up puzzles. Getting each area to feel right and consistent is harder than I thought it would be — that’s 90 percent through the colour grading, so even if I’ve had an area in-engine for a long time, I’ll still go back and make small colour grading adjustments until it starts to feel less jarring moving between scenes.

Figuring out the music direction was tough — I knew from the get-go that I didn’t want to default to orchestral stuff, or even music akin to what’s in the Samorost game; having a unique soundscape is just as important to the project as the visual style. Deciding that finger-style guitar-work would be perfect for the music came to me by chance.

I was walking through a little nature path listening to music on shuffle, and Andy McKee’s “Heather’s Song” started to play, and things just mentally clicked together and it felt right. Finger-style guitar is about taking a simple instrument and approaching it in a different way, much in the way that I’ve taken animation and photography as tools and mashed them together to create this really cool and weird thing.

GamesBeat: How did you use photography to create Tala’s world? Is it challenging to make it seem like a fantasy setting when it’s based on real places?

Petrak: Using photography as a base was actually a way for me to get out of doing background design, finding cool logs and rocks is actually really inspiring. If I find something that looks interesting and could double as a building of sorts, I’ll just stop what I’m doing and take a whole bunch of photos, and that dictates what’s going to be in the world. It’s almost like I’m discovering the world as I develop the game. It’s a super cool experience.

I love being out in nature, and there’s a great little group game devs here in Melbourne and we have a little hiking club. Every now and then we’ll take a break from staring at our computers and get out to where the air is fresh and it’s wonderful. I get to use those trips to be productive as well as escaping from the world for a bit!

Making a fantasy setting out of real photos has been easier than I thought it would be. I get to be inspired by all these little things and make a world out of it — it’s like keeping the magic of your imagination alive. Basing it in a “real world” actually helps make the fantastical elements feel grounded and alive. To me, it’s a world that simply goes unseen by humans.