As traditional entertainment struggles to find its place in a new digital world, video games prosper and have evolved into a mainstream form of entertainment. Joost van Dreunen, CEO of analyst firm SuperData Research, talked the rise of games in the context of the larger media and entertainment industry growth in a talk at GamesBeat Summit 2018. While games are growing, they’re also changing and remain unpredictable as well.

While gaming has grown, traditional industries like toys have faltered, van Dreunen said. The toy business is hobbled by long production, development, and marketing cycles, with massive spending on inventory. Toy makers have been unable to jump on hot trends, such as the recent craze for fidget spinners thanks to viral growth on social media.

The death of the Toys ‘R Us retail chain is “what happens when a company doesn’t adapt to changes in the ecosystem,” van Dreunen said. 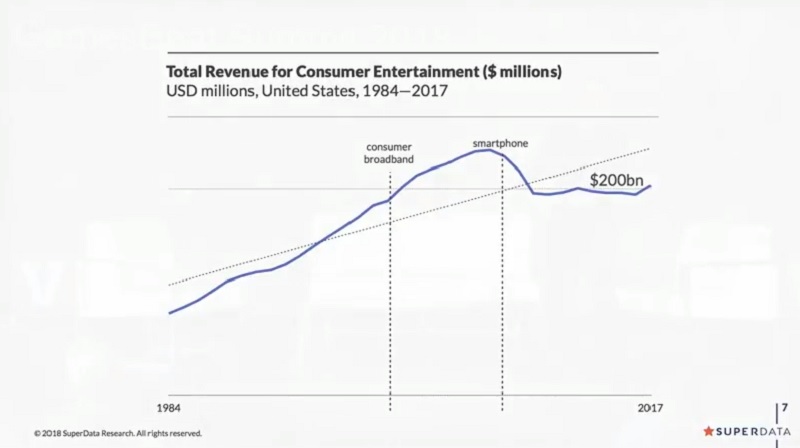 Above: Overall consumer entertainment has grown over the decades.

About $200 billion is spent a year on entertainment, and it has been going up continuously since 1984.

Music took a dive during the digital media era, but it has started coming back as concerts and Spotify ads gain popularity. As the smaller categories falter, consolidation of media into massive companies with economies of scale has been the driving trend in the slow-growth industries, van Dreunen said. Business-model innovation and increased agility matter a lot in the current industry climate, he said.

Pokémon Go’s rapid growth was an example of the new kind of media property since it grew rapidly through social media and scaled up to huge numbers thanks to the near ubiquity of smartphones. The fact that it took off on a relatively open platform with low barriers to entry was no accident, he said. 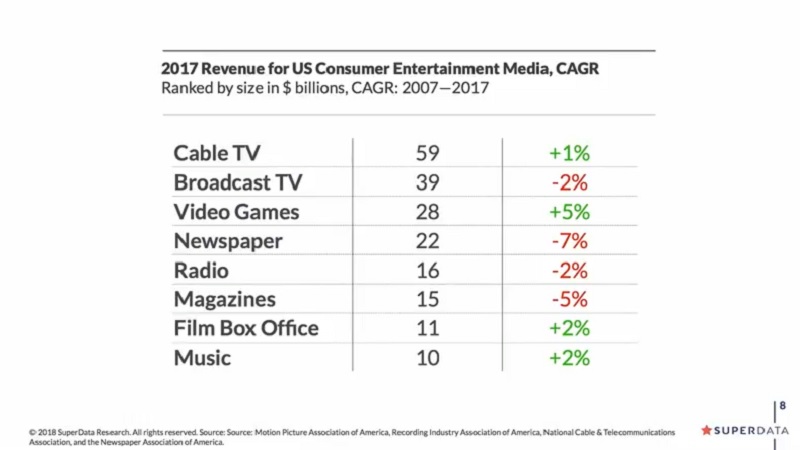 Above: The winners and the losers in entertainment media.

“By not making things too difficult for creatives, you can really extend the life cycle of a lot of products on both the supply and demand side,” he said.

The console model will likely continue, even though it is a closed platform. But the growth of digital will continue across more open platforms, such as Steam on the PC, as well, van Dreunen said.

“We have to let go of some of the ideas we have had in the past,” like focusing on the genius of one person rather than a full team or failing to balance both business sense and creativity, van Dreunen said.