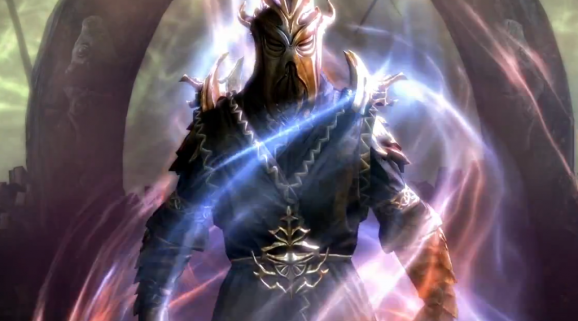 The Elder Scrolls V: Skyrim VR just came out a little over a week ago for PC (our full review) and one dedicated player (elliotttate on Reddit) has already used it to lose 10 pounds. In case this isn’t obvious: extremely rapid weight loss.

The player accomplished this by enforcing rules upon himself that both increase the game’s immersion and force him to be as mobile and active as possible. Skyrim VR on PC already supports motion controllers and standing up while you play, but there’s currently a bug that restrict’s the player’s hitbox in place even if you physically move around your room. One of his rules was to ignore that bug and attempt to physical dodge arrows and spells just by moving around his environment.

He also read all of his character’s dialogue out loud and never rode a horse or fast-traveled at all while playing. That’s right: he ran everywhere.

By simply walking, jogging, and sprinting in place at whatever speed his character was moving, he was able to not only simulate the feeling that he was actually there, but was able to work up quite a sweat as well.

“In my room-scale room, I laid down a couple yoga mats, strapped on my running shoes, blasted a fan on me at full blast and learned to run in place to the exact speed of the game movement speed,” he writes. “I also learned to sprint really fast at the exact speed of the sprint that uses stamina in the game (which you don’t realize is fast until you have to physically run that speed). At first, I just chose a direction and decided to do a 30 minute run. With all the mods loaded, the beauty of running through the cobblestone streets at night, with lanterns swaying to the side and a thousand stars in the sky was purely magical – breath taking!”

After that warm-up run he starts to do quests, talks to NPCs, and engages in some of the most immersive roleplay possible. While most of his tricks are artificial limitations on the game or self-enforced measures that could easily be done without the game, when you combine them with the visual feedback of Skyrim VR’s game world, it feels much more effective.

While it would be no doubt unhealthy to sustain that level of weight loss, assuming he’s led a primarily sedentary lifestyle with minimal to no exercise previously, it’s likely just water weight and his loss will level off soon.

Above: Making up for a lack of in-game mods on PSVR with real-world mods.

Previously we wrote about a man that used a treadmill to simulate the feeling of walking across the entire map on Skyrim VR for PSVR, so this takes that idea to grand new heights. We’ve also covered other VR users that have lost upwards of 50 pounds using VR.

The results are quite promising, especially when you consider that Skyrim VR, a game that can be so immersive and addicted that people often neglect physical fitness to play it more traditionally, is directly responsible for this man’s weight loss. VR really is a game changer.

You can read more about elliottate’s endeavors in the Reddit thread.