When you think a video game involving archaeology, you might think of Lara Croft zip-lining from a snowbank and headshotting a couple of dudes who are after a magical artifact. But Inkle’s Heaven’s Vault takes a different approach, landing you on an alien planet where you must decipher a mysterious language and unravel the secrets of a lost civilization. The adventure game is due out later this year on PC and PlayStation 4.

Heaven’s Vault stars archaeologist Aliya Elasra, who’s investigating a series of alien moons called the Nebula. Along with a robot companion known as Six, she explores and interprets the hieroglyphics that she finds. It’s a narrative adventure set in the distant future with a branching storyline that incorporates the players’ translations and decisions into what happens next.

Inkle cofounder Jon Ingold says they hit on archaeology as a theme early on. They did a lot of research, including on how looters were stealing historical artifacts in Egypt during the Arab Spring. The studio began thinking about the idea of whether or not archaeology itself is just “colonial imperialism” and theft. This also sparked an idea of how politics can get involved in the study of ancient culture, particularly when the government might dispute over who owns the land.

“So that got us on to science fiction archaeology, because we can have all the good stuff about archaeology and none of the problematic stuff about archaeology,” said Ingold in an interview with GamesBeat. “Just enjoy discovering the past. What we’ve ended up with is kind of a detective game. An archaeologist is kind of a detective: going to places, making up theories, working out what’s going on. But with this nice layer of everything happening so long ago that you can never really know if you’re right.”

When you stumble upon a gated courtyard, you might decide it’s a graveyard — or a garden. That assumption carries through to the way Aliya views everything else she discovers in that location. When I tried out the demo at last month’s Game Developers Conference in San Francisco, I was surprised by how these interpretations also affected the way I viewed the game as a player. Once I’d locked in a meaning for a symbol, I wanted to build everything else I discovered around that. Changing my mind about what one glyph meant would challenge all my previous assumptions.

Right answers, but no right playthrough 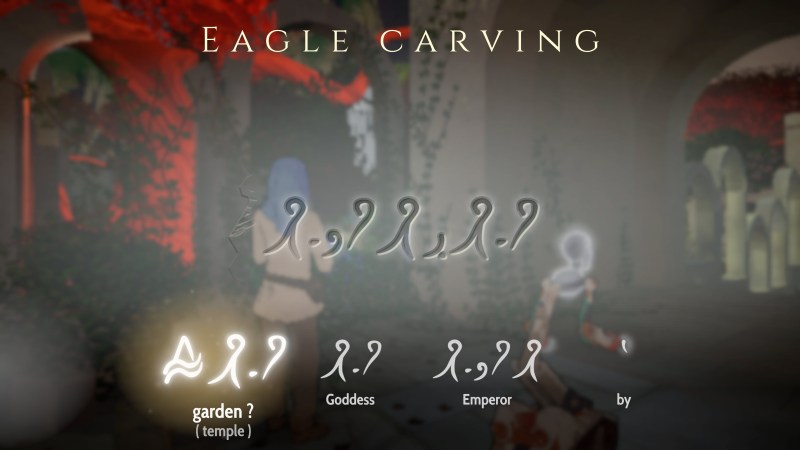 Above: As archaeologist Aliya, you can attempt to translate the alien language you encounter.

As I walked around the screen, Aliya could inspect objects and chat with Six. Occasionally a window pops up with a series of characters, each one accompanied by a couple different options for what it might mean. Once you lock in a “definition” for that symbol, it’s translated for you when it appears in other inscriptions around the archaeological site.

“We have an entire ancient language we’ve created for this game,” said Inkle cofounder Joseph Humfrey. “While the Western writing systems use alphabets, these are more abstract symbols. These glyphs are like hieroglyphs. They can be quite pictorial. We’ve taken inspiration from languages like Chinese and German. Some of the symbols, like this one, we chose it because it’s a symbol that’s designed to look a bit like foliage or grass. Each one has a real semantic meaning, but we won’t exactly tell you what it is. You have to infer it from context or—when you do a few translations, you’ll start to see commonality between words.”

As you explore, Aliya starts piecing together a rough timeline for when she thinks things happened in the civilization’s history. This also acts as a handy guide for the lore. You can visit this at any time, and in the full game, you’ll also be able to switch out meanings for symbols. For instance, I was extremely confident that one symbol meant “freedom,” but when I saw it in context with a few other glyphs I’d interpreted, I realized I was likely wrong.

“There’s a right answer, but it’s not important to get it right,” said Ingold. “It’s important to move forward somehow. We were very inspired by [Jonathan Blow’s] The Witness when we were designing the game, that sense of exploring an environment and finding puzzles. But at the same time, we were inspired by being a sort of anti-Witness. There isn’t necessarily a right answer. If you get it wrong, you’re still moving forward.” 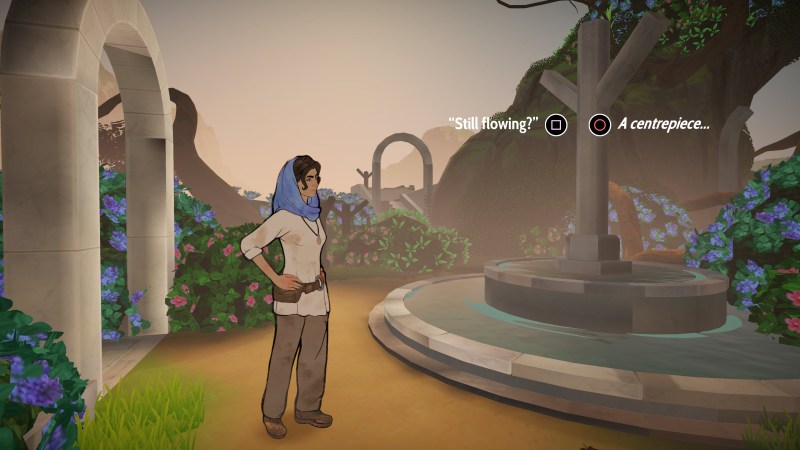 Inkle’s previous game 80 Days was the Independent Games Festival’s 2015 winner for Excellence in Narrative, and it received nominations in several categories from the British Academy of Film and Television Arts (BAFTA). It’s a sprawling narrative adventure that unspools in several directions, loosely based on Jules Vernes’ novel Around the World in Eighty Days.

“80 Days was our attempt to show that interactive fiction could be engaging and accessible and exciting. A lot of things that people who, when they first see text-based games—they just assume that they’re going to be dull and impenetrable and not really give you any real choices,” said Ingold. “So then we thought, OK, can we solve that problem for adventure games? Can we make them feel forward-moving, not these things where you get stuck all the time?”

Developing Heaven’s Vault presented a lot of different challenges from 80 Days. Specifically, even though the art style is 2D, players are walking around and exploring a 3D space instead of clicking on text cards. Inkle had to make it easy for folks to find bits of the story and interesting things to examine.

“Basically this is quite an open environment with a variety of routes through it,” said Ingold. “People kind of self-propel, because once you’ve done a little area—you did the lower section here, and now you know you’ve covered that, so you need to find somewhere else. As long as you can see a path that you haven’t explored, people tend to find their way through. Mostly it’s level design, just normal classic level design.”

The studio also ended up adopting a control scheme that’s similar to Naughty Dog’s Uncharted series — a departure from its interactive fiction roots, which primarily utilized point-‘n’-click mechanics. And under the hood, Ingold says that the studio split the game up into “tiny bits of content” to further accommodate this style of play.

“The game says, if you can see this thing, you can do it. If you know this fact, say this line. If you know this fact but not that fact, say this line,” said Ingold. “That all gets chucked in a bucket and the game pulls out anything that makes sense. Then you just write lots of possibilities and make sure the dialogue is moving forward and people are saying interesting things. If they’re not, you make sure that line doesn’t come out of the system. It’s not procedurally generated, but it’s sort of procedurally assembled. It’s all handwritten content, but the order it’s delivered in changes.”

However, the game still runs on the same narrative engine as 80 Days. From the start, Inkle has developed its own in-house tool to manage dialogue and interactive fiction. It also released its free Inklewriter tool that enables folks to make their own text adventures.

Humfrey says that the engine created prose for 80 Days, whereas in Heaven’s Vault, it generates something that’s more akin to a film script.

“But just the way you write, using the writing tools, is designed to make sure you have little self-contained stories that always move forward,” said Humfrey. “They don’t, by default, allow you to continue and repeat content, in the way you might always see in an RPG, where you have a hub that has you asking a question and then you keep on asking it over and over again.”

Ingold has spent a year and a half writing the script for the game so far. The demo is just one scene, and it features 20,000 words alone. It’s been an iterative process — Ingold will sometimes hand the script to the art team, and then when he goes back to look at the environment they’ve created, he’ll decide to add more content so that the character has things to say about specific objects around her.

“Even the glyphs,” said Humfrey. “This glyph only exists because one of the artists doing textures, a junior artist, decided to use that symbol he’d invented on a door. We thought it was so appropriate to the location that we decided to replace one of the existing symbols in the language with that, so it all ties together. As a player, if you happen to notice that, you get a sense of narrative meaning just looking at a texture on a door.”

Ultimately, even though translation is a core part of the game, players can do “as much or as little of it” as they want. The story will stand on its own, it’s just that perhaps it will have less context for those who opt out of doing the homework.

“This is kind of an adventure game, but it’s an adventure game where you’re always moving forward,” said Ingold. “If you miss something outside, you won’t be able to go back and get it anymore, but the story will make sure it always copes. You won’t get stuck because you missed something. You just have a slightly different path through, and a different theory about what the place is.”