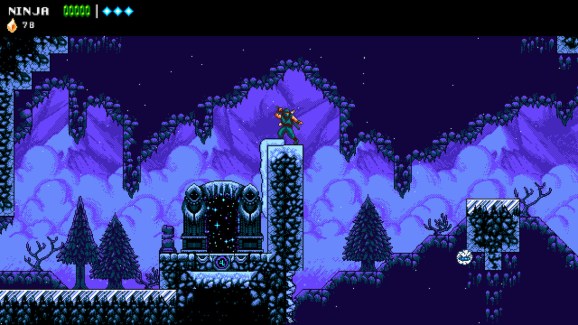 Expect Ninja Gaiden, and let The Messenger surprise you with how it changes over time.

On a chilly day in Boston, a crowd had gathered around a handful of demo stations that Sabotage set up for its upcoming action platformer The Messenger. The studio was one of a couple dozen of smaller teams tucked into the Indie Megabooth on the showfloor of the PAX East fan event. While every booth was busy, The Messenger was drawing far more eyes than anything else in the vicinity, and I knew why. It was the same reason that I was going to see it.

The Messenger looks like Ninja Gaiden … the original from the NES, and that’s cool.

In his hands-on impressions from GDC, GamesBeat reviews editor Mike Minotti did a good job of summing up The Messenger. It’s like Shovel Knight but modeled after Koei Tecmo’s 1988 NES action adventure Ninja Gaiden, not 8-bit platformers. It’s coming to Nintendo Switch and PC later this year, and players should expect some sharp platforming, traversal puzzles, and humorous writing. As I played, I also saw hints of a Super Metroid-style open world and a mechanic that will bounce you between 8-bit and 16-bit visuals.

I’m into The Messenger, and I cannot wait to play the hell out of it, but I couldn’t help but feel bad waiting among the crowd because we all stopped for the same reason: We recognized our nostalgia in The Messenger.

It is using elements that I’m already familiar with, and I couldn’t resist its call. That bummed me out because I could feel myself ignoring other games that were unfamiliar and different. Should all of those other developers add a pinch of 8-bit homages if they want to succeed? Even if it seems to work, I hope not.

Sabotage is aware of what it is doing here, though. The company even debated about whether or not it should reveal that players will jump from 8-bit to 16-bit visuals during the course of its game.

“There’s something like 7,000 games that came out on Steam in 2017,” Sabotage cofounder Martin Brouard told GamesBeat in a conversation at PAX East. “We have to find ways to get people’s attention. One of those ways to reveal the fact that we switch from 8-bit to 16-bit. At first we wanted to keep that secret. But then, maybe, we’d have had a tenth of the attention we’ve gotten since we revealed the game. It was a difficult decision, but having shared that has been beneficial.

The studio is also trying to do more than re-creating Ninja Gaiden.

“Ninja Gaiden is obviously one of the inspirations,” Brouard said. “That’s what we want the player to think at the start. But it has a lot of inspiration from other games of the retro era, both in 8-bit and 16-bit. The creative director has been collecting these games and playing them since he was young. He’s wanted to make this game since he was eight years old. It’s been evolving in his mind for many years.”

And I know that I shouldn’t feel bad. This is a game I want to play, and it’s a game that Sabotage wants to make, so what’s the problem? Maybe the problem doesn’t exist. Especially since The Messenger team is planning to use the shell of something familiar to guide players through unexpected and unfamiliar experiences. If it has to start with a common touchstone to accomplish that — well, you know I’m going to show up for it.

You can read the full transcript of my interview with Brouard below:

GamesBeat: Is The Messenger only a remix of Ninja Gaiden?

Martin Brouard: Ninja Gaiden is obviously one of the inspirations. That’s the start, what we want the player to think at the start. But it has a lot of inspiration from other games of the retro era, both in 8-bit and 16-bit. The creative director has been collecting these games and playing them since he was young. He’s wanted to make this game since he was eight years old. It’s been evolving in his mind for many years.

We started the company, Sabotage, and started doing this two years ago. We’re near completion. The idea is it takes all your fond memories of these games from the past. We want you to feel like you’re 9 years old again, playing with your friend in the basement and passing the controller. But with modern game design. We’re taking a lot of what we’ve learned in the past 30 years of game design. We want you to feel those memories, but with the controls of today. You’ve played it. You know the controls are very tight, very responsive.

GamesBeat: It does play like I remember Ninja Gaiden playing.

Martin Brouard: There’s a lot of tropes that we acknowledge early on in the game. If you read all the dialogues from the shopkeeper, there’s a lot of references to that stuff. It’s like a pact with the players. We know it’s cheesy. We know these are clichés. But let’s have fun doing this together and make fun of it at the same time. You’ll be laughing like when you watch a Deadpool movie and playing a cool action game that’s going to surprise you in many ways.

Sometimes you’re not expecting a platformer to teach you life-affirming lessons. Sometimes the shopkeeper will go off on a long story. If people don’t care about that, they can skip through 90 percent of the dialogue and enjoy the pure action platforming. The game, later on, when it switches to 16-bit, it comes closer to a Metroidvania. Then you have to do all exploration. You need to go back to the previous levels and find hidden stuff that will help you get to the final true ending of the game. It moves from a simple 8-bit platformer to something else entirely. But you want to start at the beginning feeling like this is a classic platformer. 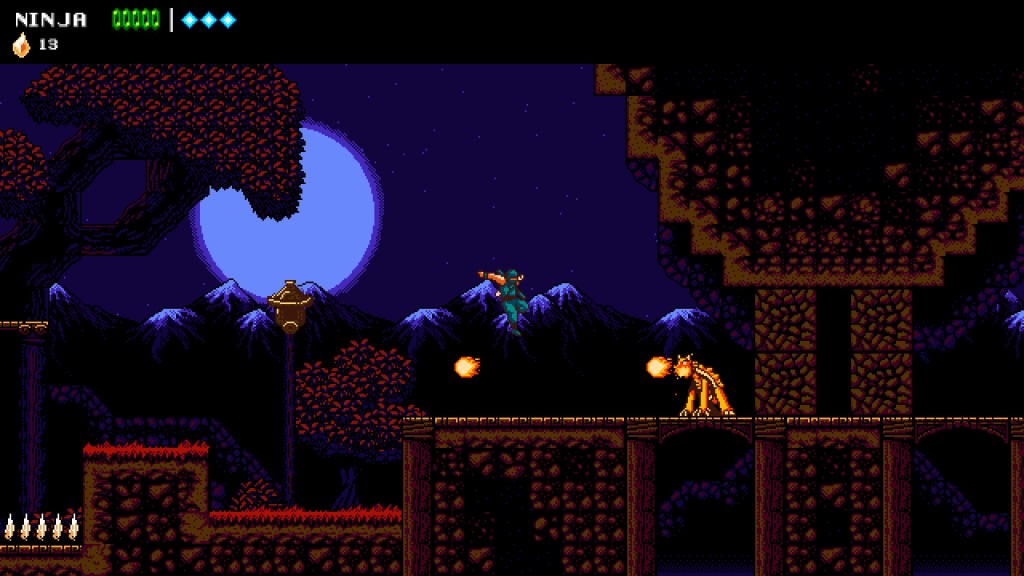 Above: What a terrible night to have a … uh, ninja.

GamesBeat: Does the game move into predominantly 16-bit graphics at a certain point?

Martin Brouard: Exactly. About the third of 10 levels, something happens in this weird level, and then the next level is actually in 16-bit. That’s how it works. It’s fully in 16-bit now. The character doesn’t understand what’s going on. For a couple of levels, he plays, and he’s like, oh, I’m feeling like this master ninja. It’ll take a couple of levels to figure out that he’s actually traveling through time. The switch from NES to Super NES aesthetics is our way of saying, you’re moving 500 years in the future.

That plays into the gameplay. When you do revisit some of the other levels, some areas are 8-bit and some areas are 16-bit. You can traverse those different tiers in order to switch it. You don’t manually switch the game from one to the other. But there are some elements in terms of level design that we can do, because the game runs in 8-bit and 16-bit at all times. We can basically perform some cool level design tricks to do stuff with both on the same screen. A boss could have parts in 8-bit that are the only parts you can hurt. We can do anything we want because the game already runs like that. All of the levels are done in both versions, and all of the songs in the game are also done in both versions.

GamesBeat: Ninja Gaiden on NES was cheap because enemies would respawn if you scrolled a few pixels backward due to memory constraints. Do you have anything like that?

Martin Brouard: We’ve kept that. Every time you go off the screen, if you go back, the enemies have respawned. We want to keep those features. It’s made by a limitation, and we respect those limitations, because it’s a nice game design element, to use limitations to do something. We didn’t keep stuff that didn’t age well, like the three lives and then continue. We replaced the deaths with the little demon that follows you around and steals your moves and disses you about how you died. It’s this annoying character. It’s a dunce cap mechanic, is what we call it. It’s to make you feel a little bad about having failed, but it’s much funnier. It plays into the humor of the game.

GamesBeat: Where do you draw the line?

Martin Brouard: We try to stay as true as possible in terms of color palette and limitations like that, but sometimes we cheat just a little bit in order to make sure that the game is the most fun possible. It looks, basically, like a game that would have been possible on the NES — top quality for the NES, top quality for the Super NES, but we still want to keep those limitations. It’s what makes the charm of the game. It’s a guide for us, to follow this sort of path. A lot of pixel art games aren’t necessarily retro-inspired, and they’re really good stuff. But for us it was really an homage to the NES and Super NES. We needed to be as close possible. But sometimes it makes more sense to do something different anyway.

GamesBeat: Did you take any cues from something like Shovel Knight?

Martin Brouard: Exactly. Shovel Knight is a labor of love and it shows. That’s why it’s been so successful. It’s made by passionate developers that really did exactly what they wanted to do. They’re an inspiration to us for that. Their game is super successful because it’s good. We know there’s a niche of gamers that loves that, and that’s exactly the niche we’re targeting at Sabotage for all of our games. We want to make games for people who are into retro gaming, but also the modern aspect.

GamesBeat: Are you confident you can live up to expectations of Ninja Gaiden fans while also succeeding in all the ways you want to undermine their expectations?

Martin Brouard: There’s something like 7,000 games that came out on Steam in 2017. We have to find ways to get people’s attention. One of those ways to reveal the fact that we switch from 8-bit to 16-bit. At first we wanted to keep that secret. But then, maybe, we’d have had a tenth of the attention we’ve gotten since we revealed the game. It was a difficult decision, but having shared that has been beneficial. A lot of people have heard about the game. People are excited about the game. 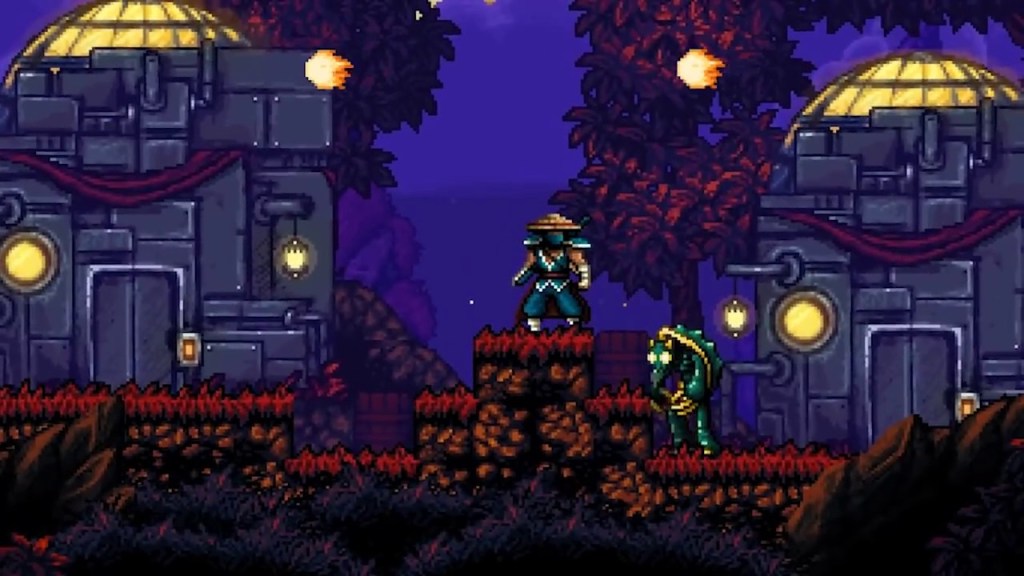 Above: The 16-bit visuals in The Messenger.

Devolver picked us up as a publisher. Nintendo is showcasing us an indie. They’re really happy about the game. In terms of expectations, the team we have to do this, we’re all experienced developers. We all have almost 10 years each in game development on pretty much all platforms. We’ve shipped games on many platforms. We’ve worked together. We’re a very solid team that doesn’t take a lot of looking after. Everybody’s responsible. It’s fun to work with these guys. I know they’re going to deliver. There’s no problem.

Thierry, the creative director, he’s the one with the vision. Everyone follows him. It’s his dream game. I’ve worked with many people in the game industry, and I’ve never seen someone with such a clear vision of where he’s going. That’s why I started the company with him, because it was a perfect match for us to work together.