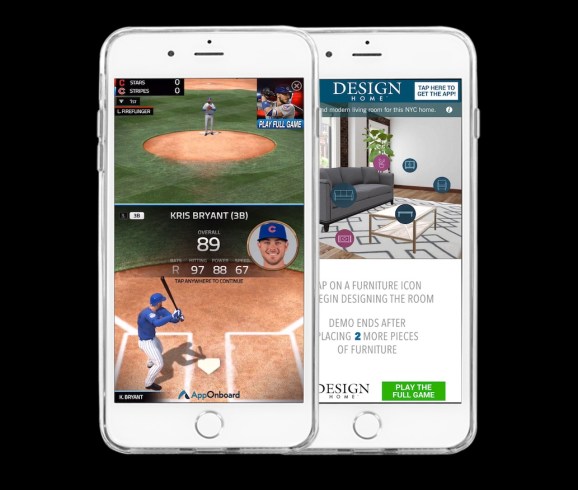 AppOnBoard lets you try out an app or game in demo form.

AppOnboard has raised $15 million for playable demos and games that let people experience an app before choosing to download it from an app store. AppOnboard calls these “full-fidelity” mobile demos for apps and games.

Jonathan Zweig, CEO of Los Angeles-based AppOnboard, believes his company has an interesting way to demo apps within ads that will counteract the ineffectiveness of mobile advertising.

“We’re creating a new category called demos,” he said in an interview with GamesBeat. “The notion of a playable ad was more like a mini game. We are creating something more that changes the way mobile users discover content.”

Zweig was a cofounder of AdColony, which built its business around video ads on smartphones. Opera bought that company in 2014 for $350 million. Zweig took time off to travel the world, and then he came back and started studying the ad business (at GamesBeat Summit 2016).

While watching his niece skip ads, he felt that advertisers wasted a lot of money on ads to get users who weren’t that interested in using apps. Zweig’s idea was to take the onboarding experience out of the app and turn it into an ad to draw in new users. He started AppOnBoard with Adam Piechowicz, and the company spent two years developing its tech for creating simple demos of mobile games and apps. Zweig’s team built a mini game engine, like a mini version of Unity, that allows any game or app to be re-created in a small form inside an advertisement. It wouldn’t be the whole game or app, but it would reproduce the core loop or the heart of the experience.

With the increasing complexities and file sizes of mobile apps and games on the App Store, AppOnboard’s technology allows developers to let users preview their apps or games in high-end experiences served as ads within other mobile apps and games. The demos mirror the actual app or game experience, and they have driven more than a billion interactions since being launched.

These demos show what an app is really like, and that’s why mobile advertisers are excited about playable ads. That’s important, as 15 percent of users say that they were tricked into downloading a mobile app, according to the State of Inbound Marketing Report.

In the last year, millions of rooms were designed in demos of the Design Home mobile game from Glu, using the AppOnBoard technology. AppOnBoard has also created chronological heat maps, which visualize where users interact on the screen while using an app. That leads to more insights about how users engage with apps or games. And that, in turn, leads to better acquisition of high-quality users, Zweig said. Right now, 70 percent of users will open an app once and never return, according to market researcher Localytics.

The platform enables employees with non-engineering backgrounds to create demos for any app or game, he said. Customers include Jam City, Glu, Outfit7, Kongregate, and Rovio.

“With the next wave of mobile gaming producing much more immersive content and larger file sizes, we believe AppOnboard’s technology will help developers in a multitude of ways,” said Sang-Ho Park, executive director of Korea Investment Partners, in a statement. “AppOnboard has developed a technology and platform that allows for quick, intuitive creation of app demos that look identical to the game but at a fraction of the size. We believe this technology will be a huge tool for developers.”

Rivals include mNectar, Google, Chartboost, 1app, Tresensa, and Cross Install. AppOnBoard has more than 40 employees, and it is targeting to grow to about 70 this year, Zweig said.

“We are doubling the business every 90 days,” Zweig said. “We expect that to pick up as the supply grows and we scale the team.”