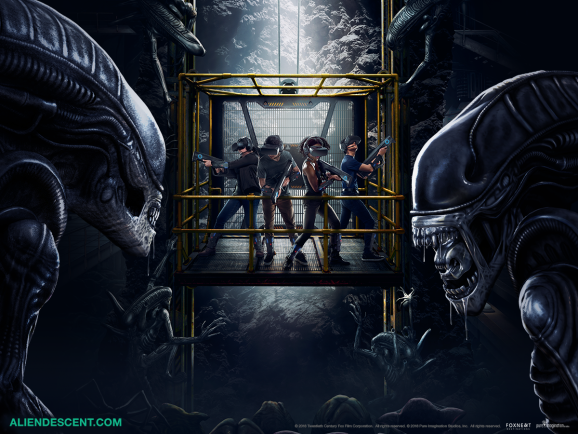 FoxNext Destinations and Pure Imagination Studios are bringing the horror of the Xenomorphs to the malls of Orange County, California. Alien: Descent is a new location-based virtual reality experience based on the hit movie franchise — and unlike other VR arcades, this one won’t weigh down players with a PC backpack. It opens on April 26, and folks can sign up for tickets now on its webpage.

Up to four players can investigate a beleaguered Weyland-Yutani mining station in Alien: Descent. Each person will don a head-mounted display (HMD) along with motion-tracking sensors on their arms and legs, and they’ll be armed with a “weapon” to fight off any sinister alien lifeforms they might encounter. The space at The Outlets in Orange County will also have moving platforms and other environmental tricks to add to the immersion.

Other location-based VR experiences, like Zero Latency‘s roster of free-roaming games, typically outfit players with a PC backpack. Pure Imagination claims to find a suitable alternative, though, that enables Alien: Descent to skip that. According to cofounder Joshua Wexler, most of the rendering will happen in the players’ headset, which allows them to dispense with the need for a portable PC.

“Pure Imagination has combined a range of proprietary solutions with leading off-the-shelf systems to create a uniquely immersive VR experience that blends the best of these technologies to allow high-level functions like rendering to happen on the HMD itself, while other processes are handled remotely,” said Wexler in an email to GamesBeat. “Even though it’s wireless, the company believes it’s achieved a visual quality as good as, or even better than the tethered VR experiences available today.”

Pure Imagination is an entertainment company that’s developed immersive experiences before. It has put together interactive rides for theme parks like Six Flags, like its Justice League: Battle for Metropolis installation, which equips players with laser guns to help fight off invaders. It’s teamed up with FoxNext Destinations, an initiative that’s focused on location-based experiences.

It will be the first time Alien gets a location-based experience, though. And good thing it’s multiplayer — maybe it will be easier to survive the Xenomorphs with three buddies.