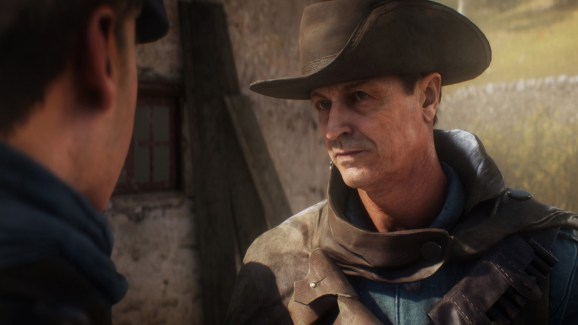 Don't expect the next Battlefield to ship without a campaign.

The Battlefield team at developer DICE is ecstatic today, according to a source familiar with the studio. That’s because Call of Duty: Black Ops 4 may not have a single-player campaign when it ships in October, according to Polygon and multiple corroborating reports on Activsion’s biggest series. Instead, Black Ops developer Treyarch is focusing on the military shooter’s competitive multiplayer and cooperative zombies mode, which are both megapopular with Call of Duty’s millions of players.

If Black Ops 4 launches without a campaign, the team at DICE is happy because it thinks it may have an advantage over its rival when it launches the next Battlefield. EA has already announced that it will release a Battlefield sequel this year, and in March, I reported Battlefield V (as EA is calling it) will return to World War II. In Battlefield V, DICE is planning to continue the vignette-style storytelling that it started in the campaign for Battlefield 1, and that offering could now attract people who played Call of Duty for its bombastic action-movie-like stories.

I reached out to Electronic Arts, and a spokesperson said it would not provide a comment. Activision told Polygon that it does not comment on rumors.

But the comparison between Call of Duty and Battlefield may favor DICE’s game in 2018 for more subtle, psychological reasons. I have loved some Call of Duty games in the past, and I have skipped the campaign in most of them — this includes the entries in the series that I spent 1,000-plus hours with. But I can’t help but recoil at the value proposition of paying $60 for just online multiplayer modes. Even when I didn’t touch them, the story campaigns helped me justify the price to myself. Paying the same price for what many will perceive as a smaller game may turn into a tough sell for the Call of Duty team.

Activision has not revealed the full breadth of content in Black Ops 4 yet. A May 17 event will provide most of those details. It’s worth pointing out that Activision also hasn’t announced a price either, but retailers like GameStop and Amazon are already taking preorders at $60. I expect Call of Duty will cost $60 — although Activision has experience releasing multiplayer only games like Blizzard’s Overwatch at $40 with an optional $60 upgrade version that includes additional cosmetic items.

DICE sees this as an opportunity, and it’s one that EA may try to capitalize on as part of its marketing efforts. The company had similar momentum going into 2016’s showdown between Call of Duty: Infinite Warfare and Battlefield 1. Shooter fans were excited to see DICE’s game returning to a classic setting like World War I just as Activision was releasing its most futuristic sci-fi Call of Duty ever in Infinite Warfare. That led to fans giving Battlefield 1’s reveal video the most likes ever for a game trailer (a record that still stands) while Infinite Warfare’s announcement video has more than 1 million downvotes on YouTube.

In the end, Call of Duty still outsold Battlefield, just like it always does. But EA’s marketing and presence at industry events like E3 (the Electronic Entertainment Expo trade show) in Los Angeles didn’t hammer how Battlefield 1 compared favorably to Infinite Warfare. That makes sense because a difference in setting is a difficult distinction to talk about without bringing up the competition. But if Battlefield V has a story campaign and Black Ops 4 doesn’t, EA could frame its messaging around that without ever having to mention Call of Duty by name.

Battlefield V is one of EA’s big games for this year’s E3, and it has a chance to talk about how it’s the last triple-A shooter standing with a blockbuster campaign mode.

At DICE, the team thinks that Treyarch removing the Black Ops 4 campaign is a sign of weakness. The Activision reportedly cancelled the mode earlier this year because the story was “too out there,” so this was not the plan from the beginning. Now, it’s up to EA to exploit that potential weakness to Battlefield’s advantage.

Even if Activision didn’t plan to launch Black Ops 4 without a campaign from the beginning, it may still have a new mode that could take its place. Following Polygon’s report, Call of Duty news site CharlieIntel posted a separate story claiming that Activision support studio Raven is working on a battle-royale mode for Black Ops 4. This take on the last-player-standing shooter (made famous by PlayerUnknown’s Battlegrounds and Fortnite) reportedly does not support 100 players yet, but that is the goal the developer is working toward.

Of course, DICE is already prototyping its own take on the popular last player-standing genre as well, a source explained. This is a reminder that while Battlefield and Call of Duty may seem like they are competing against one another in a vacuum atop the sales charts, they both face a tough market this year thanks to the popularity of Fortnite and PlayerUnknown’s Battlegrounds. Fortnite is dominant on console, and it could really make the value proposition for either of EA’s or Activision’s games look rough by comparison, and that competition could drag down sales or microtransaction revenues for Call of Duty and Battlefield.