Of all the ideas at our recent GamesBeat Summit 2018, I loved the notion of The Leisure Economy. This is about a utopia we can create where people can make a living by getting paid to play games.

As I noted in my opening talk at the recent event, I do that as a game journalist. But today, we have many more candidates who have a chance at living the dream. They include esports athletes, cosplayers, influencers, YouTubers, livestreamers, modders, and many other people getting paid to play.

The big question is whether game companies can create a long tail for these people who are inventing careers that didn’t exist five or ten years ago, so that more than just celebrities can cash in. We studied this idea in a panel moderated by Adam Sessler, cofounder of Spiketrap and one of the original influencers in the game business as the co-host of the TV show X-Play. The panelists included Jon “Neverdie” Jacobs, CEO of Neverdie Studios (and a man who bought and sold an island in the virtual world Rocktropia); Gio Hunt, executive vice president and executive producer of platform technology and experiences at Blizzard Entertainment; Philip Rosedale, founder and CEO of High Fidelity; Craig Donato, chief business officer at Roblox.

Jacobs definitely believes that once you can use blockchain to trade assets between games, the market for players who can make a living playing games will skyrocket. Rosedale believes that virtual work in online venues such as Roblox shows the virtual eocnomy is “under way.” Donato said it took a long time to evolve the self-perpetuating creator economy in Roblox, which now has 50 million players a month. 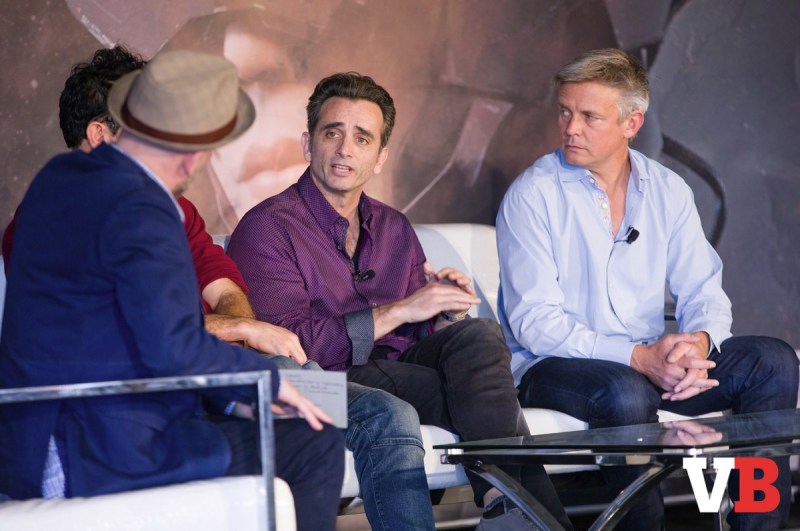 Above: Gio Hunt of Blizzard makes a point as Philip Rosedale of High Fidelity gives him the evil eye. (Just kidding).

“The top creators can now make enough money that they can form teams,” Donato said.

Hunt said that growth of esports audiences has been organic over the past two decades, and now the transition we are seeing new ways for players to make money inside gaming experiences and outside the games.

“There are plenty of people who are approaching games as a job, and that’s an economy,” Hunt said.

I like this theme because it takes us from economics down to the personal level, getting into the conversation about what career advice you would give to your child or someone new in the industry. Of course you should stay in school. But what is the new “plastics” word to whisper into the ear of a college graduate? Right now, 500 students are going to college on League of Legends scholarships. They are joining the denizens of Second Life, who have been buying and selling goods and making a living in a virtual world for years.

These “creator economy” jobs might have seemed crazy in the past, but now they’re more than a novelty. In the meantime, many people are predicting that artificial intelligence will wipe out many traditional jobs.

Game companies carry a lot of responsibility in making this future happen. They are creating jobs across companies, and they are building platforms that will create whole economies of the future. This is not fantasy, as Tim Sweeney of Epic Games predicted last year that the Metaverse could be built within a few years. If you want to build the Metaverse, or the Oasis, I applaud you, because you will affect the lives of billions.

I think we should watch how this new generation creates their own work. At some point, that work is going to transition to play, and they are going to get paid to play, and that is how it should be. Imagine that. You could create a virtual world and transform the real world of jobs, and build a real world where everyone is playing, rather than working. That was the thinking behind this panel, and I hope you enjoy it.