Esports is leveling up with some huge investments that are happening in entertainment venues for staging the popular events. We’ve seen this happen with the joint announcement of a trio of companies supporting the H1Z1 battle royale tournament coming up this week in Las Vegas.

The H1Z1 Pro League will see its first professional battle royale esports league tournament starting on April 21 at a new venue in Las Vegas. Facebook will be the exclusive digital broadcast partner, and the event will be staged by Caesars Entertainment, league operator Twin Galaxies, and game publisher Daybreak Game Company. 15 teams will square off in a unique production stage that will be circular, with fans able to see a full set of teams on the floor at any given time.

I talked with Jace Hall, co-chairman of Twin Galaxies, about what he calls the leap from esports 1.0 to esports 2.0, where everybody gets to participate in the success of an event, from the fans to the players to the team owners to the game publisher and the league operators. Venue operators are getting on board, with several major event studios launching on the Las Vegas Strip.

I also asked Hall about the big decision by Twin Galaxies to strip Donkey Kong king Billy Mitchell of his crown after evidence of irregularities emerged for his high scores for the all-time best scores in classic arcade games. Here’s an edited transcript of our interview. 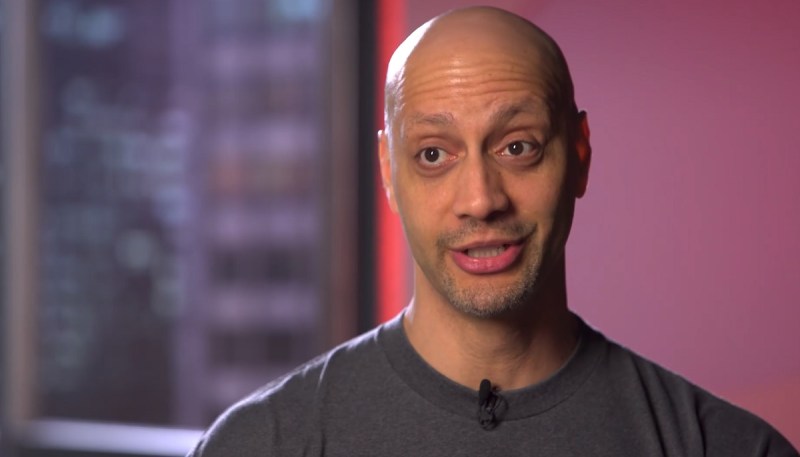 Above: Jace Hall is co-chairman of Twin Galaxies.

GamesBeat: I got a look at the esports arena video. It’s interesting, that you guys decided you needed to design this circular arena for a battle royale game?

Jace Hall: There’s a real logic behind that. We believe that esports has room to grow and be more engaging for a wider and wider audience. Historically esports tends to be focused on an informed playing public that knows the game they’re watching. That’s great for them, but it’s hard for someone who doesn’t know much about the game or esports in general to watch. We call that esports 1.0. It’s part of the esports 1.0 format. There are other things in esports 1.0 that impact the depiction.

A lot of esports are done on a stage. A stage is on one side of the room, and then audience fills it up like it’s a movie or a play or a concert. The problem with that is, that presentation doesn’t intrinsically feel like sports. We watch sports in 360 degree environments, generally, whether it’s basketball or football or baseball. You get around the whole thing. Never mind the fact that we have 75 participants on the court, so to speak, all at once, but by creating a circular stage, right out of the gate, you make it feel more accessible. People are able to get a sense that this is a sporting thing going on here. They’re not wondering if it’s a DJ performance or a MOBA championship.

Having the circle allows us to have that 360 degree freedom, and the ability for fans to sit in line with their particular team. Depending on where the team sits on a circuit, you can sit in different sections. That’s more fun. Also, just visually, for someone watching a broadcast, it almost immediately feels sport-like. It’s less foreign. So circle stage it was. That thing is enormous. Finding a place to put it has been quite the challenge.

GamesBeat: It sounds like it’s a more natural expense related to it. That design may be easier to watch, but it’s more expensive.

Hall: Well, battle royale in general is more expensive. You have 60-70-plus participants all that the same time. Right there, it’s a difference in the number of computers you have to have to pull it off. It’s orders of magnitude larger than a League of Legends of Overwatch. Overwatch only needs 12 computers. Ours has 75, not counting everything you need for spectators and servers. 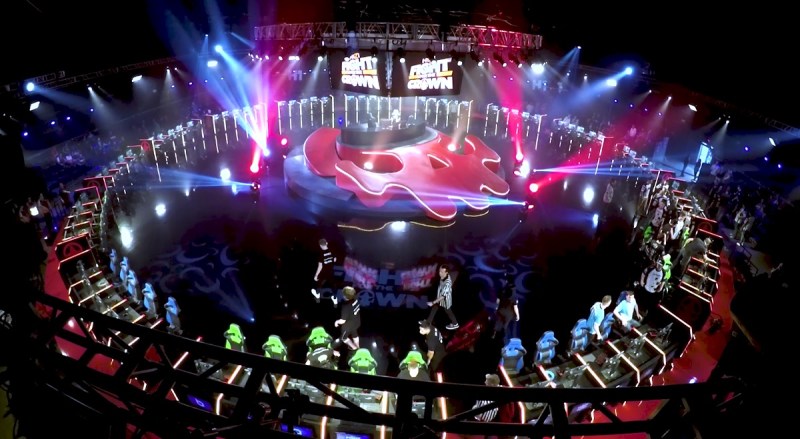 Above: The circular arena for the H1Z1 battle royale tournament in Las Vegas.

GamesBeat: How much seating is there for all the fans?

Hall: In the current space we’re using in partnership with Caesar’s—the number keeps changing a bit, but it’s somewhere in the 500-600 capacity. It might be a bit less if they chose to increase the VIP section. That uses up more space. But it’s in that range. We always have the ability for the championships, at the end of the season, to place our circular stage in larger arena spaces. Obviously Caesar’s has a very large one, where they hold big boxing events. We’ll see where we go with that.

GamesBeat: Do you have a lighting system, where the people who are still alive are highlighted, something like that?

Hall: I believe we do have a system that—it’s not specific to each person. It’s specific to teams, because teams sit together. We’ll be able to have some visual indicators, as that happens. That’s a good thing you point out. Making it as easy to understand as far as what’s happened, to the more mainstream audience—H1Z1 lends itself to a mainstream understanding. There’s nothing fantasy in it. It’s not crazy colors or unnatural creatures. Everything is grounded. That’s a cop car, that’s an ATV. It’s all easy to recognize. And the concept itself is easy to understand: just don’t get eliminated.

It’s one of the very few games that naturally is inviting for and understandable to someone who doesn’t know how to play. That’s one of the reasons we’re excited about using it to bring on what we call esports 2.0.

GamesBeat: Kent Wakeford from KSV was at our GamesBeat Summit conference this past week. He pointed out that there’s not only a lot of venture capital going into esports, and also all the team investments happening. There’s another layer that people aren’t quite aware of, all the investment in venues that’s happening all over the world. It seems like there’s a bit of a race on to build esports venues in a lot of places. That investment has to be enormous.

Hall: What that’s going to do—having all those venues is going to encourage more league opportunities, because they’ll need to fill their venues with something.

GamesBeat: For you guys, how would you look at trying to replicate this or keep it filled? Do you have a traveling format? Or do you do it all in one place?

Hall: At the pro level, we do it all in one place, with the exception of—at least right now, our league is worldwide. There could be a decision to have different regions, and then you would have pro level regions that could ultimately level up to the worlds in different countries.

But in terms of the short term expansion, you’ll see us also turn our attention toward the amateur ranks, the entire joe-to-pro pathway, how to become a professional-class battle royale player. Through the amateur process we’ll be able to potentially leverage all these event venues that are coming up. Gameplay that takes place online at home is a starting point. You earn your points and rise through the system. That’s going to be a very engaging process that will be inclusive of people who want to pick up the sport.

This is a change, where the league that we have, that Twin Galaxies is doing in partnership with Daybreak, is moving the game to really be a sport. It somewhat de-emphasizes the game as the focal point, the only reason to be involved. It emphasizes everything around it, like the league and the amateur ranks and the events and all that other stuff. Very much like basketball. The NBA and all the other leagues are what makes it interesting culturally to participate. We’re excited about taking this next step into esports 2.0.