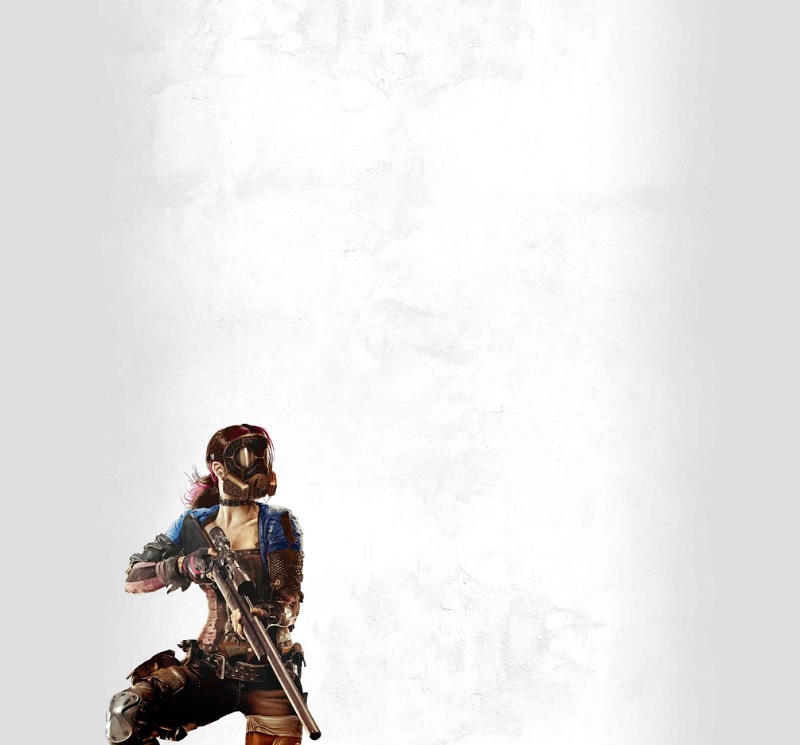 GamesBeat: Who makes most sense to be the owner of the venue? Is it Caesar’s or Twin Galaxies or Daybreak?

Hall: I would say they’re different businesses. The league business has its own attributes, dealing with broadcast rights and things of that nature. A venue business is all about getting people to your venue and then, once they’re there, entertaining them and getting them to spend money while they’re there. They’re very separated in terms of the models. They work together, a league and a venue. But yes, you’d think those who are very experienced in the event business in general – all the people management, ticketing, all this stuff – would be the optimal frontiersmen into this space. Also, the pre-existing venues that have been used for other sports might find additional purpose.

GamesBeat: Boxing doesn’t need a ton of broadband coming out of one place, I guess.

Hall: Here’s the thing. These venues, whether or not the sport itself needs the broadband, the audience needs it. So they all build it in anyway.

GamesBeat: This kind of venue, then, is fairly unique to esports? It has to have 75 players connected, and the fans as well.

Hall: Certainly. You want to have enough physical space, too. There are event spaces that just aren’t big enough to hold our stage.

GamesBeat: What about the notion that you’ll eventually need football-sized arenas to hold this sport?

Hall: That would be amazing. You’d probably see that in augmented reality esports, where people are physically running around, but they’re wearing goggles or whatever to see something different than the empty field. The whole audience wears goggles too.

GamesBeat: As far as H1Z1 goes, do you feel like you’re in a race, given how competitive that genre is now? With PUBG and Fortnite and other games coming along.

Hall: No, because—this gets into some of the difference between esports 1.0 and 2.0. With esports 1.0 the game is all-important. Those esports leagues are trying to capitalize on the popularity of a game, for as long as it lasts, and then they move on to another game. That’s not how sports usually work. It’s not supposed to be a marketing function. The NFL is not there to sell football.

When you go to esports 2.0, the league itself, the ingestion of a player, how someone goes from their tricycle to their racing bike—all of that is not necessarily related directly to the game. That will need to exist for any game in esports, and how well you do those things will be the most critical pieces to driving interest in the league.

We don’t see H1Z1 in the context of trying to compete with Fortnite or whatever. We see a genre category, battle royale, and we believe that can be the biggest gaming category yet. It’s going to outpace MOBA and everything else. We see H1Z1 as a unique entry point for the mainstream to understand the genre and be presented an arcade-like sport. Some of these other titles are great to play, but they’re harder to understand at a quick glance. That gets in the way.

Just like a movie category, the action-adventure movie category—you can have all kinds of movies, from 2001, a deep-thinking adventure film, to something like a Marvel film, easier to digest. We see H1Z1 and our pro league as a real mainstream approach and offering into the esports category of battle royale. We think it’s great that these other games are doing well because it brings more general interest into the category of battle royale.

When someone who doesn’t play video games hears about battle royale, they might not ever want to play it, but they might want to see what it’s like. And so we want to produce the most digestible, front-facing, Marvel type of fun, easy to understand product. H1Z1, because it’s not in a fantasy world, because everything looks like normal stuff, it lends itself to being able to build that whole superstructure around it. Even everyone’s mom can watch and understand it. “I get it, it’s like the Hunger Games. The point scoring is simple.” You don’t have to decipher anything complex. 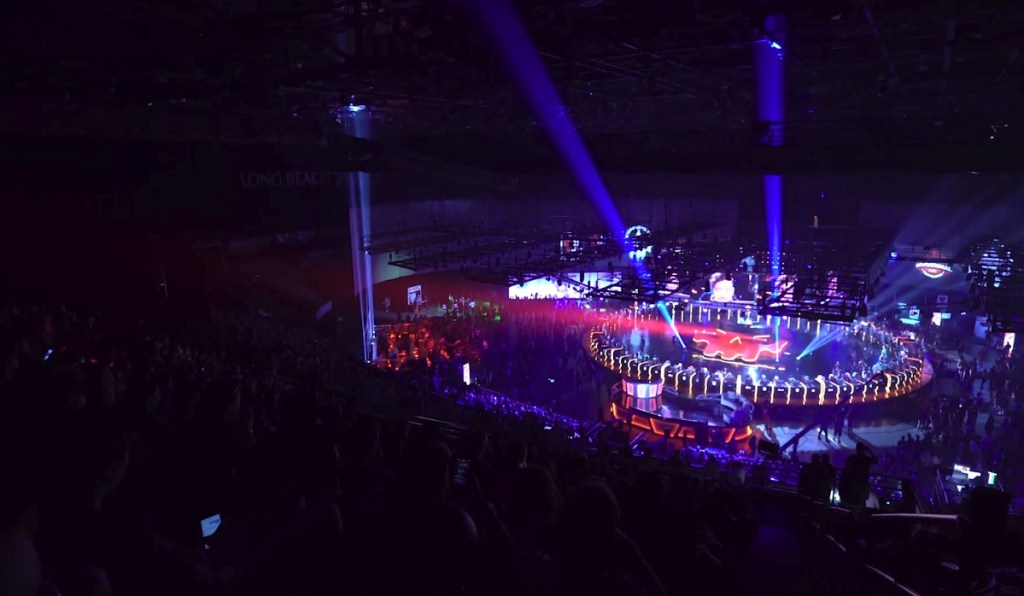 Above: The 50,000-square-feet H1Z1 arena at Caesars can accommodate hundreds of fans.

GamesBeat: Have you talked about how much is being invested in building this place?

Hall: No, we haven’t talked about that. I don’t think we can be very specific. But I can tell you that we’re investing whatever it takes to do it right. It’s not just an economic investment. It’s also a cultural investment in our communications with the players. In the esports 1.0 universe, all players are to the publishing entities, ultimately they’re just customers. What value does the customer bring, other than just buying your products? Maybe just some word of mouth.

In esports 2.0, a player is not a customer of the league. A player is a point of interest. All of the players’ stories are the points of interest. We get excited about NBA basketball because we hear about Kobe Bryant or Shaquille O’Neal. We’re interested in the players, not the name brand on the ball. In the new esports, the emphasis culturally is on the player. It’s helping players coming from esports 1.0 to understand the difference and realize their own value. In esports 1.0 the focus of content and interest is the game. In esports 2.0 it’s the players and the teams. That’s the switch. The game is there to serve the players, rather than the players serving and bringing attention to the game.

GamesBeat: Stepping back, can you talk about what was interesting to you about Twin Galaxies? It seems like a different sort of career for you.

Hall: Having always been playing video games and involved all the time, one way or the other, in making them or publishing them, I knew that there’s more than—when you look at the ecosystem of the game space, you see the primary pieces being the publisher, the developer, and the consumer. And then you have a third piece, the news media. That’s the world. In between all of those pieces, a bunch of stuff is incredibly important. It’s all about recognizing achievement in the space. Nothing has really done that.

Twin Galaxies, for 30 years, that’s what they’ve focused on in their capacity. They weren’t there to sell a game. They were there to say, “You accomplished this. That’s amazing. We’ll authenticate it and tell everyone about it.” In a sports universe, that’s by far one of the most important things that exist, that recognition of achievement. Whose job is it to recognize that? Not the publishers.

In acquiring Twin Galaxies in 2014, the mindset was to facilitate that vision of Twin Galaxies, make it as wide as possible, and establish a place for people who participate in the activity of playing video games to bank their achievements and leverage those achievements over the course of their lives toward whatever they want. Like the IMDB will make record of who was in what movie, what writer wrote what, and people refer to that when they ask, “What’s your previous work?”

You have Twin Galaxies authenticating and banking all these player achievements, and providing rules and governance and structure. Then you realize, Twin Galaxies would naturally lend itself to league governance. It’s already in the governance business on the individual level with rules and regulations for recognizing achievement. If it started to operate leagues, not only could it provide a steady, independent hand toward the league, but it could also mark all the achievements and bring them into its database as well, so those players could be accredited.

There’s a reason you’ve heard of game of the year, awards like that, but you’ve never heard of a player of the year. It’s never existed, in 30-some years. Don’t you think that’s odd? But it’s not odd, it’s by design. Twin Galaxies could be that entity to eventually have a player of the year, to break that down by category or genre and have all the statistics to back it up. It’s not so much a shift in what I’m doing. It’s just capturing a portion of the video game space and formalizing it. It’s always been there. 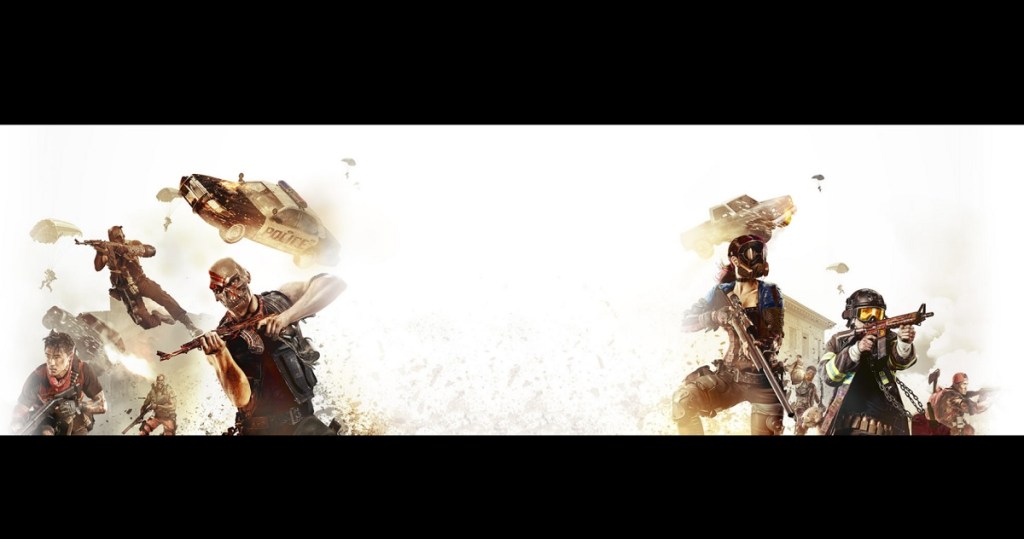 Above: H1Z1 is hoping to hold off rivals in battle royale such as Fortnite and PUBG.

GamesBeat: We saw the importance of Twin Galaxies with the Billy Mitchell decision. That must have kept you very busy.

Hall: Here’s an example. Here’s this Donkey Kong high score and this arcade game player. It turns out that there was a misrepresentation of some of these performances. Well, who cares? It’s an old arcade game. But look at the coverage. Let me be clear about this: Twin Galaxies did not reach out to news organizations. It posted inside one of its dispute forum threads, 300 pages deep. Within six hours it was everywhere.

People ask why. There’s a bunch of surface reasons you can point to. But the real reason people pay attention to it is because the idea that video game achievement is important and should be treated with importance—everybody cares about that, the quiet majority that plays video games and has achieved things. When something is holding fast to that idea, that these things are important, it resonates with people today.

There are all kinds of drama on top of the whole thing, but ultimately the signal is that people care about this subject of achievement in these virtual spaces. That’s only getting stronger. It’s not going away. Twin Galaxies’ responsibility is to help shepherd that conversation, and least be the one thing in the games space that people can count on to get to the bottom of certain issues.

GamesBeat: It’s interesting to see where all these activities go. They could go pretty far and wide.

GamesBeat: Anything else you wanted to add?

Hall: Only that we’re going to have a spectacular launch on the 21st. We have a great partnership with Facebook, which is doing our digital broadcast of the league matches. That’s in concert with our strategy to reach the widest audience and demographic possible, not just hardcore gamers. If you want to do that, you can’t distribute your broadcast in a place where only hardcore gamers are going to be. You have to distribute it where everyone is going to be, and provide a way to discover it and see something and become part of esports.

Everyone’s hearing about esports. They don’t want to be left out. But at the same time, a lot of people don’t want to necessarily participate and play. Facebook is working with us to help bring a consumable experience to everyone. That’s exciting. Or you can see it on the H1Z1 Pro League website.