Neverwinter Nights marked a transition for the Dungeons & Dragons-style of video game. It was the first game that used the then-new 3rd Edition rules. It’s one of the first major role-playing releases of the post-Infinity Engine era. But most of all, Neverwinter Nights brought the RPG community together on an unprecedented scale by involving them in the process of both play and creation.

Now Beamdog, famous for their excellent Enhanced Editions of computer RPGs of that era, brings us its latest in Neverwinter Nights: Enhanced Edition, but this release proves to be much different than its predecessors due to its emphasis on getting the community involved. And in talking to the community about Neverwinter Nights, it’s clear that to do it justice, they could do it no other way.

The appeal of Neverwinter Nights was always about a synthesis of how the community interacts with RPGs. “To me, Neverwinter Nights was a real high point in the industry, fitting somewhere between the worlds of persistent large-scale MMOs and single-player role-playing games,” says Trent Oster, the president of Beamdog. He also served as game director of the original game when it was first released in 2002. “Neverwinter Nights offers the ability to host an adventure for a large group of friends and then interact with them as a Dungeon Master, tuning the experience on the fly. That is a pretty amazing scenario.” 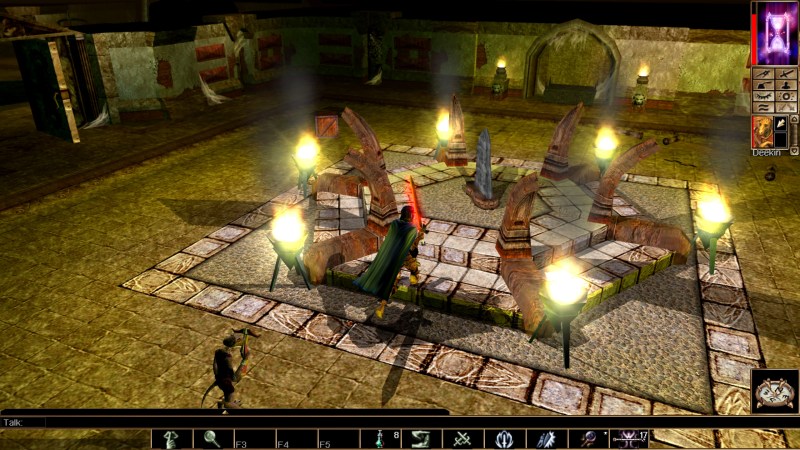 Above: The original Neverwinter Nights came out in 2002, and was a big leap forward for D&D games in terms of presentation.

Community in creation seems to be the common denominator in why the game is so beloved. “Initially, what attracted me to NWN was the opportunities it offered of unfolding your creativity. I think many people expected NWN to be a sort of spiritual successor to Baldur’s Gate (and were consequently somewhat underwhelmed by NWN’s official campaign), but to those that took part in the custom content (modding) community, the true potential of NWN very quickly materialized,” said Søren Møller, the admin of Ravenloft, a prominent persistent world in Neverwinter Nights that will soon make the transition into the Enhanced Edition framework. “In the first years you would have new exciting releases by community members every week, many which equaled professional products in quality. Having earlier created content for games from Doom to Counter Strike, I jumped straight into that, most notably releasing a beholder creature model that kept me occupied for the first long while.”

Birth of the Author

Oster notes the sea change Neverwinter Nights brought as a shifting of media. “I often think of Baldur’s Gate as a novel which you play through as the main character. The story is handcrafted and engaging, but it is a static story, told about the one hero.  I always imagine Neverwinter Nights as more like the pen and paper experience. It’s less a novel and more the scaffolding for an adventure. They story is the result of the actions of the party, not just ‘the chosen one.’  I think there is a vast space in that kind of experience which we are just scratching the surface on.”

The string that runs between tabletop games and computer RPGs resulted in many great user-created single-player modules in Neverwinter Nights. “I had been running tabletop D&D games through the 90’s and well, after the success of Baldur’s Gate, the possibilities afforded by Neverwinter Nights had us all really excited,” says Stephen Nowland, published author and the writer of Aielund Saga, one of the best-known single-player modules for Neverwinter Nights. “I even thought for a while we’d give up on the pen-and-paper side of things and just do it all digitally! It didn’t turn out that way of course, but I was able to take some of my old story modules and convert them over to the computer.” Neverwinter Nights allowed him to take his ideas and create visual, tangible worlds. “I always liked creating detailed worlds for my pen and paper games too, and Neverwinter Nights allowed me to bring that detail and more to the experience, and I could showcase community content in my series as well.”

Aielund Saga, a tale of invading monsters and political intrigue, made use of all of Neverwinter Nights’ strengths. “The incredible flexibility to craft a flowing story, complete with in-game cutscenes, to take you from the very beginning to the ultimate conclusion of whatever story you’re trying to tell,” explains Nowland. “You can have NPC’s react and interact to events going on around you and create the feel of a living world, especially with control over lighting, weather etc. The atmosphere you can bring to your story really brings it alive.”