It wasn’t just single-player modules that Neverwinter Nights excelled at. The game also made the most of its online focus through persistent worlds. “Persistent worlds are like little MMOs. Each one will have a completely different community, set of rules, content, and mechanics. Some persistent worlds will offer an action-based environment. Others will encourage [player-vs.-player]. Another type of persistent world will be based around role-playing your character,” explains Laura Gauthier, lead programmer on Neverwinter Nights Extender: Enhanced Edition, a program that allows people to add new functionality to servers beyond basic scripting, and an incredibly vital piece of the puzzle in transferring the community from the old game to the new one. “I believe that persistent worlds are the lifeblood of Neverwinter Nights. There is a lot of custom content out there — including single-player modules of very high quality. However, to me, none of that can compare to the joy you can find from playing on a Persistent World.”

Persistent worlds aren’t nearly as big as an MMO, but according to Møller, that is a strength of the form. “I’ve been an avid pen-and-paper roleplayer ever since childhood and for the first time I felt I was able to experience something online that could live up to that. What’s great about NWN’s PWs is that their relatively small scope compared to MMOs allows for much more focused play style. This means that you can have servers that are somewhat casual about their approach to roleplay whereas others can be very ambitious about sticking to in-character and more mature themes. It was primarily the latter I yearned for and I found my online home in a place called Anphillia for the following year and a half.”

As the admin for Ravenloft, Møller understands what makes good persistent worlds with longevity. “First of all, especially for a roleplay server, it’s paramount to get people to actually meet. Create a location where people will naturally hang out and make sure there is a lot of passage through that area, e.g. having shops nearby and dungeons to the other side so people will continuously pass through this ‘hub.’ Don’t disperse your players unneededly (especially when the PW is small) and while creating sites of interest is essential for allowing other forms of (role)play to unfold, make sure that people will continue to return to the locations where other people hang out. The downside of the small size of NWN PWs is that if you are not mindful of the conditions, it will quickly turn lonely.”

More important is how you deal with people, which takes patience and keeping a cool head when you inevitably deal with drama. “This is the internet and people are passionate about their game. Don’t be arrogant or too set in your ideas, but create a positive atmosphere and be ready to compromise – and others will be much more willing to compromise too. On the other hand, it’s a good idea to formulate your values and core principles so you have a focus and can define the context wherein ideas should be discussed and what they should be weighted against.” 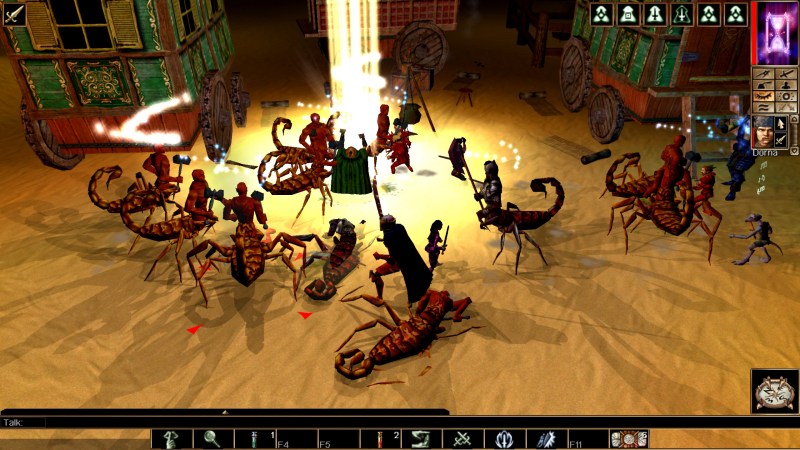 Above: Encounters in Persistent Worlds can get even more hectic than seen here.

Putting community first is how Beamdog is approaching the development of this Enhanced Edition. “Community is everything for Neverwinter Nights: Enhanced Edition,” Oster explains. “Nearly two years ago, we recruited an advisory council of leading persistent server operators, mod makers, and tool creators to help us on the project. We’ve brought a few members onto our team and have them digging through the code, looking from the outside in at how features are implemented and how they can better support the experiences they want for their player base. We have our Beamdog forums, which we check daily and a pair of public trello boards which we use for communicating our high level feature plans and for soliciting input on where to go from here. We are driven by the community.”

That focus on community includes utilizing community members in development, even going so far as hiring some of them. Bernhard Stöckner joined Beamdog as a developer on Neverwinter Nights: Enhanced Edition, but he’s been involved with the community pretty much since the beginning. He helped develop the original Neverwinter Nights Extender and serves as the technical administrator of Neverwinter Vault, a hub where all Neverwinter Nights custom content can be found. “Beamdog invited key community members to advise on the direction NWN:EE should take very early on – over two years ago, in fact. Some remain as advisors today, others have joined the team. We’ve put new forums up people can exchange themselves. We’re actively looking for suggestions and feature requests. We have weekly Twitch streams where NWN:EE is touched upon. We have developers (like me) lingering on Discord and in other places like our new forums, willing to answer questions and help with issues. It’s a great way to get a feel on the pulse of what is going on, and head off trouble early. I think we are extremely approachable, accessible and open and I’d like to keep doing it this way – especially in the Head Start/Early Access phase, where things occasionally break.”

“There is a lot of suspense in the NWN community. This kind of overhaul is something that I think everyone in the community hoped for, but never thought would happen,” says Greg Holmes, a volunteer who is helping Beamdog handle requests from the community. “While part of the community is waiting for the details to settle and hope for the best, most of the community is excited to see the game rejuvenated and expanded. Beamdog is taking a “Swiss-Army Knife” and adding more tools, designing them to be less likely to break, and making it smaller and lighter all at the same time. During the growth of the game through different developers, measures have been taken to work around restrictions, or settle for approximations. While there have been a lot of clever solutions created to add more material to the game in such sideways manners, it is still often the case that such methods lack the uniformity, flexibility, and stability of core features.”

Neverwinter Nights Extender: Enhanced Edition is also vital to making sure the old community isn’t left behind. “Neverwinter Nights is a game defined by its modability. That is to say, the game is driven by custom community content,” explains Gauthier. “If you’re picking up NWN:EE to play in 2018, you’re doing it to play custom content. There are limits to what you can do, however. The game exposes a large Neverwinter Script API to developers, but ultimately the game isn’t open source. Some things simply cannot be changed or accomplished. This is where NWNX:EE steps in. NWNX:EE exposes an API of its own – which is just a way to say that, through NWNX, you can call anything in the game code, and change whatever you want. You can do many things, from adding brand new scripting commands, to tweaking how the rules and mechanics that describe how the base game works at a fundamental level. Some functionality is not appropriate to include in the base game because it is unsafe or infeasible to do – NWNX:EE provides a way for developers to implement that advanced functionality themselves. As Beamdog works to expand the base game, NWNX:EE will follow, offering solutions to problems that have historically been impossible to fix.”

We keep hearing the refrain of “community” from everyone involved with Neverwinter Nights, and for good reason. As Stöckner puts it: “We know the community is the heart and soul of the game. It may not necessarily represent the average player that just buys the game to run through the campaigns it ships with; but it’s the community, and the things they create, that sustains the game. The enthusiasm people are showing for NWN is infectious for everyone on the development team!” That enthusiasm from the community is the very thing that continues to fuel Neverwinter Nights 16 years later, and the Enhanced Edition gives the community the tools it needs to keep it going for many more years to come.