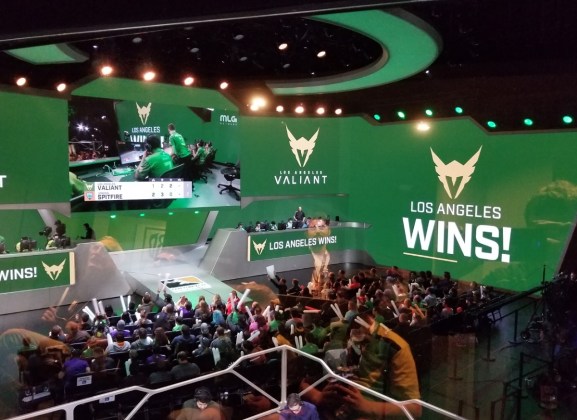 LA Valiant at the Overwatch League.

Over the last few years, both esports and blockchain-powered applications have gone a long way toward entering the mainstream. Esports has moved from being publicly ridiculed as “not being a sport” by the head of ESPN to being aired regularly on the “Worldwide Leader” and accepted as a medal sport for the Asian games in 2022.

Blockchains —  decentralized digital ledgers on which information is saved publicly — and their most popular application, cryptocurrencies, have moved from a seeming fad to a potentially disruptive alternative form of storing and transferring funds or information.

However, other than the launch of a few esports betting token ICOs, and LoL player Jeon “ikssu” Ik-soo’s quitting Jin Air Green Wings to become a full-time bitcoin trader in December, blockchain has made little impact in the esports industry. This may about to change.

As esports leagues have become franchised and more professional, there have been calls for more legislation, rights for players, fairer pay and contracts: in short, fewer gray zones and more transparency. Luckily, one of the main attractions of blockchain technology is that it is decentralized, secure, and wait for it… 100 percent transparent. That is, since each block is a permanent transaction record which can be added to a public chain, it’s impossible to falsify or eradicate — making it a perpetual source of information for parties to confirm and complete the transaction. In short: anyone can see when someone has — or hasn’t — held up their end of the bargain.

As such, here are three ways that we think blockchain technologies will push change in esports:

Aside from prizes from online competitions, one of the main income streams that helps hopeful pros to play full-time are tips from fans via the PayPal donation Button on YouTube and Twitch.

Back in 2013, a mystery donor known only as “Amhai” started handing out donations of as much as $50,000 to World of Warcraft streamers such as Isaac “Azael” Cummings-Bentley and Chance “Sodapoppin” Morris. Obviously these massive donations are not the norm, with most fans only donating a few bucks here and there. However, relying on money from donations has been dangerous due to the risk of donors asking for “chargebacks.” The chargeback system was designed to protect consumers from online fraud, but unfortunately, viewers abuse it.

Vice highlighted the example of iNexus_Ninja, an 18-year-old Australian, who used his parent’s credit card via PayPal to donate more than $50,000 in less than 24 hours, donating $11,500 Lea “LegendaryLea” May, alone. A month later he tried to chargeback the full amount via PayPal. Luckily in this case, the chargeback was rejected. However, in the vast majority of cases the chargeback will be approved, meaning the streamer not only has to return the cash but they also have to pay a fee to their payment processor.

If instead of using PayPal, gamers were to receive donations via cryptocurrencies over blockchains, this problem would be eradicated. One, you cannot ask for a chargeback via cryptocurrencies; and two, every transaction would be logged on blockchains, so it would be impossible to claim that someone else had made a payment other than yourself — the most common excuse for chargebacks. But keep in mind: while this is a huge plus for gamers, it could cause headaches for consumers who had their accounts hacked – blockchain users know if their money has been taken out of their e-wallet unwillingly, it’s almost impossible to get it back.

The concept of tipping with cryptocurrencies is not new. Dogecoin, a cybercurrency which just broke $1 billion in value, was originally used to ‘tip’ people for creating or sharing great content. The founder stated, “Think of it as a more meaningful ‘like’ or upvote, with real value that can be used all across the internet.”

One daily fantasy esports site that’s developed its own cryptocurrency is Skrilla — at Gamurs Group, we’re working with them to build up their identity on our flagship product and across social media. Skrilla tokens utilize the Ethereum blockchain and users can use them to participate in daily fantasy contests, but they can also enter a contest with fiat currency in order to compete for a fiat currency payout, too. There’s also Unikrn’s UnikoinGold, which was made specifically for esports betting. With the creation of more tokens likes these, we are likely to see cryptocurrency tokens make tipping more secure for gamers in years to come.

As leagues have become franchised, and prizes, salaries and sponsorships have ballooned with the sizes of global audiences, players’ rights have become the “elephant in the room” within the industry. In a recent interview, esports lawyer Ryan Morrison suggests that agents and sponsors have taken advantage of esports players’ inexperience with contracts and sponsorship deals.

There have been multiple examples of teams sidestepping contract clauses to get rid of players if their performance slipped, or avoid paying salaries which were due by imposing ridiculous “fines.”

Considering esports careers are notoriously short compared to other sports, a movement has emerged in the last few years to protect players’ rights. League of Legends producer Riot Games recently announced plans to launch an official players’ association, similar to a traditional workers’ union, which would defend players’ rights, and defend them in any conflicts arising around contracts or sponsorship deals.

Another option, would be for esports players to start requesting “smart contracts” which are saved on blockchains. Due to the decentralized nature of blockchains, all parties — teams, players and sponsors — would be able to set their terms, obligations and requirements in data on blockchains. This resource would then be saved infinitely, and cannot be adjusted or deleted by either party.

This would mean that players could set a certain percentage that they would be paid for each tournament win, or a monthly salary, which could then be actioned directly by information within the blockchain itself, meaning that teams and agents would have no choice in paying what was due. However while smart contract might offer more security for less experienced players, there is a potential they could put teams on the back foot, too. Victorious players might see tournament winnings go directly into their cryptocurrency accounts, however money being automatically deducted from accounts could have a negative effect on smaller teams with fewer resources — especially if these teams were hoping to make the money up, before paying out their losses.

But keep in mind: This is still a bit far off. For this to work, someone would first need to make a platform that checks if the clauses of the contract were executed, and then send the request to the smart contract for payment.

That said, having incorruptible blockchain agreements would give players a much better chance of success if they decided to take legal action for breach of contract. To keep things fair, teams could also embed certain performance statistics, and clauses onto the smart contracts, which would give them the right to terminate contracts, should players consistently drop the ball.

3. Getting rid of the middlemen to compensate players

As esports events grow in popularity, they are catching the eye of mainstream media channels, and in turn advertisers too, which is pumping funds into prizes. Last year’s Dota 2 competition, the International 7, ended up reaching almost $25 million in total.

While the majority of popular esports are team-based competitions organized in leagues or tournaments throughout the year, finishing with final events for the best teams, there are events like Hearthstone and Starcraft II, which individual players can compete in too. When representing themselves, rather than a team, players are at risk of being treated unfairly. However, to represent the unrepresented, a number of blockchain startups have emerged which aim to democratize access to tournaments and also make sure that players get their fair share of the prize money when the final whistle blows.

FirstBlood, which harnesses the Ethereum blockchain, decentralizes tournament setup and winnings distribution, meaning that players are guaranteed their winnings will be delivered straight into an e-wallet, rather than having to lose money through expensive money transfers or middleman payment processors taking their cut. Eloplay has a platform which detects cheating and foul play, and players get the company’s own currency, Elo-coins for every win.

So while most of the buzz around blockchains and gaming to date has been centered around cryptocurrencies designed for esports gambling, there are many ways which blockchains can make positive changes to the industry as a whole. In the same way as traditional sports have become highly legislated over the years to protect the interests of players and teams, emerging technologies will help esports get up to speed, quicker.

Riad Chikhani is founder and chief executive officer at Gamurs Group, parent company of Dot Esports, the premier destination for news and data on competitive gaming.