The PlayStation 4 continues to dominate the airwaves, at least when it comes to advertising on broadcast and cable TV. 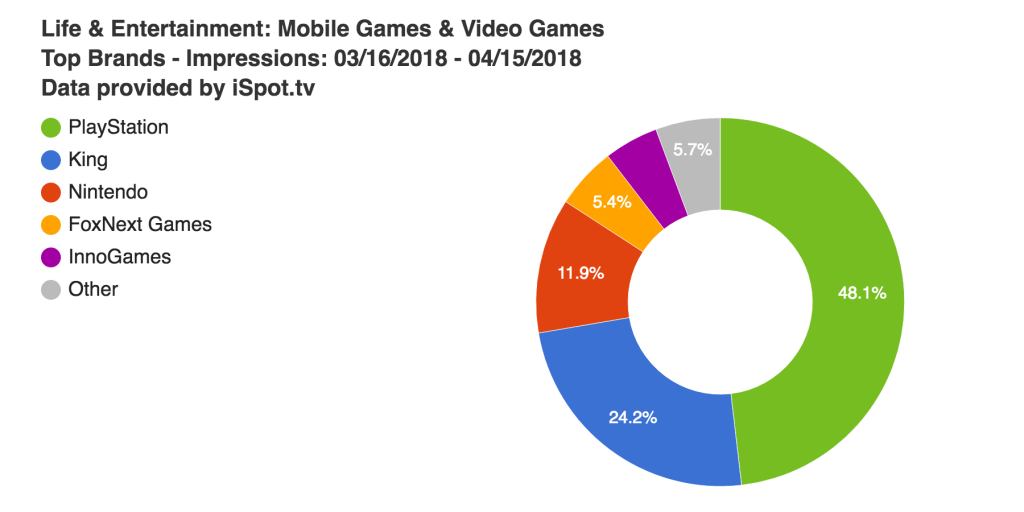 Below are the top five most-seen gaming industry brands from March 16 through April 15.

There were 2.3 billion TV ad impressions generated by gaming industry commercials during the period measured, with 19 companies spending an estimated total of $34.2 million to run 65 different spots nearly 11,000 times.

With nearly half of those impressions (1.1 billion or 48.1 percent), PlayStation once again has the most-seen TV ads. The brand aired 16 commercials over 3,400 times with “Anything Can Happen, Everything Will: Live Action” for Far Cry 5 generating the most impressions (416.1 million). PlayStation targeted a male-skewing audience, with ESPN, Adult Swim, and FX among the networks generating the most impressions, and SportsCenter, NBA Basketball, and Family Guy among the prioritized programming.

King takes second place with 554.8 million impressions resulting from six spots, all for Candy Crush, that ran 3,300 times. “Candy Crush Saga: Fearless Cat! Get That Sweet Feeling!” led with nearly 225 million impressions. The brand prioritized networks including ION, CBS, and Hallmark Movies & Mysteries, and specific programming such as Law & Order: Special Victims Unit, The View, and The Price Is Right.

In third place is Nintendo with 272.3 million impressions generated from 15 ads that had over 1,800 airings. Its most-viewed spot was “Get Together With Great Games,” which had 62.7 million impressions. Nintendo focused on reaching a family-friendly audience, with Disney Channel, Nick, and Cartoon Network among the networks that generated the most impressions, while specific programming prioritized by the brand included Teen Titans Go!, SpongeBob SquarePants, and The Loud House.

No. 4 goes to FoxNext Games, which aired a single spot, “Assemble Your Squad,” 649 times, generating 123.8 million impressions. The networks that helped produce the most impressions for the spot included FX, Fox, and FXX, while some of the programming that was prioritized included Deadpool (the movie), The Simpsons, and The Office.

InnoGames finishes out the ranking with 109.4 million impressions created by four commercials that aired 991 times. Clocking in with 44.7 million impressions was “Develop Your City,” making it the brand’s most-seen ad. Syfy, History Channel, and truTV were three of the networks that generated the most impressions for InnoGames, while Impractical Jokers, The Carbonaro Effect, and American Pickers were three of the top programs.