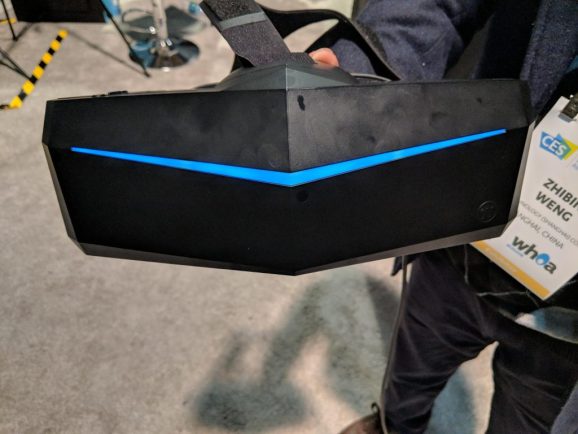 Several months after delaying “the world’s first 8K VR headset,” developer Pimax has revealed that its Pimax 8K has been postponed again — and apparently downgraded in performance, as well. Not surprisingly, the company’s Kickstarter backers aren’t thrilled by the news, which suggests that the headset will now arrive significantly after its originally promised delivery date.

Pimax made headlines by announcing its atypically wide-bodied VR headset with full “8K” capabilities, the product of allocating full 4K displays for both the left and right eyes. Originally set to be shipped in January 2018, the SteamVR-compatible headset promises a 200-degree field of view, laser tracking, integrated headphones, eye tracking, and a customized prescription lens frame. While the entire collection of features is ambitious for an affordable headset, 8K support is particularly challenging due to the extreme computing and display updating demands of such a high-resolution screen.

Unfortunately, the product has remained in prototyping stages due in part to claimed issues with its lenses. While the company has offered to seed 10 pre-production “M1” prototypes to Kickstarter backers for “closed beta” testing, shipment of the M1s has been pushed back due to multiple lens system redesigns. As the end of April draws near, the company hasn’t yet received its latest retooled lenses, but it currently expects to be able to start the closed beta process in May.

Beyond the lenses, Pimax 8K faces another major issue: a lower than expected refresh rate. Pimax initially said it would offer “8K X” and “8K” versions, the former with a 90Hz rate for next-generation GPUs and the latter with an approximately 85Hz refresh rate. But the company has apparently struggled with getting the lower-end headset to perform reliably and is now targeting an 80Hz refresh rate, lower than the 90Hz refresh rates of the HTC Vive, Oculus Rift, and PlayStation VR. Consequently, Pimax has said that “the purpose of the M1 closed beta is to learn from testers whether the M1 is good enough to ship.”

Backers of the Kickstarter campaign have expressed concern. “This doesn’t sound like you are satisfied with the product,” said one, while another threatened legal action or a chargeback: “I want to take my money because you are totally lost.”

Hopefully, Pimax will be able to work the kinks out quickly and get units out to its backers — broader retail availability depends on it. The company has pledged not to “consider retail until we have fulfilled all the Kickstarter packages,” but it has not provided an anticipated fulfillment date — just its plan to begin the 10-person closed beta in May.