The augmented reality experience Terminal 3 tells the stories of Muslims who face additional screenings whenever they want to enter the United States. Players take the role of a U.S. customs officer who must interrogate people at an airport. Creator Asad Malik developed it in partnership with RYOT, and it debuted at the start of Tribeca Film Festival in New York last week.

Terminal 3’s event setup is unique. It takes place across two rooms. In one, players don a Microsoft HoloLens headset and use voice commands to ask one of six holographic characters increasingly personal questions. Once they’re finished, they step out into another room — where they meet the actual people the characters are based on.

“It’s not about ideology. Islam itself can be an ideology, but Muslims are people. What we’re trying to showcase are people and their stories,” said Malik in a phone call with GamesBeat. “We have people who are outspoken atheists. We have other people who are much more religious and follow the path a lot more seriously. We also have a lot of diversity in terms of gender and age among these six people. We’ve found them through personal connections in one place or another.”

It’s also based on Malik’s personal experiences. He’s working on an undergraduate degree at a university in Vermont, but he is from Pakistan. The title comes from Terminal 3 in Abu Dhabi International Airport, which he went through before visiting the U.S. for the first time. It was also where Malik had a terrible experience with a customs officer, though he notes that not all his encounters have been as unpleasant.

“If you strip away all the institutional agenda, it’s really just two people with an absurd power dynamic sitting down, how the conversation goes while one person tries to figure out the other person,” said Malik. “It’s a weird, rich way to get to know someone, if you desire to. That’s kind of what we’re trying to enable with the experience. You can ask questions that would lead you to a rich story, or you can ask questions that may not.” 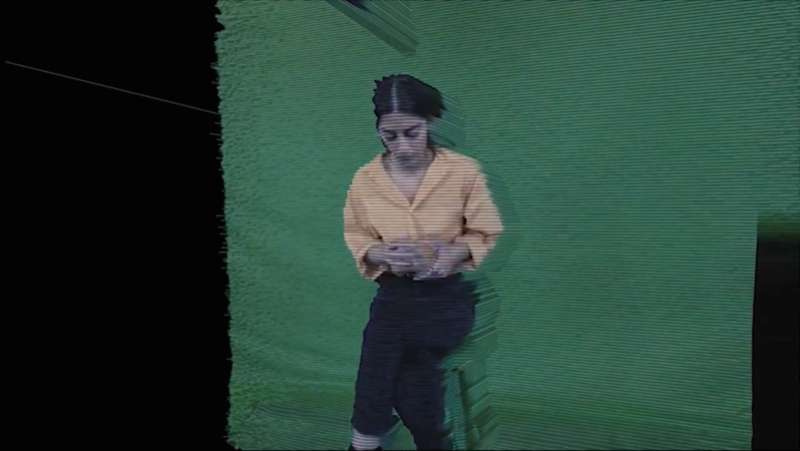 Above: A behind-the-scenes look at how 1RIC motion-captured actors using Depthkit for Terminal 3.

Air travel is often an ordeal for folks who are or simply look like they might be Muslim. Islamophobia continues to rise year after year. And Terminal 3’s Tribeca debut is especially timely, as the U.S.’s controversial immigration policy heads to the United States Supreme Court later this week.

Putting these experiences into a context is part of the reason why Malik chose to create it in AR instead of VR. He describes much of virtual reality as “a dreamlike experience, removed from reality.”

“AR is all about your context. I think Terminal 3 could not be displayed in China. It wouldn’t work. It has to be here. It’s in the context of this space,” said Malik. “It’s all about bringing another person to your place, rather than you imagining that you’re in someone else’s place. Someone else’s place is too dreamlike. It’s too easy to ignore it almost as fantasy. However, if someone else enters your space, as an unexpected addition, and you engage with them as if they’re real—when there’s a hologram in your space, you look around and everything you see is reality except the hologram.”

RYOT director of immersive development Jake Sally says that it’s crucial for creators to ask themselves why they’re making something in VR and AR instead of just shoehorning something into those new mediums. The company has a long history of developing documentaries using VR and 360-degree video, like 10 Shots Across the Border.

In the case of Terminal 3, Sally points to the voice commands and the perspective as unique characteristics that bring the experience to life. It necessitates that people engage with it in AR.

“But the power of voice, it does this thing to your brain where it adds that extra layer of trickery. As soon as I start talking to something, suddenly it becomes infinitely more real,” said Sally in an interview with GamesBeat. “In this project specifically, looking at immigration from two perspectives simultaneously, both as someone interrogating and as the person being interrogated, is really interesting.”

Malik says that he’s seen festival goers react differently to the experience. A lot of them have had strong emotional responses — particularly once they exit the first room and meet the flesh-and-blood person whom they’ve been “talking to.”

“Now that people are trying it, I see how different people treat it differently. It’s interesting,” said Malik. “Some people are afraid. Some people are there thinking, wow, I’m a target, or I don’t want to say something stupid, but I have to ask these questions. They kind of whisper it and get through it. Other people really get into the character and kind of demand these questions of the hologram. I feel like a lot of people’s political views on immigration and things like that come through how they talk to the hologram.”

Part of the experience, as well, is its “dynamic aesthetic.” When you sit down to interrogate someone in Terminal 3, you’re presented with two dialogue options that you select by speaking it aloud. The person you’re talking to appears at first like a sketched-out glitch, but once you start getting to know them, they start blooming in full color.

“At a high level you’re embodying someone who’s passing through so many people day in and day out, and everyone becomes just this abstract object that you’re pushing through the mill. But once you start getting into these real, deep, emotional moments, they become more human,” said Sally. “You don’t really see that in a lot of experiences. To me, again, it helps to justify the, ‘Why AR?’ In this setting, there’s a relatively complex branching narrative to it, depending on the choices you make. It’s cool to see that there’s direct one-to-one impact based on what you’re saying. It’s changing not only the craft of the story but also the aesthetic of the entire world that’s being inhabited.”

To further Terminal 3’s development, Malik received the Unity for Humanity grant, which is an annual award of $25,000 for projects that “[deal] with issues of humanitarian, social, environmental, educational, health care, science issues and themes.” It’s the first time Unity has offered the grant.

“Asad was in the midst of creating it, and in order to finish it, he was looking for some support,” said Unity producer Amy Zimmerman in a phone call with GamesBeat. “The grant program came along at the same time as we learned about Asad and his project. His project really maps back to what we’re trying to achieve with this grant – to enable our creators to tell their stories using these tools, and tell sometimes tough stories using our tools.”

Zimmerman is a producer on the Made with Unity team, which promotes projects made with that game engine. According to the company’s numbers, 60 percent of AR and VR projects are developed using Unity. And she says, she sees more diverse perspectives than ever when she’s looking through projects.

“We’re giving tools to all types of creators, whether they’re veterans or new users of the technology,” said Zimmerman. “It’s allowing for people who’ve never had the chance before to tell these stories, to show their perspectives. People who are really passionate about things that are happening in our world.”

The stories in Terminal 3 are each unique because they’re the lived experiences of individuals. But they’re not so unique in that many people have to deal with this kind of situation every time they travel. And this happens all the time — like when Malik tried to fly his parents to the Tribeca world premiere so they could see his project.

“But that didn’t quite work out, because both of their visas got rejected,” said Malik. “Both of them were interrogated in Pakistan by U.S. customs. The U.S. customs went into their last 50 years of family history – where are your step-siblings, is this relevant, where did you travel on this date – and eventually they had their visas rejected for no apparent reason. So they couldn’t make it. That’s as ironic as it gets.”