You can think about it as Pokémon physical card games meet the blockchain. You’ll be able to print out your own cards, but they will have their own unique identification thanks to blockchain, which is the immutable and transparent ledger technology behind cryptocurrencies such as Bitcoin.

The digital-to-physical card game is aimed at crypto geeks, card hobbyists, and digital collectors. Players will be able to buy, sell, trade, collect, and customize cards. The proprietary blockchain protocol decentralizes ownership and distribution, allowing players to establish clear ownership. And players will be able to mine for limited-run booster packs and evolve and card they own by adding custom art skins. You can also combine characters and resources to level up cards.

Creators will also have the ability to publish and license original card art based on reference materials provided by Volition during set releases. 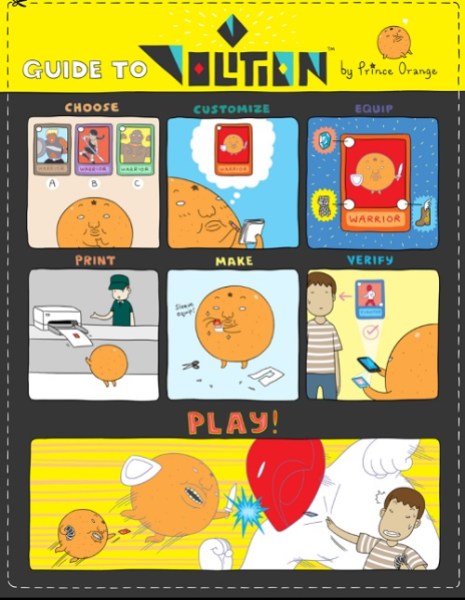 Above: You can print out your own Volition collectible cards.

“The games industry provides some of the most compelling opportunities and use cases for blockchain, however, most projects today focus on leveraging blockchain within centralized games and platforms, which fundamentally misses the point of the technology,” said Patrick Meehan, cofounder and CEO of Cryptogogue, in a statement. “By building Volition on a foundation of blockchain, not just from a technology perspective but also with a decentralized business and operating model, we will be among the first to embrace the full spectrum of possibilities afforded by blockchain in a collectible gaming context.”

Rivals have created blockchain games such as CryptoKitties.

As the market for blockchain-based digital collectibles gains traction, applications in the physical world have remained largely untapped, Cryptogogue said. Through a hybrid digital-to-physical and print-on-demand model, Volition will make blockchain technology more accessible to anyone with a passion and a printer. This approach also means no publisher will ever retain ownership over the ecosystem or future viability of the game.

The company said it has applied for patents on enabling the mining of booster packs in an unpredictable yet deterministic way. As such, the company said Volition is evolving free-to-play principles and mechanics in a way that offers a more tangible experience both in gameplay and in extractable value. For hobby stores, it means that they won’t have to sink costs into stockpiling inventory, as players will be able to print cards on demand.

Above: Players will be able to evolve and create their own Volition cards.

The Volition multiverse will grow and change through set releases, with each including a base set along with several subsets. Creators and collectors can skin any card they own with custom art. Along with each new set release, Volition will also release reference art to inspire the community to create original artworks in unique art styles based on the latest theme, which can be published on the blockchain along with licensing terms.

The blockchain technology behind Volition means players and collectors can truly own and track the origin story of each card, from when it was first mined to who’s owned it, and even any digital signatures added by artists or other VIPs. The digital-first nature of Volition means characters and resources can be combined to level-up and add gear to any card. Some cards may level-up in a predictable fashion while others may have an element of randomness, and the mechanics may change from set to set.

“With Volition, the blockchain and technology innovation will remain at the core of the experience, but designing a game that is fun, accessible, and engaging is also a priority,” said Ken Pilcher, cofounder and lead gameplay designer of Volition, in a statement. “The intuitive gameplay combined with the endless customization opportunities means those new to CCGs will be able to quickly pick up and enjoy Volition, while more experienced and invested players can dive into the meta-game experience of mining, customizing, and card evolutions.”

Cryptogogue was formed by a lineup of games industry veterans, including the designers behind the award-winning indie trading card game The Spoils. The company has three cofounders and three advisers. And it has additional contributors as well. The company is self-funded.